Marco Rubio's Challenge to the Moderates 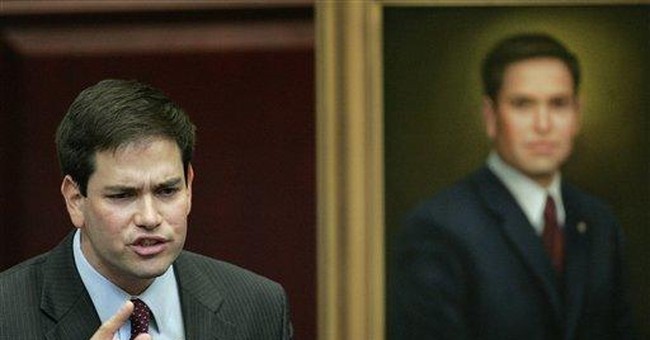 Marco Rubio has sticky fingers, and he wants to rinse them off.

“Some of the pancake syrup got on my hands, I’ll be right back,” he told me in the lobby of his posh Dupont Circle hotel in Washington, D.C. just after breakfast.

Maybe he should’ve kept his sticky fingers. After all, the Florida House Speaker might have to go to some extraordinary lengths to get the cash he needs after the release of his latest fundraising numbers: he came in at $340,000, compared to his rival Gov. Charlie Crist’s $4.3 million.

But his attitude towards such figures doesn’t imply that he’ll resort to stealing to get the cash.

“I’m not involved in a fundraising competition,” he told me. “I’m involved in an election. In an election where the issues and the differences between myself and my opponent in the primary are significant, my job is just to go out and tell people what I stand for.”

The rash of blogger attention thrown at Rubio in the past few weeks has transformed the Florida Senate race from a narrative about a highly popular governor’s possible ascension to the U.S. Senate into a fight over the future of the GOP. After the fundraising numbers came out, a story broke that said Rubio was thinking about removing himself from the race, which the Speaker says is patently false.

“That’s just a story someone leaked to a blog in hopes that I would move or force me to do something to sort of undermine me, but there was never any internal discussion about [it]. That’s just not true,” he said.

It may be overly optimistic, given the current Florida economy and the fact that the state has three of the top twenty most expensive political markets in the country. Rubio is banking solidly on his prospects as an underdog, flooding the media market with tales of a Conservative David going up against Goliath The Moderate.

Rubio has challenged Crist to a series of debates to talk about these issues, and others, inside the state or out. Crist has refused, saying that he was too busy governing Florida, despite spending almost every single day of June raising money for his Senate campaign.

Rubio is now hedging his bets on winning support from Floridians who have already awarded his competitor a 60% approval rating, and from national GOPers disillusioned with Crist’s RINO politics. There is talk of the conservative Club for Growth bankrolling his campaign, and of Rubio at least using the campaign as a starting point for his entrance on to the national political scene.

At the very least, Rubio has managed to move the ball a little farther over to the right in a race that would’ve been solidly middle-of-the road without him. But the Speaker is adamant about his political career consisting of ideas instead of politics.

“For folks that express concern… about how this race is maybe not the best race for me, or that there may some other place for me to climb the political ladder; I explain to them that there are more important things in the world than Marco Rubio’s political ambitions,” he said, harking back to a common criticism of his competitor. “My political career is not as important as the fact that my kids are going to inherit a country worse than the one I was left with, and that that’s why I am motivated to run for the United States Senate.”