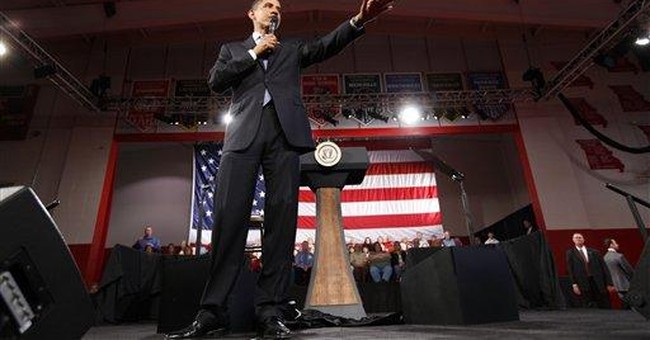 Those praising Obama on his 100-day mark are trying to have it both ways -- both claiming Obama has mastered Washington with his oratory and brilliant political skills and excusing his missteps because he hasn't been given enough time to succeed.

In other words, the only things Obama hasn’t done well are because he’s had too little time to do them.

The Houston Chronicle told its readers that “Measuring the performance of a new president at the first hundred days of his administration is a political parlor game…” but that Obama has “demonstrated his self-assurance and command of complex issues ranging from foreign affairs to the environment to human rights.”

Lincoln Mitchell, a professor at Columbia University, wrote that “The jury is still out on a number of other issues,” but also “not only have Obama's first 100 days been by far the best of any president of my lifetime, but they began not a day too soon.”

In the minds of his supporters, Obama has made immeasurable improvements to the economy but not enough time has passed to really see the results of those improvements. Obama has done great things in Iraq and Afghanistan, but it is unclear how that will really end up because withdrawal isn’t over yet. Obama has improved gun rights, women’s rights, the environment, race relations, and the likeability of Presidential dogs – but the proof will come after 4 years, not 100 days.

House Speaker Nancy Pelosi said Obama has been a “great success,” but that “it is just the prelude for the work that still needs to be done.”

And so it went, in the Philadelphia Inquirer, The American Prospect, The Atlantic, and a host of other liberal publications. The New York Times ran a 100-day editorial by Robert Dallek, claiming that cynics scoffed at the country’s “love affair” with Presidents who made them feel good even when things are rough, but that didn’t matter, because “His program of reforms at home and abroad is not simply an answer to the difficulties of our time but also a call to Americans to believe once again in the greatness of the nation and the promise of American life.”

Evidence as to the progress made by such reforms weren’t included in the column.

Eli Lehrer, senior fellow at the Competitive Enterprise Institute, summed it up by saying he, too, thought the jury was still out on the progress the President has made, but “The 100 day mark has a lot more to do with the media than any real way of evaluating a president.”