“No Comment” from Three Turncoat Senators On Future “Stimulus” 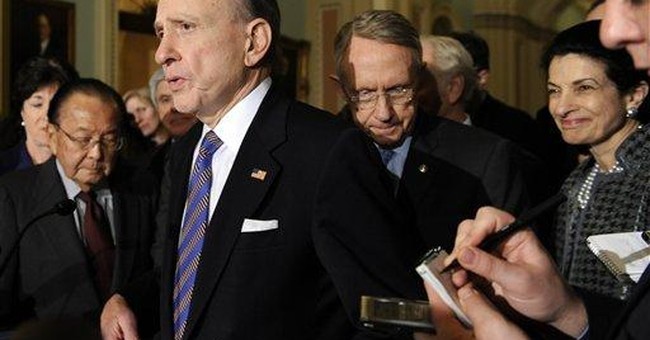 The three Republican Senators who joined with Democrats to pass the first stimulus package expressed hesitation over the idea of a second package but could not reject the idea outright.

On Tuesday, Speaker Nancy Pelosi said she would “keep the door open” with regards to another stimulus bill, and the Politico reported that House Appropriations Committee Chairman David Obey had already begun work on it.

In response, Maine Sens. Susan Collins and Olympia Snowe said it would be “far too premature to be discussing the possibility” and that “it’s too early to tell” whether or not the stimulus bill would be appropriate,” respectively. Sen. Arlen Specter, (Penn.) simply “chose not to speculate” on the prospect.

The initial $787 billion stimulus measure was passed only last month. Collins, Snowe and Specter received widespread criticism after they voted with Democrats, denying Senate Republicans the opportunity to filibuster the bill.

“Congress isn’t even waiting around to see if the last stimulus worked before declaring that they want more spending. This proves that ideology rather than economics is driving the calls for stimulus bills,” said Brian Riedl, Senior Federal Budget Analyst at the Heritage Foundation.

In an interview on February 24, Republican Party Chairman Micheal Steele told Fox News that he would consider withholding campaign funds from the Senators in their coming reelection campaigns. But the RNC later took his words back in a memo to MSNBC: "The RNC has no intention of getting involved in primaries.”

It might not matter to Arlen Specter. He chose to ride the fence with a second stimulus amidst speculation that he will switch parties after his vote on an upcoming Card Check bill. The Daily Kos suggested that a vote in favor of card check could mean Specter will leave the GOP, while a vote against it could mean he’s sticking around.

In Maine, the stakes may not be much higher. Julie Ann O’Brien, executive director of the Maine Republican Party, told Newsmax.com that she didn’t expect Snowe or Collins to suffer politically, given the centrist leanings of many conservatives in her state.

That’s not likely if Grover Norquist has anything to do with it.

“This is ‘Keynesian Kitchen Sink Economics’ at its best. Neither history nor the fact that the markets aren’t buying the “stimulus” seems to have taught Pelosi, Obama and Reid a lesson,” he said.

“It is important that people all across this country realize that we have a different approach. Its important that we put together our plan, our budget, and get together what we think would be our preferred approach,” said McMorris Rodgers.

Pence hinted at future pushbacks against those who won’t go along with a more conservative fiscal plan.

“Simply talking about self restraint, about being more responsible, is not going to capture the imagination for the American people,” he said. “Republicans are going to offer a bright line on fiscal restraint, and growth, and I think you’ll be pleasantly surprised at the degree of boldness that we offer.”