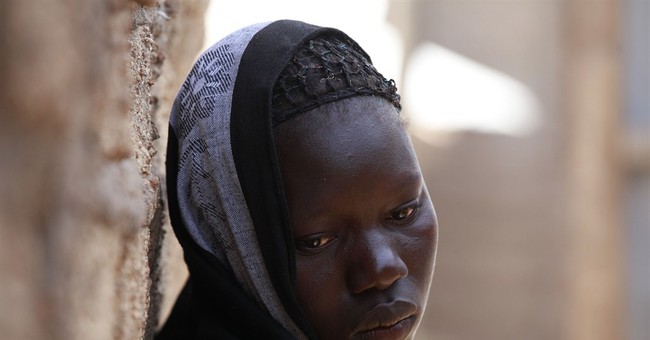 Here we are, a month after the kidnapping of some 300 girls by a radical Islamic group in Nigeria, and there are still many in the West who don’t get it. They just don’t understand the motivation of the kidnappers.

Radical Muslims want to take over the world. They divide it into two parts---those who submit to Allah and therefore are at “peace” and those that are at war until they are made to submit to Allah. These are the houses of peace (Dar al-Islam) and of war (Dar al-Harb).

By misreading the motives of Boko Haram, the kidnapping group, we are misreading what the whole conflict is all about; the same applies to radical Muslims everywhere.

Recently, on my radio show I interviewed Dr. Paul Marshall of the Hudson Institute. He is the author with Lela Gilbert of Their Blood Cries Out and Persecuted: The Global Assault on Christians (with Lela Gilbert and Nina Shea).

We spoke specifically about the kidnapping of the girls, which has garnered international attention. It’s good that this terrible deed has made headlines. But it’s tragic that when Boko Haram burned down a school a few months ago, killing 90 children, that didn’t make news.

The same applies when they bombed several churches at Christmas during the worship services in 2011. Since 2009, they have killed thousands of people, mostly Christians.

Paul Marshall said that too many in the American state department are not willing to recognize that Boko Haram is motivated by their religious ideology, i.e., radical Islam. He said these government officials have such a secular mindset that they think every motivation is merely money, sex, or power---but not religion.

Marshall also referred to an article from the New York Times (4/15/14), which stated that the group’s motivation is unclear: “Boko Haram’s exact goals, beyond a generalized desire to undermine the secular Nigerian state, remain mysterious.” Mysterious? It’s about radical Islam.

The leader of the Boko Haram movement said on video: “Everybody knows that democracy and the [Nigerian] constitution is paganism. You Christians should know that Jesus is not the Son of God. This religion of Christianity you’re practicing is not the religion of God. It’s paganism. We are trying to coerce you to embrace Islam because that is what God instructed us to do.”

Commenting on that quote, Marshall said, “I don’t know about you, but that sounds quite religious to me.” At heart, this is a religious conflict. In short, convert or die.

The 300 or so kidnapped girls are mostly Christians. Now, about 100 of them have “converted” to Islam. Of course, they had little choice in the matter if they like having their heads attached to the rest of their bodies. Convert or die.

The Christians in the largely Muslim north are the biggest targets of Boko Haram’s violent jihad.

The second largest targets are Muslims who don’t go along with the radical Muslim’s version of strict Islam. The burning of the school a few months ago killed mostly Muslims. Boko Haram is at war with Western education which they feel undercuts Islam.

A few years ago, before most of us had ever heard of Boko Haram, our ministry produced a television special, which I hosted and helped produce with John Rabe and Susan Dzuro: Militant and Misled? Understanding Radical Islam in a Post-9/11 World.

One of our guests for that special was Dr. Zuhdi Jasser. He is a Muslim physician living in Arizona. He is the president of the American Islamic Forum for Democracy, which advocates for the separation of mosque and state.

As a medical doctor, Jasser notes that if you have the wrong diagnosis, you won’t get the right cure. Since too many today treat radical Islam in a politically correct way, then we’re just “chasing our tail” in trying to deal with the real enemy that wants us to convert or die.

Dr Jasser said: “Think of the millions of dollars in the leadership of the Pentagon that wrote a report on Fort Hood, that didn’t have the courage to talk about the theological aspects of what drove [spree shooter] Nidal Hassan…demonstrating that we are completely wasting our time and not addressing the root causes which are the separatism of political Islam from American type societies.”

The 80-plus page report from the Pentagon didn’t mention Islam, the shooter’s name (which is Islamic), what he shouted before he shot people (“Allahu Akbar!”), that he gave away Korans earlier, and so on. In short, the report from the Pentagon ignored the religious motivation of Hassan---just as many are ignoring Boko Haram’s motivation today. How can we deal properly with this enemy if we pussy-foot around their stated goal?

Dr. Jasser adds, “I’m in no way saying that Islam is the problem, but what I do want people to realize is that there are some interpretations of Islam that are the problem.”

Dr. Paul Marshall welcomes the attention finally paid to the evil work of Boko Haram, but he laments that after this crisis ends (hopefully with the girls being rescued), this group will likely continue its killing of more and more people in the name of Islam.