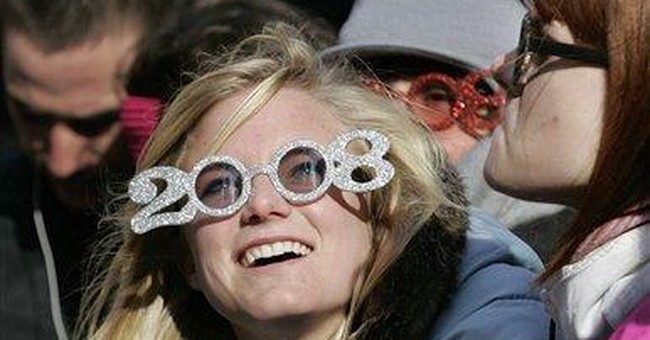 2008 years from what? Most people still know (I hope) what event initiates our calendar. Few people know why. That’s because we have, long ago, stopped paying attention to history.

One of the reasons that it’s so hard to read and understand ancient history books is that they lack a unified chronology. Herodotus, Plutarch, etc., never say ‘this happened in the year X’. Instead they give you a lot of ‘in the tenth year of the reign of emperor such and such’, ‘or in the year of the 50th Olympiad’ etc. Modern readers scratch their heads and ask, ‘Why?’

They should be asking, ‘Why not?’ We’re so used to the idea of a collective, universal and non-resetting dating system that we take it for granted. The citizens of the rest of history would be as confused by us as we are by them. What, after all, is the point of knowing the timing of the events of other civilizations in relation to our own? Who cares? We’re human, and they barely are. We have gods who we love and they have gods who we hate. We have nothing to learn from them. They are a threat to us and our society. The only dates in their history that we care about are the dates of the wars they have had with us, and we already know those dates. They are either dates of our glory, in the battles we’ve won, or dates of their shame and treachery, depicting the battles they stole from us. There is, ancient man would say, no such thing as history. Everywhere there is chaos, except where our emperor/king/sheikh/chief/president-for-life reigns, and when he dies, the clock must be re-set. The King is dead, we shout, long live the king, and the calendar goes back to year one of the new reign.

That started to change with a birth. Eastern, probably Babylonian, scholars noted the signs of a birth of a great king, not their own, nor even Rome’s. They traveled across the known world daring many dangers and passing through the fiefdoms of many gods and kings to find him. They brought him gifts of imperial tribute, gold and spices, even though they already had a king back in their homeland and the world already had an emperor. They did this under the nose of a usurper who reacted with such rage that he unleashed a genocidal rage against all of the boys in that town. The boy-king became a refugee.

When he came home, he took up residence in a town known for its mix of races and languages. He worked with Latin speaking foreman, Greek speaking architects and learned the Hebrew of his fathers from rabbis. At home he spoke the Aramaic that his ancestors had picked up after their forced march into Babylon.

Later he became a teacher. He taught Torah to a Samaritan woman, breaking religious, ethnic, and gender barriers at the same time. He reasoned with rabbis, debated priests, instructed Roman centurions. When he died, he died with a sign above his head in three languages:

Jesus of Nazareth King of the Jews.

Of course, Pilate sold him short. When Jesus rose from the dead, he defeated Rome. They assassinated Him, but he came back. He won. He became, in Caesar’s stead, emperor, not just King. Lord of the world, not just of Judea. It would take centuries before the world learned of the existence of it’s new emperor, but eventually the ambassadors reached the known world. It met it’s new Lord, and it knew what to do. A new calendar was needed. When a new emperor comes, the clock is reset: It is year one. On it goes until the emperor dies and his reign ends. Then a new emperor and a new calendar. But what if we had an emperor who will never (again) die? Then each generation will share the same calendar. We won’t date events by ‘the 10th year of the emperor Augustus’ or the 8th year of the reign of President Bush, or the 50th year of the glorious leader Fidel. We’ll calculate them by the 2008th year of the reign of our lord and savior, Jesus Christ. We’ll abbreviate them with AD (anno domini) using the Latin of the alleged city of eternal conquest, which remains now, only as a linguistic artifact preserved only by the kingdom that replaced it.