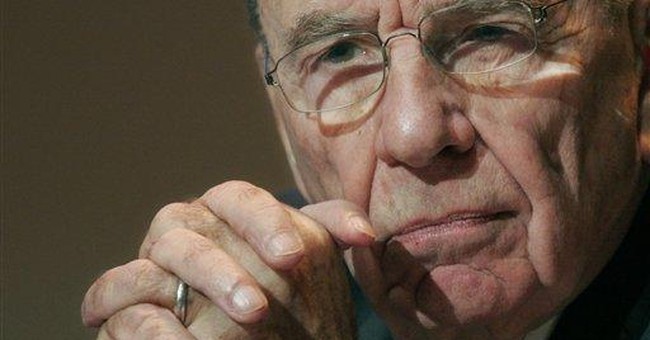 Mr. Murdoch, the Bancroft family did a big favor for you last week. They refused to sell the Dow Jones Company to you for more than it's worth. Here's my advice: thank God, go home and then build the world's best business news organization from scratch.

It's not that you couldn't divide and conquer: the Bancrofts are in—what?—their fifth generation? None of them really cares much about the inner workings of the newspaper. They just want cover so that they don't get hammered by the rest of the press for selling a precious national resource to that upstart from down under. In the end, sixty bucks per share can keep the heirs in speedboats and modern art for at least another generation, and if they can get it and save face at the same time, they'd be crazy not to.

But is the deal really good for you? The price is, as you recently said "MORE than fair". If it's more than fair to them, then it's less than fair to you and yours.

Yes, owning Dow Jones would help as you build the greatest media corporation in the world; but you can also do that without Dow Jones. Yes, it would help Neil Cavuto build that Fox fn of yours; but Neil knows what he's doing. He needs sous chefs not divas in his kitchen. And yes, the Journal Ed Page is the best conservative op/ed page in the world; but that's just the opinion operation. The news guys are further left than the Post (Washington, not New York) or the Times (New York, not Washington). Their reporters win most of their Pulitzers exposing bad businesses, not understanding good ones. Besides, the WSJ Ed page isn't a business page anymore, it's mostly politics now.

So what should you do? Build from scratch the way you did with the Fox News Channel. You didn't teach a dinosaur to dance, you started with a mammal and it worked. You've shown that TV reporters can do every bit as well as print guys in business news. Even over at CNBC, the on-air people easily have the intellectual heft of their print correspondents. Kudlow's the best of them - grab him if you can.

As large sections of the newspaper industry shuffle off into oblivion, lots of print talent is going to hit the street looking for work. You can buy teachable news-gatherers at a discount, or you can buy a recalcitrant news bureaucracy at a premium.

Ah, there's still the brand thing. Dow Jones is a powerful brand, but, you've got a powerful brand already - Fox. If you want a more business-specific brand, you can build one. If you still want to buy an established brand, buy Forbes. They've already shown Elevation Partners that they're open to outsiders: Do you think they'd sell equity to Bono, but not to you? And if they aren't willing sell the company outright, maybe they'll co-brand. You've already started that process on Saturday mornings with Forbes on Fox. The Forbes family is chock full of creative people, and personally, I think their business branding is better than Dow Jones.

And besides, the Forbeses, unlike the Bancrofts, actually seem to like capitalism.