Not His Magnum Opus 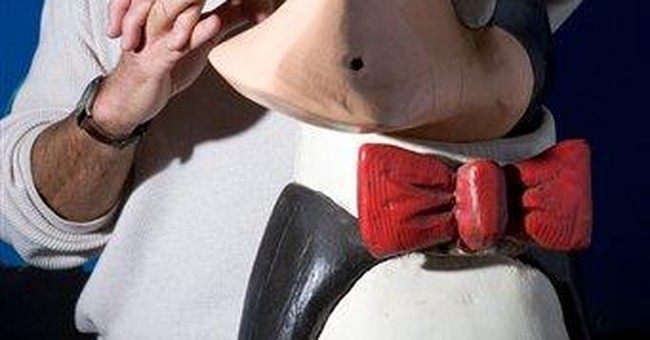 Cartoonist Berkeley Breathed composed a truly revolting edition of “Opus,” just one week before Fathers Day. The cartoon published Sunday June 10 was appalling not only for its unadulterated, unapologetic male-bashing. The cartoon is also a sickening foretaste of what awaits us as same sex parenting becomes normalized.

The cartoon in question shows three characters talking about a boy in their class who has two moms, and no dad. They speculate, “Makes you wonder how he’ll do without a male role model in the house.” The last panel supplies the visual answer. A misogynist, inebriated white male throws a TV out the window, while swearing at a baseball player. We can easily infer the answer to the kids’ speculation: Kids are better off without fathers, since fathers are drunken, violent slobs.

You wouldn’t think so much power could be contained in a single panel of a cartoon strip. But look at the image of the man: he is holding a can, probably a beer can. He is unshaven and has a cigarette hanging out of his mouth. He is wearing a cap that has bikini barely covering a pair of orbs that suggest women’s breasts. Woman-hating. Drunk. Smoker. Barbarous. Unkempt. Yes, any child would be better off with two mothers.

Yet the more successful they are at convincing people that mothers and fathers are indistinguishable, the more people will conclude that fathers are disposable. This is for two reasons. First, the connection between fathers and children is intrinsically more tenuous than the bond between mothers and children. The social purpose of marriage is to strengthen the attachment of fathers to their children, as David Blankenhorn’s book, The Future of Marriage so ably shows. In a world in which mothers and fathers are considered indistinguishable, it is fathers who will be discarded.

Second, our social universe has already marginalized fathers from the family. The feminist movement teaches that men are unnecessary. Inculcating the belief that mothers and fathers are perfect substitutes can only accelerate that trend. The microscopic number of gay male couples who adopt are not going to interrupt that. No one will look at a pair of men parenting a child and say to themselves, “You see, it is just as I have always suspected. Children don’t need mothers.” Yet that is exactly the conclusion people draw from a pair of lesbians raising children together.

Which brings us back to Opus the Penguin. Berkeley Breathed wanted his readers to draw the conclusion that men are unnecessary and fathers are dispensable. I beg to differ. Kids thrive when they live with their own fathers, married to their mothers. Social science has definitively proven this point. I am running a feature on my website right now called What Dads Do. Men and women alike have been writing in to me, describing the irreplaceable contributions that their fathers have made in their lives, or that their husbands have made to the lives of their children. This vulgar cartoonist has no business trashing an entire class of people.

This is anti-male hate speech. If you doubt this, try reversing the images. Suppose he had drawn a cartoon featuring an innocent white male, minding his own business off-stage. Suppose he then showed an unattractive, stereotypical lesbian or gay man. The Lambda Legal Society would go ballistic.

It is time for women who love men to go ballistic. No doubt, many embittered women will complain that all men are exactly as the cartoonist depicted them. For every one of those women, there are easily five or more who appreciate the contributions the men in their lives have made to their families. I know that I don’t appreciate the implicit attack on my husband, my father, my brothers, and my brothers-in-law. These fine men serve their families and protect the weak.

Women, we need to take action. I wrote a letter to the editor of my local paper, urging that they discontinue Opus. I urge all of you to do the same.