Why McCain Shouldn’t Want Huckabee on the Ticket 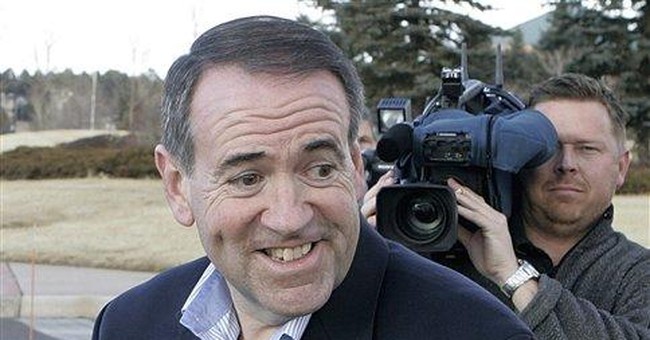 Take Mitt Romney’s oft-repeated characterization of conservatism as a three-legged stool, with economic, defense, and cultural legs. McCain is strongest on defense, and somewhat weaker on the other two. But it’s more complicated than that. McCain is not consistently bad on economic or cultural issues. He’s better on spending than on taxes, better on abortion than on stem cells or immigration. What McCain is—and this is what drives the talk-radio crowd crazy—is consistently unreliable.

Huckabee shares much of McCain’s consistent unreliability. Huckabee is staunchly conservative on abortion, stem-cell research, and homosexual marriage—and that, coupled with his vocal Evangelical faith, is enough to spark confidence in reporters that they’ve identified a member of the species “conservative.” But Huckabee has been weak on other cultural issues, like immigration; and he’s highly suspect on fiscal ones. Because of his propensity to tax and spend—and to speak like a populist—the man from Hope has few allies on Wall Street. As for national defense, Huckabee is mostly a blank slate.

This package doesn’t add up well for a potential McCain VP candidate. Where McCain is consistently weakest—on fiscal matters—Huckabee is weaker still. Where McCain is equally weak, on cultural (or law-and-order) issues like immigration, Huckabee is similarly so. Where McCain is strong, on national defense, Huckabee offers only Obama-like—or Clinton-like—inexperience. Where Huckabee is strong, particularly on the touchstone cultural issue of abortion, McCain is already on solid ground. It’s hard to see anywhere where a McCain weakness would be complemented by a Huckabee strength.

McCain’s VP selection needs to balance three important considerations. Because of McCain’s age, his vice-presidential nominee clearly needs to be ready to serve as President. To solidify the base, his choice needs to be someone whom conservatives like. Lastly, McCain doesn’t want his choice to compromise his high stock among independents. So what he really needs is the right kind of conservative—one ready for the job, and at least not unappealing to independents.

Rudy Giuliani is ideal on the last two points, and his record is consistently conservative on fiscal and defense issues. But he’s far less conservative on cultural ones, most visibly on abortion. Giuliani is well liked on Wall Street, is clearly ready for the job, and is actually more conservative on the whole than Huckabee—who is plainly tempted by the siren song of Big Government. Additionally, Giuliani seems to be genuinely liked by McCain, is appealing to independents, and is a good debater and campaigner. But Giuliani’s weakness on the cultural leg would make him a tough sell with some conservatives—his endorsements from the likes of Dennis Prager and Steve Forbes notwithstanding.

McCain could pick Fred Thompson. But this wouldn’t help much with independents, and it wouldn’t make the ticket look any younger. There’s clearly no love lost between McCain and Romney. Besides, Romney isn’t particularly well-trusted (at least at this stage of his career) by either conservatives or independents—although conservatives do trust him more than McCain.

Each of these picks would rally conservatives to McCain’s side. They wouldn’t help much among independents—except maybe for Forbes—but they wouldn’t hurt much, either. On the flipside, they wouldn’t be as successful as Giuliani in instilling voters with particular confidence that the man waiting in the wings is ready for the job. But Huckabee wouldn’t inspire that confidence either—and that, combined with his lack of fiscal conservatism, would make him a worse choice.

Huckabee is folksy, well known, a good debater, and a likeable guy, and he has great support among Evangelicals. Nevertheless, very few non-Evangelical conservatives or independents want him in the White House. For that reason—as charming, engaging, and allegedly conservative as Huckabee is—McCain shouldn’t want him on the ticket.