From Nifong to Murtha, sacrificing others’ lives for political gain a hallmark of the Left 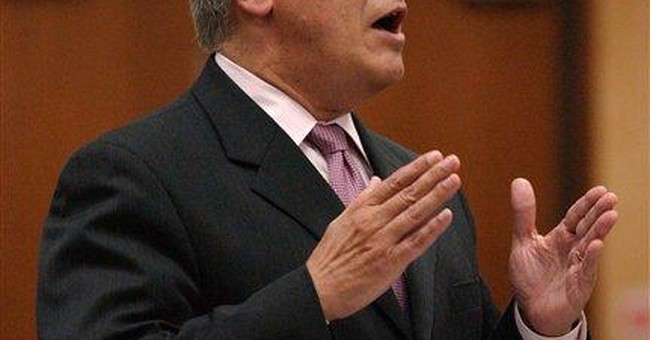 Since the issuance of indictments last April, the prosecution of three former Duke University lacrosse players (all young white males) for the alleged rape of a black female “dancer” has continued, despite continuously mounting evidence against their assumed guilt. Included in this potentially exculpatory data was DNA evidence (which was suppressed – an act for which Nifong has now given eleven separate explanations). Trusting his victim more than science, Nifong decided that all he needed to proceed with his case was the fact that, “in a photo line-up done April 4, the accuser identified [two of the accused] as her assailants “to a certainty of 100 percent,” and identified” the third to “a certainty of 90 percent”

Playing to the crowd in the racially-charged atmosphere which filled the scandalized community after the "victim" made her accusations, Nifong decided that he had more than enough evidence to proceed with the ruining of three young men's lives – despite the fact that it took all of a month for the rest of the American public to glom on to the fact that, due to her countless revisions to every aspect of her story about the night in question, the accuser either (a) had no idea what she was talking about, or (b) was a pathological liar.

Public statement after public statement followed, with Nifong having appeared in front of the media more than 70 times by the end of May (though as soon as the defense began to hit back, and negative PR – also known as "the facts becoming public" – began to taint the case, the DA began publicly considering issuing a gag order. This idea was backed by the NAACP, which was suddenly worried that "media coverage of the alleged rape [would] deprive the alleged victim of her legal rights to a fair trial." How typical of liberals – as similarly expressed in proposals like the Fairness Doctrine for talk radio, the modus operandi is, of course, to call for silencing of one or both sides once the PR machine begins broadcasting a message not 100% in tune with the "party line.")

Now, almost a full year into the case, we learn from Nifong himself the very good reason why he continued the rape prosecution of these young men, destroying their reputations and threatening to deny their freedom with years in jail. That reason, which was disclosed in a letter on the case from Nifong which was "included in a voluminous filing [February 28] to the State Bar," was this:

The lacrosse case arose "during the last few weeks of a hotly-contested Democratic Party primary in which I was seeking to retain my office,"

[Nifong] said. "I was not always able to give the case my full attention."

Well, that clears everything right up. I mean, had it been something trivial, well, then it would have been worth getting upset about the fact that three young men's lives were ruined by his wrongful, unethical, and potentially criminal prosecution. But hey, this was about politics– and that's clearly more important than the lives and freedoms of others!

Leave aside, for a moment, the fact that this case which did not merit Nifong’s "full attention" somehow warranted seventy public statements within a month of the indictments (as well as the fact that it sure as heck had the "full attention" of the young men who were facing a total loss of freedom for a crime they did not commit), and digest this: The mere fact that he was embroiled in the aforementioned "hotly-contested Democratic Party primary" in the first place shows how insignificant the concept of "honesty" was to Nifong. In an appearance last week on the Charlie Rose show, North Carolina Governor Mike Easley had this to say about his appointment of Nifong for the DA position (which opened up due to the previous officeholder's appointment as a judge):

…I wanted someone who wasn’t going to run, that was a long-term prosecutor, just to hold the office together until somebody was elected. And our staff interviewed him. He said he wasn’t going to run, and we didn’t think he would. And then he got out and started running. There's a totally different standard you set for somebody who is going to be the elected district attorney and get into politics, and then there's somebody who you want just to run the office. Because when you get out there and start making political comments, it requires a whole lot of different talent, a whole lot of different skills that obviously he didn't have. And he would not have been appointed had we known he was going to run...

Honesty, of course, all too often takes a backseat to ambition and to political maneuvering. However, there is something far more sinister – and far more alarming – about the mindset that allows political and personal gain to be sought at the knowing expense of others' lives. This prosecution destroyed the reputation of all three of these young men. Furthermore, they could have lost their freedom for a significant period of time, being confined to prison for years for crimes they did not commit. That mattered none to the Democrat district attorney, though, who saw an opportunity to score political points in a race-conscious community by putting away three white males for the rape of a black female – even after it became obvious, through both testimony and evidence, that no such incident occurred.

Sacrificing others' lives for personal political gain, though most often publicly attributed – incorrectly – to so-called "chickenhawks" in the nation’s (GOP) leadership, is actually a distinguishing characteristic of the modern Left.

Strong shades of the mindset which allowed a prosecutor to ruin young men he knew to be innocent, for the purpose of his own gain, can be clearly seen in other areas of power and of politics. One such area is in the Congressional Iraq debate, where elected Democrats have sought to condemn and to subvert America's efforts there, despite the fact that their political posturing, their efforts to undermine the President's leadership of the war, and their attempts to hamstring the administration's (and the military leadership's) options in a war that requires flexibility, has cost American (and Iraqi) lives.

These attempts to score political victories have cost real lives of real people – people who, due to the enlarged, overly ambitious egos of American politicians (and due to acts carried out for the simple reason of a hatred of the President), will never again return home to their families, will never live out their lives, and will never again have an opportunity to pursue their hopes and dreams like the rest of us at home will. Our troops voluntarily put themselves in harm's way, and they do so because of a higher ideal which they believe is worth the price not only of their time and their comfort, but of their lives.

The lives of others are simply details in the game that is politics and power to such people. Scoring political points at the expense of these people’s lives – or of any people's lives – is neither honorable nor acceptable, and those who do such, where applicable (such as in the case of Mr. Nifong), should be punished to the fullest extent possible. Those who have a (perhaps unfortunately) protected right to bluster, to bloviate, and to undermine – such as those in Congress – must either be made to see the effect of their inhuman callousness, and to realize that this is not a game – that their acts have an impact on the lives of others (though they unfortunately cannot be made to care about it) – or they must be shoved to the side and drowned out by the majority of this nation which is unified at least in its desire for the civilized treatment of their fellow human beings (let alone, in this case, in their desire for victory and for the ending of bloodshed in a way which not only spares lives in the present, but which will leave the best conditions possible for the preventing of bloodshed in the future, as well – both around the world and at home).

People who wield such power that they have a legal say in others' freedom – let alone in others' lives and deaths – have an indescribably immense responsibility to exercise infinitely more wisdom, judgment, conscience, patience, reason, and moderation in the exercising of that power than the normal man. People like Mike Nifong, Harry Reid, John Kerry, Nancy Pelosi, John Murtha, and their ilk hold that power over others, but have demonstrably a total lack of (and lack of interest in) those necessary qualities and requirements when exercising it – and that may be the greatest transgression that a person entrusted with power over others can commit.