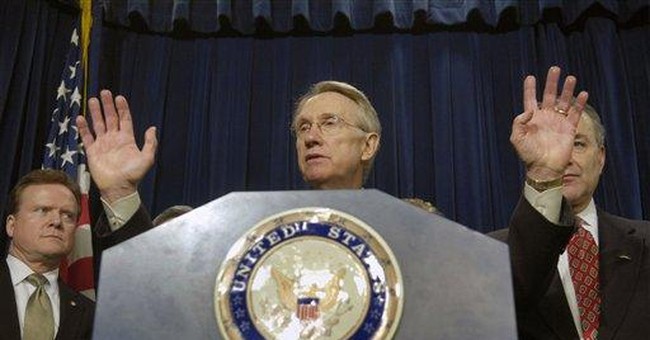 Last week’s Congressional debates – and votes – on nonbinding resolutions condemning a key component of President Bush’s “new way forward” in Iraq sent a dangerous message to America’s soldiers and her enemies about the will of America’s government to prosecute the war on terror.

Under new Democratic leadership, the House and Senate have both been increasingly vocal about their desire to derail the US efforts in Iraq. Whether out of the desire to “save the lives of future American soldiers,” or simply out of the longing defeat and disgrace President Bush, attempts to hamstring current operations, and to prevent flexibility and adjustment in strategy going forward, have moved to front and center on Congressional Democrats’ agendae.

This process began with the introduction, first in the Senate and then in the House, of non-binding resolutions condemning the President’s troop surge. The House version passed, 246-182. Seventeen Republicans voted with the majority; two Democrats, including Rep. Jim Marshall of Georgia, broke ranks with their leadership and voted against this damaging legislation. In the Senate, the resolution fell four votes short of the 60 required for cloture. Seven Republicans voted for the legislation condemning the President’s planned troop “surge,” and, unlike in the House, no Democrats broke ranks to vote against. Despite the legislative defeat, Senate Majority Leader Harry Reid (D-NV) claimed a “symbolic victory in the fight over the Iraq War.”

The fact that these resolutions are non-binding has caused many supporters to argue that there is no harm being done, either to the war effort or to troop, and say that these resolutions simply serve to send a message to the President that Congress disapproves of his handling of the war, and will be watching him closely from here on out.

They are correct on one count: the resolutions do, in fact, send a message – but it’s not to the White House. The only people a non-binding resolution sends a message to are our troops and our enemies, letting the former know that the vital backing from their homeland — both in will and in finances — is on life-support, and telling the latter that the American front in this war is so fractured that our determination to keep fighting could evaporate at any time, leading not only to the sacrifice of our troops in-theater, but also to an even greater emboldening of this enemy. Said Secretary of Defense Robert Gates, “It's pretty clear that a resolution that in effect says that the general going out to take command of the arena shouldn't have the resources he thinks he needs to be successful certainly emboldens the enemy and our adversaries.” Neither our troops nor our enemies are ignorant fools – they both hear and understand the messages being sent by Congress.

Furthermore, Rep. John Murtha (D-PA), former Marine, longtime antagonist of the soldiers and of America’s efforts in Iraq, and chairman of the defense subcommittee of the purse string-holding House Appropriations Committee, last week announced that House Democratic leaders had joined forces with several anti-war organizations in an attempt to undermine the President’s authority as Commander in Chief of the nation’s fighting forces by “limiting the administration’s options” through the passage of legislation, the inclusion of several stipulations for receipt of funding in appropriations bills, and a corresponding multi-million dollar anti-war advertising campaign. Murtha himself called this plan a “slow-bleed strategy” – an apt title, given the nature of what is being fought over in this political battle.

The controversial troop “surge addressed by the non-binding resolutions is only one of four fundamental adjustments being proposed by President Bush as part of his effort to right the ship in Iraq.

Second – and perhaps most important – the rules of engagement in Iraq were adjusted to provide for more effective targeting of insurgents and insurgent leaders (as well as forces from Iran). With this alteration in strategy, the troops on the ground can concentrate once again on rooting out and arresting or killing terrorists and insurgents, instead of having to restrict their operations, out of fear of upsetting the fragile Iraqi governing coalition, to driving back and forth on the same IED-infested roads and performing the same “show of force” or security missions, day-in and day-out, with little to show for it except for more dead or wounded troops.

Third, more pressure is being put on the Iraqi government to crack down on sectarian violence and on insurgent leaders like Muqtada al-Sadr, and to work harder and more quickly toward self-sufficience, both in governance and in security.

Fourth, in order to support the other three elements of his “new way forward in Iraq,” the President announced that a “surge” of 20,000 more troops would be sent to the Iraqi theater, both to secure Baghdad and to facilitate the implementation of LG Petraeus’s counterinsurgency, defense training, and stabilization plan.

Immediately attacked as an “escalation of the war in Iraq,” the troop surge became a hot-button issue from the moment that it was announced, and, since the advent of the 110th Congress, the situation – with regard to the surge and to the prospects for success in Iraq with what we have there already – has worsened considerably.

Caught in the middle of the posturing, the politics, and the debate are America’s soldiers. Those who voluntarily put their lives on the line in some of the most dangerous places in the world, and who all too frequently make the ultimate sacrifice for their fellow man or for their mission, are being sent the most dangerous of messages by these actions.

Such a messages is the epitome of disastrousness, not only for what it says to those who willingly give their lives to save ours or to serve a higher ideal, but also for what it says to our enemies. Those who strive day in and day out to kill us hear the same statements that our citizens and our soldiers do – that this war effort will be “slowly bled” to death, and that our already splintered political leadership is wavering on the edge of a total withdrawal from the region. Anyone who does not think that such a message emboldens the enemy – who will naturally think that an increased effort, and more dead Americans, will only hasten the surrender of the power which Osama bin Laden called a “paper tiger” with no stomach for a long fight – is not living in a reality-based world.

The message which the out-of-touch politicians in Washington most need to receive is that every bit of political posturing, every effort to undermine the President’s leadership of the war, every attempt to hamstring the administration’s (and the military leadership’s) options in a war that requires flexibility, costs American (and Iraqi) lives. Scoring political points at the expense of these peoples’ lives is neither honorable nor acceptable, and anybody who does not think that our soldiers do not correctly see these actions as being exactly that belongs firmly in the John Kerry camp of troop intelligence denial.

If our political leaders lack the stomach to do what is necessary to successfully complete a war against those who wish to destabilize a region and to kill us all, then they should follow that conviction to its only possible “honorable” end, and force a withdrawal of all troops, as soon as possible, through binding legislation. Anything else not only shows the cowardice of not fighting for what they really believe, but sends the loud and clear message that there is no real support for our troops or for their mission on the home front – a message which tells our soldiers that their lives don’t matter for anything but to serve as pawns in a political game, and which tells our enemies that they have an ally in power in this country.