Mourning the loss of a conservative champion 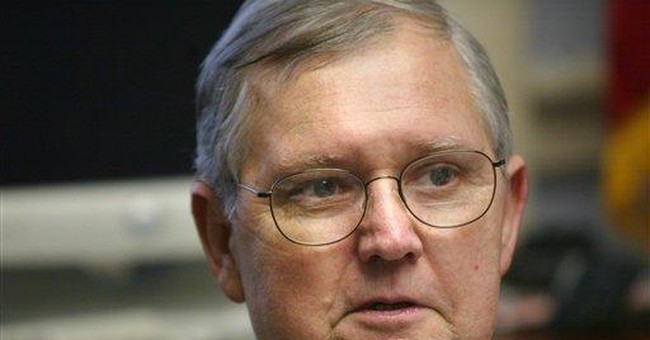 Charlie Norwood, six-term GOP Representative from Georgia’s 10th Congressional District, passed away at his Augusta, GA home this Tuesday. The ailing Congressman’s death came only days after he declined further medical treatment in Washington for non-small-cell lung cancer, and returned home to hospice care, and to be with his family in the last days of his life.

Norwood had also battled idiopathic pulmonary fibrosis (IPF) for years, being diagnosed with the condition in 1998 and receiving a lung transplant in 2004 as treatment.

A member of the 1994 “Republican Revolution,” the sixty-five year old Congressman worked tirelessly on several issues of importance both to his state and to the nation. An Army veteran himself, with two Bronze Stars earned in Vietnam, he spearheaded the effort to secure full medical coverage for military retirees, co-authoring the Keep Our Promises to Military Retirees Act. He also worked with the Governor of Georgia on a plan to preserve federal funding in support of Georgia’s State Children’s Health Insurance Plan (SCHIP), also known as “Peach Care,” and fought for other comprehensive healthcare reform measures.

Norwood did his part to represent Americans across the political and economic spectrum. He championed the needs of individuals, such as special needs students, for whom he authored the Discipline Reform Amendment to the Individuals with Disabilities Education Act, and he also worked to improve industries, like broadcast television, for which he authored Community Broadcasting Protection Act.

Norwood’s congressional legacy was set up to live on in the 110th Congress with the reintroduction Monday of his signature legislation, the “Patient’s Bill of Rights.” Known as the “Consensus Managed Care Improvement Act of 2007” and co-sponsored by Democrat David Dingell of Michigan, this legislation, if passed, would reinstate the rights of medical patients to sue federally-governed health plans in state court for injury or death-causing medical decisions and improper denials of care – an ability lost to the public with the 1974 passage of the Employee Retirement Income Security Act (ERISA).Shortly before his death, Norwood wrote that, given the leadership positions of several Democrats who had in the past supported the Patient’s Bill of Rights, there was “no reason” that the 110th Congress couldn’t “pass the original, un-compromised bill with a veto-proof majority.”

“At the last poll,” he concluded, “the Patient’s Bill of Rights had an 82% public approval rating. If the Democrats can use their new majority to pull that off, they will and should score big with the public.”

Norwood was a rock-solid conservative on many issues, from taxation (he was a “FairTax,” or national income tax, supporter) to immigration. The author of a provision in the 2005 Deficit Reduction Act which required that Medicaid recipients verify US citizenship, he also supported a security fence along the US’s southern border, supported fines on businesses which employed illegal aliens, and opposed any form of amnesty for undocumented immigrants. He was staunchly pro-life, and supported school vouchers as a means of “returning decision-making to families” – something at the heart of the core conservative pro-choice and pro-personal-responsibility philosophy.

Though his views on many of these issues put him in direct opposition to most core Democrat issues and principles, the overall sentiment toward the late Congressman has largely been both warm and respectful from both sides of the aisle. Both Republican and Democratic commenters on Georgia political blog “Peach Pundit” have attested to the fact that, regardless of political affiliation, there was never any doubt that Dr. Norwood “put the interests of his constituents, his state, and his country first,” and professed admiration for a “good and honorable man who dedicated his life to public service and to serving his constituents to the best of his ability.”

Norwood’s popularity in his congressional district was inarguable. Despite redistricting in 1996 and 2002, he never received less than 52.3% of the vote (in 1996), and received over 60% of the vote five times, including twice over seventy percent. His reelection in 2006, unfortunately was his last.

With Norwood’s passing, Governor Perdue will be required, by the end of next week, to submit to Secretary of State Karen Handel a proposed date, at least thirty days away, for a special election. There are countless names being mentioned as potential candidates for that seat, although all but one have been smart enough not to announce their candidacy yet, instead opting to wait out of respect for Dr. Norwood and his family.

The show, as they say, will go on in the 10th Congressional District, and in the US House of Representatives. However, it will be a bit less warm and a bit less colorful for the loss of this great man. Conservatives this week lost an icon and a champion of their cause and their values; more importantly, though, the Norwoods lost a beloved family member, and many, many more around Georgia and around the country lost a dear, dear friend.

Rest in Peace, Congressman. For those who knew you, it was an honor; for those who didn’t, it was an opportunity missed to know a great man; and for those whose lives you touched through your endless dedication to public service – which was all of us, regardless of ideology or affiliation – it was an experience for which we wouldn’t trade anything in the world.