A reminder from Al Qaeda that Iraq still matters. 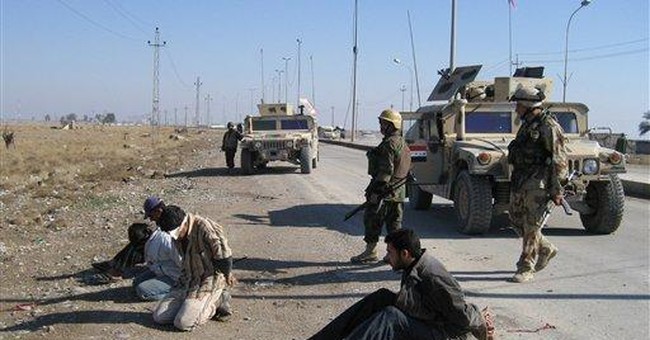 Is success in Iraq "vital to America’s national security," as President Bush so often says? Fewer and fewer Americans think so, as the declining support for our activities there clearly shows. A major reason for this is the fact that the ongoing struggle in Iraq has become divorced from the larger War on Terror in the minds of many Americans.

However, the problem is larger than just Iraq. As time goes by, the terrorist attacks of 9/11 become but an ever more distant, unfortunate memory to too many Americans; and that, combined with the fact that the country has not been struck by terrorists since that day (regardless of the Council on American-Islamic Relations' apparent mistaking of the Fox television show "24" for reality), has resulted in the issue of national security as a whole – and the corresponding War on Terror – no longer resonating with the American people in the way that it did only a few short years ago.

Add to that the fact that the only "news" coming in from Iraq consists of doom-and-gloom reports of more attacks on civilians and of more dead US troops, reiteration of the meme that "there were no WMD or terrorists" there, and more use of the words "quagmire" and "Vietnam," and the result is a conflict which has been completely divorced, in the American mind, from the War on Terror – and, thus, has become overwhelmingly unpopular amongst the general population.

However, information has recently come to light regarding plans established by Al Qaeda in Iraq (AQI) which, if fully and properly presented to the American people, could go a long way toward helping reverse the disconnect among the populace between Iraq, the War on Terror, and our nation’s security.

In a recent appearance before Congress, Defense Intelligence Agency chief Lt. Gen. Michael Maples confirmed that documents confiscated in a raid on an AQI safe house “revealed that Al Qaeda in Iraq was planning terrorist operations in the U.S.” Given the timing – roughly six months ago – and the relative secrecy regarding the capture of these documents, it is not a stretch to suppose that they were among the computer files and other intelligence items recovered from the remnants of the building which had been used as a hideout and meeting place by terrorist leader Abu-Musab al Zarqawi until his death there at the hands of US forces on June 8.

Called "the first hard evidence al Qaeda in Iraq was trying to attack us here at home” by former counterterrorism czar Richard Clarke, this plot demonstrates that AQI’s leader took his marching orders from Ayman al-Zawahiri – known as Osama bin Laden’s "right-hand man" – with frightening seriousness. In a 6,000-word memo sent shortly after the 2005 subway bombings in London, in which Zawahiri laid out the plan for a post-Iraq Islamist state (and the goal of using it to topple the regimes around it en route to destroying Israel), Zarqawi had been instructed to, among other things, use his forces to “attempt an attack inside the United States."

According to an ABC News report, the plot outlined in the captured documents involved repeating the tactic used by the 9/11 hijackers to infiltrate the US, using student visas to secure entry for ten to twenty AQI members. Fortunately, the monitoring of those in the country on student visas has been stepped up since 9/11, as seen last August – right around the time that the liquid-bomb plot was being foiled in Britain – when the disappearance of eleven Egyptian students who enrolled in a program at Montana State University (but never showed) up led to a nationwide manhunt.

All eleven students were eventually located – in locations ranging from Virginia to Minnesota – thanks in large parts to the efforts of the bureau of Immigration and Customs Enforcement’s Identity and Benefits Fraud Unit (IBF). The agency responsible for cracking down on immigration fraud, the IBF opened nearly 4,000 new cases in 2006 alone (this being the most high-profile), and, if the case of the Montana State students is any indication, does its job very effectively. However, as ABC pointed out, “some security analysts fear that skilled terrorists – handpicked because of their clean records and because they are carefully trained – could still slip through an academic setting.”

Beyond reinforcing concern about terrorists who try to come here by abusing legal means of entry, this revelation of a plot by Al Qaeda in Iraq against America not in the middle east but on US soil should serve as a wake-up call to Americans who have become complacent about the constant threat this nation faces, and who have written off the conflict in Iraq war as a pointless "mistake" which we need to remedy through hasty withdrawal. If anything, this new knowledge regarding the intentions of AQI – both in the middle east and here – should reinforce the idea, often repeated by President Bush, that we are "fighting terrorists in Iraq so that we don’t have to fight them here."

Though the President chose not to use his State of the Union address to speak about this specific plot against the American homeland by terrorists in Iraq – a missed opportunity in his attempt to further make the case for our activity in Iraq – he should address it in the very near future. Likewise, the administration should publicize other, similar cases (within the bounds of operational security), as part of the reason for Americans’ complacency about terrorism is the fact that foiled plots such as this one, which target the American homeland, are rarely – if ever – made public.

The President has often said that "the consequences of failure [in Iraq] would be grievous and far reaching." For too many Americans, these are simply words – just as the fighting and slaughter there are simply segments on the nightly news. That the insurgents in Iraq seek – as the Zawahiri memo instructed – to overthrow order and reason in the region, and to establish a radical Islamist state from which to launch terrorist attacks on the Western world, is also a concept not entirely real in the minds of too many people. With this latest news, though, the situation in Iraq – and the threat to the American homeland – becomes much more real. The terrorists we are fighting in Iraq not only seek to kill our troops who are there, but to kill civilians on our own soil – and a precipitous withdrawal from the region would only embolden those bloodthirsty killers to follow us home. The testimony recently given by General Maples on Capitol Hill bears this out and, while we must do all that we can to defeat the terrorists in Iraq and elsewhere, plots of this type which we do learn about need to be made public as early and as often as possible, lest the disconnect between Iraq, the War on Terror, and the security of our homeland grow even larger in the American psyche than it has already become.