Black leaders slow to warm up to Obama 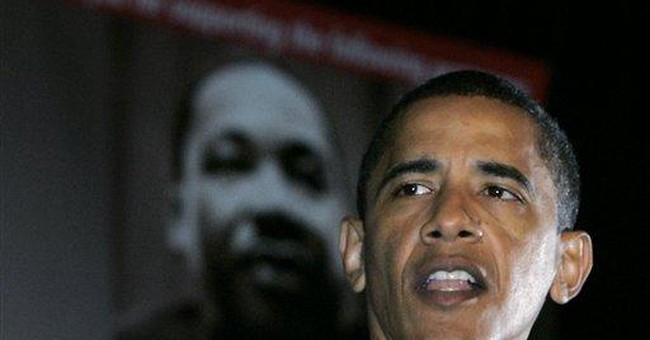 Barack Hussein Obama may be the media’s anointed “chosen one” in the 2008 race for the presidency (for now, at least). However, the “Leaders of Black America” appear to be tightly guarding their own lamp oil, and to be watching Obama with more than a bit of apprehension.

As he London Times recently reported, “Civil rights leaders who have dominated black politics for much of the past two decades have pointedly failed to embrace the 45-year-old Illinois senator who is considering a bid to become America’s first black president.”

The story quotes the Rev. Jesse Jackson as saying, “Our focus right now is not on who's running, because there are a number of allies running.”

Former Calypso singer Harry Belafonte, recently in the news for attacking President Bush and providing ringing endorsements of Venezuelan dictator Hugo Chavez, chimed in with the warning that America needs “to be careful about Obama,” because “we don’t know what he’s truly about.”

Other than lamenting the “media razzle-dazzle” and lack of “meat” regarding Obama’s views on important issues, the Rev. Al Sharpton has declined comment on Obama, citing a possible presidential run of his own (again).

The reason for the chilly reception? One self-proclaimed “independent” Democrat strategist ventured this guess: “They are basically jealous. They’ve been toiling in the trenches for decades, and along comes this son of a Kenyan farmer and suddenly he’s measuring the drapes in the Oval Office.”

While Obama has managed to maintain the appearance of being a centrist Democrat due in large part to his ability, for all intents and purposes, to “cherry-pick” those issues on which he will go on record with his opinion, a presidential campaign would seriously hinder that – especially, as one Democratic analyst was reported as saying, if there were a Sharpton candidacy to contend with in the primaries, since it would “put Obama on the spot by forcing him to address awkward civil rights issues such as police brutality and racial profiling that he tends to steer clear of.”

Some have called a primary contest with Sharpton “just what the doctor ordered to keep Obama on the straight and narrow”; others, though, have suggested that his candidacy would work to the advantage of Hillary Clinton, as it could split the black vote in the primary.

In a recent interview, the flamboyant civil rights leader warned that Obama could not “take the black vote for granted.” However, as a Democratic strategist pointed out in response, Obama could benefit from the comparison to Sharpton, emerging as a “model of reason.”

Each of these arguments, of course, has the potential to be correct.

Given the past records of Sharpton, Jackson, Belafonte, and others, the idea that Obama is, at least partially, begrudged the glowing media attention being lavished upon him is certainly not out of the question. However, one has to wonder whether the reason behind the apprehension may have more to do with a desire to withhold approval until Obama’s public persona moves farther to the left, and more in line with the black liberal Democrat standard (or at least the private assurance that he will do so once he has won over the American electorate with his moderate facade).

A serious worry for those who anoint the leaders of the African-American movement, of course, is that Obama may stray from those beliefs and policies – an act which would likely earn him the enmity of America’s black leadership, and result in his being branded with the dread misnomer “Uncle Tom” (which has been described by “Black Agenda Report” magazine as being a “Black individual or group” who has “betrayed… the best interests of Black folk”), or the even more hateful epithet of “Oreo.”

Unfortunately, a precedent has been set regarding the meting-out of this penalty on those who have questioned the norms of African-American political thought. Maryland Lt. Governor and 2006 Senate candidate Michael Steele had Oreo cookies thrown at him while on the campaign trail.

Former National Security Adviser, and current Secretary of State, Condoleezza Rice was referred to as an “Aunt Jemima” and a “white man’s lackey” by a liberal Wisconsin radio host (on “Progressive Talk 1690AM”), and was branded a “House Slave” by the African-American magazine Suede.

Harry Belafonte also called Colin Powell a “house slave” and a “race sellout” due to his support for some of the President’s policies, and DailyKos, the crown prince of liberal web sites – and one which often receives guest postings from Democratic members of Congress – referred to the former Secretary of State in 2004 as an “Uncle Tom” who was “stumping for Massa Bush” for his activity on the presidential campaign trail.

DailyKos also referred to Ohio gubernatorial candidate Ken Blackwell and his supporters as “Uncle Tom's Cabin Republicans,” solely because of their party affiliation, and a writer at liberal weblog Democratic Underground referred to him as “Uncle Tom Blackwell, the other white meat,” promising “to smear him in the African American [sic] community,” and expressing the hope that “Ohio dems [sic] officials see it like I do.”

Barack Obama will have to choose his path sooner rather than later. As he will soon discover, the path of least resistance within his own party is clear: remain on the reservation, and receive unbending support – regardless of how out-of-bounds you may go. An example of the forgiveness available to those who stay in line is Rep. William Jefferson (D-LA), who was given a standing ovation by the Congressional Black Caucus upon his re-elective return to Washington, despite his being caught accepting bribes and hiding cash.

On the other hand, the tougher path involves much more risk, and very little reward from the left side of the aisle, or from today’s civil rights leaders. This path requires original thought, the willingness to question separatist politics, and the courage to march to a different beat than those who set the standard for “acceptable” black leaders.

At least one Democratic candidate is doubtless hoping that Barack Obama, the media’s current darling, opts for the latter option, and thus becomes unpalatable to the kingmakers of the African-American political movement. Should this unlikely development occur, Hillary Clinton, wife of the “First Black President,” will no doubt be waiting in the wings to scoop up America’s black vote.