Drought and Milk And Cheese and Meat

In the past few days, the news has been filled with stories about how food prices are going to skyrocket. Estimates range from 5-6% higher. When the news media gets a hold of a story, I tend to be cynical. I don’t think you will see 5-6% higher food prices because of the drought.

Food processing companies are incredibly efficient. The efficiency they drive in their manufacturing process is essential to their business precisely because the inputs to production are volatile in price. Commodities like corn and meat have always been volatile. That’s why futures markets ($CME, $ICE) have existed in the US since 1849. There is a place for everyone to hedge that volatility.

My guess is through hedging and production efficiency, food prices won’t increase by 5-6%. But, the market bears watching from here. With regard to cattle, Nebraska may replace Texas as the leader in placing cattle ($LE_F).

Corn ($ZC_F) isn’t in desperation mode yet, although it could get there.

Welch said if corn yields level off at 130 bushels per acre, he doesn’t expect carryover stocks to be any less than they are currently projected for the crop year just ending.

“We are not in crisis mode yet,” he said. “That’s the role of high prices, to provide incentives for producers to produce more and users to use less.”

Farming is a continuous game, and next year farmers should plant more acreage to take advantage of lower stocks and higher prices. Unlike 2008, fund buying and speculation is down. There just is simply less money from banks being put out for risk.

If you recall, last year at this time everyone was fretting about the price of cotton. I have noticed that clothes are more expensive this year. But, the cotton price has dropped so I suspect next season’s clothing will be cheaper. 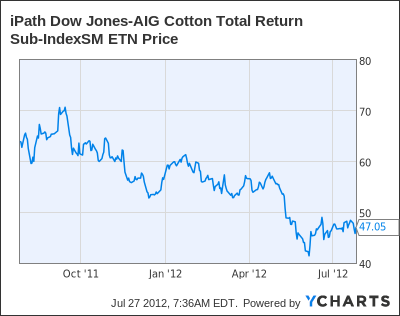 Food prices could increase dramatically next year. But, the cause of higher prices might be because of the Federal Reserve weakening the dollar by quantitative ease, not the summer drought and heat of 2012. Although the heat this summer will become a convenient whipping boy for policy makers.

For All of His TV Appearances, National Security Advisor Jake Sullivan Reassures Nobody on China
Rebecca Downs
Study Finds Republicans Fare Better Than Democrats on Citizenship Test, But Most Eligible Voters Fail
Rebecca Downs
The Biden Administration Has a Transgender Agenda