The Difference Between GM and Ford

Warren Buffett bought ten million shares of GM($GM). Interesting. GM and Ford ($F) are very different companies. Neither stock has performed particularly well over the past year. Buffett would never buy Ford simply because there are two classes of stock. The Ford family still has ultimate control over the company. When Buffett augers in, he wants some modicum of control. I can’t say that I blame him.

The corporate cultures of the two companies are very different. One example. GM pulled its ads from Facebook. Ford is doing more with Facebook. Another, GM bailed out by the government, Ford weathered the storm.

The social media strategy of each company is extremely interesting. GM is going to go the traditional route. Ford has embraced the tools of social media to connect with its customers. I think that gives Ford a competitive edge. 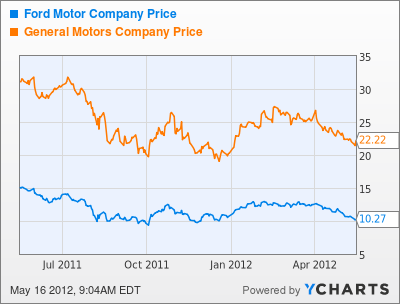 Allan Schoenberg gave a great speech at the University of Chicago Booth Marketing roundtable on social media. He spoke about how corporations should be using it to their advantage. If you read the book Groundswell, there are ten case studies in how to use the different platforms to benefit your business. Allen cited Ford as the number one corporation using social media today. They use it to benefit the brand, the company and their customers.

Ford understands the new world, GM doesn’t. But that’s not surprising given the different cultures. My prediction is GM is going to try and dictate where it wants the customer to go, Ford will listen to its customers and build cars to suit their demands.

No one is an expert on social media. It’s simply too new to be an expert. Things are changing rapidly. Who saw Pinterest three years ago? Instagram? Some people and companies are more adept than others at utilizing it. Here are the two feeds from GM and Ford on Twitter, notice a difference? I do. One person even tweeted this:

GM’s feed looks like a complaint department. Then they even tweeted this.

@idtuner Unfortunately we do not discuss future product here, nor do we have any info to share on this at the moment. cc @GMCanada ^MS

I can understand not wanting to give away a secret. But, I would have engaged this customer differently. Instead, GM shut them down. I am sure Ford will be happy to engage them.

On Facebook, Ford has 1.5 million fans. GM, 378k. Ford is using Facebook as an effective tool to not only communicate, but to listen to their customers. No wonder their Facebook ad campaign is much more successful than GM’s.

Social media is not the be all end all that will determine success or failure. But it offers a clue into the culture of the company and how they view the world. Big monolithic corporations can dominate simply because they are big. However, to truly excel and protect themselves from upstart competitors, correct use of social media can be a big part of instilling a more customer focused culture in the company.