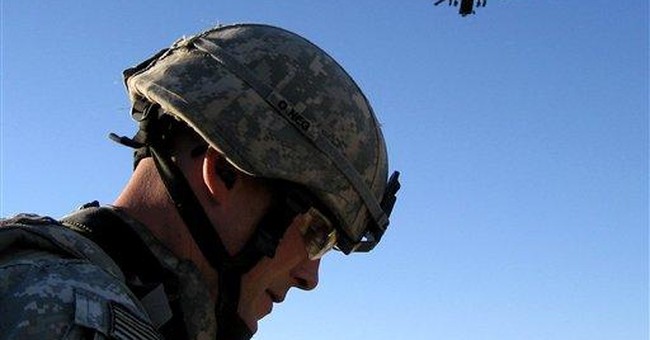 I went to Iraq prepared to die. A former soldier called out of the Individual Ready Reserve (IRR), I was a supporter of the war and ready and willing to do my part. I got into decent physical shape, signed my medical waivers, and volunteered for the job of training Iraqi Troops and taking them into combat. I had no illusions as to the potential price I, or my wife and 2-year-old daughter might have to pay. I made my burial wishes known and wrote about 50 letters to my daughter, dated and spaced to guide her through the challenges which I knew would come in life. I made peace with the plausibility of my death, content in my knowledge that our mission was critical for the ultimate stability of the world and the best course available for American security.

When my daughter was 26, she would finally receive the letter explaining my attitudes towards the war and how I felt about my death. This is the phrase which I believe best captured it:

"In order to secure the American people, democracy had to be spread to the region because democratic governments are far less prone to going to war and they are far less prone to internal strife and violence. The process couldn't help but be messy, but it was necessary. Obviously, I don't know how this experiment works out, but you do. If Iraq is a democratic nation now, or if Iran, Syria, Lebanon, Saudi, Kuwait, or one of the others has become democratic, then the war was worth it. However, if we pulled out because we lost too many soldiers and got out in an act of political expediency, then I did die in vain."

Two years have passed since I wrote this. I came back from Iraq over a year ago. When I lie in bed at night, I think about my experiences there and the men I knew who didn't come back. I think about how our government executed the mission and the serious mistakes of the occupation planning. I watch the cynicism of the "elder statesmen" who are willing to allow our young men who have already died, die in vain and willing to sacrifice more young men in order to achieve a politically palatable surrender--which will neither accomplish our mission, nor earn the respect of our foes. I watch as a segment of our society grabs hold of every setback and is almost gleeful at the chaos. They seem to enjoy seeing the president humiliated. And I grow more frustrated every day.

I am frustrated because I know going into Iraq was the correct strategic decision. But for some reason, our administration decided to do the occupation in an utterly incompetent manner. If we had just kept the Iraqi Army and police intact, been willing to put in 200,000 more troops for the duration of the occupation, and made sure every unemployed Iraqi man had a job, we could have cut off the insurgency before it even started. We would have made that first step towards a democratic Middle East. We would have struck fear in the hearts of our enemies. We would have created a close ally in the country that occupies perhaps the most strategic piece of land in the world.

But we didn't. A suspension of reality and an unwillingness to engage our enemies in total war instead created an environment where the skeptics have an opening to declare their victory by our defeat. Meanwhile our president is either unwilling and unable both to articulate the stakes in the conflict and give the American people reason to continue to make the investment.

Almost four years into the war, the comparisons to Vietnam have finally become at least somewhat relevant. We are engaged in a war with a strategic importance the administration either can't or won't articulate. While we overwhelmingly defeat the enemy when our forces meet on the battlefield, we are unwilling to demonstrate the patience required to wage a counter insurgency. Our forces are slow to give responsibility back to host nation troops. Most importantly, our country again fails to demonstrate a level of will commensurate to that of our enemies'.

On my desk there is a form I need to return to the army. They want to know what I plan to do. My choices are: stay in the IRR; join a reserve unit; or resign my commission.

By any measure of logic I should resign my commission, but I can't quite bring myself to do it. I still believe in the war. And I feel if my country needs me again, I should be willing and available to return. Indeed, I would gladly return, for as long as the war took-- if I knew my country and its leadership had a commitment to the cause matching my own.