Obama Zombies Must Be Challenged Aggressively 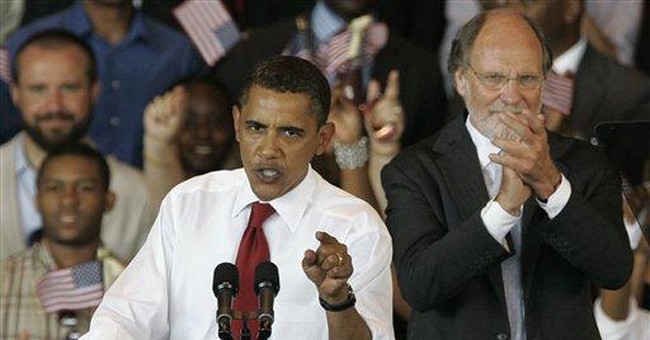 Obama just shellacked conservatives, and yet what do I hear from many of my conservative friends? The same impish, wimpy, sniveling “there’s nothing we can do” weak response that got us this socialist chicanery in the first place. Enough. If conservatives aren’t on offense, we’re on defense.

It is time to ensure that Obama’s health care “victory” is a Pyrrhic one. That means we need to get up in the faces of all the Obama Zombies—lobotomized Leftist followers—and challenge every inch of this bill aggressively.

I, for one, started by serving up a heaping dose of grilled Grayson, as in Representative Alan Grayson (D-FL). Grayson, you will recall is the radical Obama Zombie that said Republicans’ health care plan consisted of telling citizens to “die quickly” and who equated Hitler’s annihilation of 9 million Jews during the Holocaust to Republicans’ insistence on a health care bill that didn’t break the national piggybank.

So I decided to track him down and make him defend his support for the House bill’s funding for therapeutic services for “Native American child molesters.”

You can watch Grayson’s compassionate, informed, intelligent response for yourself.

So voluminous and outrageous were the legislation’s contents, that its fiercest supporters, like Grayson, don’t even know what’s in it. But right there, inside H.R. 3962, on page 1,950 (yes, folks, there were really that many pages to this boondoggle), it reads that allocations will be made for: “perpetrators of child sexual abuse who are Indian or members of an Indian household.” (One wonders why Nancy Pelosi allowed such racist, insensitive language such as “Indians” instead of “Native Americans” to make it into the bill.)

Still, if the drive by media aren’t going to confront Democrat backers of this bill with the facts, conservatives must get up in their grills and ask the tough, fact-based questions. Unless we take the fight to them directly, the legions of Obama Zombies will continue to march forward and trample every freedom we hold dear.

I asked “Dear Leader Hoyer” how it was that he had the stones to tax Americans for not purchasing health care when tax cheat Rep. Charlie Rangel is writing tax legislation and tax cheat Treasury Secretary Tim Geitner is enforcing it. Instead of standing his ground like a man and defending his hypocrisy, “Steny” skedaddled, likely to go sit obediently in Nancy Pelosi’s lap to await her next commands on how to fleece you and your family.

There’s only one way conservatives will awaken the younger Obama Zombies who are most responsible for Obama’s presidency (remember: 66 percent of all voters under the age of 30 voted for the Anointed One). And here it is: we must slam educated elbows into the ribcages of all the Democrat dolts who wrought this nightmare upon us. We must stand athwart history yelling, “Hey, jackass! Get your government off my freedom!”

How? Simple. We walk up to Obama Zombies, ask them the questions that their lap dogs in the media won’t, and videotape it. Pure and simple.

Sunlight is the best disinfectant.

It’s time to get tough.

It’s time to take the gloves off.

It’s time to fearless in revealing the radicals for what they truly are.

If we’re not on offense, we’re on defense.

Jason Mattera is the author of the new book, Obama Zombies: How the Liberal Machine Brainwashed My Generation (Simon & Schuster).