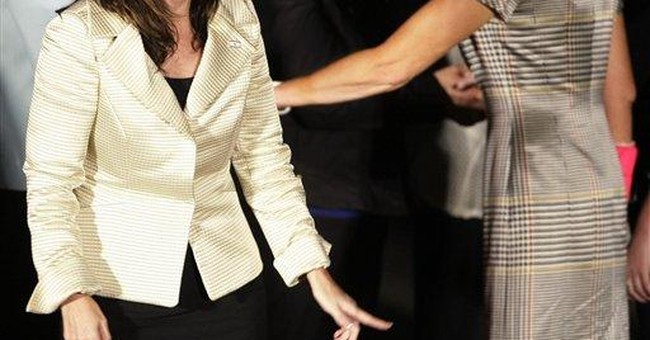 Senator John McCain’s selection of Alaska Governor Sarah Palin as the GOP vice-presidential candidate changes the election parameters rather dramatically. The announcement cancelled out the major uptick that Senator Barack Obama might have gained from his over-the-top convention spectacle that included a speaker’s platform complete with Greek columns, a fireworks display that lasted 40 minutes, and a flag-waving, emotional audience of 85,000 enthusiastic supporters. His masterfully-delivered convention address (though full of boilerplate liberal agenda) was completely overshadowed by the Palin announcement. Even worse for the leftist candidate, none of the poll results listed on RealClearPolitics.com has Obama ahead of McCain by more than five points, and the Republican convention is not yet underway. Even more important, the McCain campaign raked in $10 million in the three days since the vice-presidential announcement, and they credit Palin with the record-setting $47 million that came in during August.

Those who have discounted the evangelical vote and have claimed that the values voters are a spent force need to make note of the pocketbook and enthusiasm quotients that Palin brings to the ticket. McCain has fired up his base, reached out to swing voters in several different categories — including women and economic conservatives — and given western states an appealing candidate. Those who want a return to fiscal accountability, personal responsibility and an end to government corruption applaud the choice of Palin, who has taken on the special interest groups and went into politics because of the challenges she faced as president of the PTA at her kids’ school.

Even die-hard Democrats are worried that Senator Obama can’t seem to break free to take the lead in this election. The addition of Sarah Palin to the GOP ticket obviously worries the Obama campaign and the left-wing pundits. Almost immediately, liberal blogs launched a mudslinging campaign of lies and innuendo against Palin by accusing her 17-year-old daughter, Bristol, of being the mother rather than sister of Palin’s four-month-old son, Trig. The hateful rumors grew to the point that the Palins were forced to refute them by revealing private family information before they had planned to go public — their teenage daughter is five months pregnant and plans to marry the father of the child. With notable grace and unconditional love and support (rather than the harsh judgmental attitude that the left expected), Todd and Sarah Palin released a statement saying that even though the pregnancy “would make her grow up faster than we had ever planned,” they were proud of their daughter’s decision to have the child and to marry the father. They asked the media to respect their daughter’s privacy “as has always been the tradition of children of candidates.”

Of course, Laura and George W. have plenty of reason not to agree that the media gave respectful privacy to their twin daughters, whose exploits while in college were front page news.

To Senator Obama’s credit, he quickly and angrily disassociated his campaign from the rumors about Bristol Palin. He told reporters that he considered politicians’ families off-limits ¬¬¬¬— especially their children. He added that if anyone in his campaign was involved in spreading vicious rumors about Bristol Palin they would be fired. He said, “This shouldn’t be part of our politics. It has no relevance to Gov. Palin’s performance as a governor or potential performance as a vice president. So I would strongly urge people to back off these kinds of stories.”

Of course, the comprehensive sex education crowd wasted no time in blaming Sarah Palin’s advocacy of abstinence education for her daughter’s situation. Several pro-abortion advocates even lamented the fact that the mother’s stance “forced the daughter to go through with her pregnancy.” Other reactions to Sarah Palin from the left have been predictably vicious (though most leftists assume such knee-jerk reactions would come from the right). Amazingly, feminist Sally Quinn argued (apparently with a straight face) in the Washington Post that Sarah Palin ought to be a better mother and stay home with her daughter during this challenging time of her life and that she should also be home with her special-needs son. Alan Colmes (of Fox News’ Hannity and Colmes) seemed to be blaming Sarah for her son’s condition. CNN’s John Roberts explained that she could not care for her son while handling the responsibilities of vice president. Popular CNN anchor Campbell Brown heatedly argued that Bristol’s pregnancy disqualified her mother for the vice presidency. Numerous Democrats belittled the Palin selection — “desperate,” “phenomenally stupid,” breathtakingly risky,” “under-qualified babe,” “a Hail Mary play” — and downplayed her experience as a “small town” mayor and Alaska’s governor. Maureen Dowd dismissed Palin as a “two-year governor of an oversized igloo.”

The result of all these reactions is that this election is exposing some harsh discrepancies in leftwing stereotypes. Ironically, Cindy McCain was involved as a sounding board for her husband’s VP choice. John McCain spent an hour discussing the pros and cons of the choice with Cindy before meeting with his team for another hour as he came down to the wire in making the decision about his vice presidential partner. Michelle Obama, on the other hand, claims that she was not involved or even informed about her husband’s choice ahead of time. Feminists who have called for breaking the glass ceiling are dismissing Sarah Palin as a candidate chosen “only” because she is a woman.

In addition to changing the parameters of the 2008 election by how she lives out her policy positions and handles life’s curve balls, Palin might also change the dynamics of the women’s movement — by erasing some of the stereotypes and bringing clarity and truth to the feminists’ distortions of conservative evangelical women.