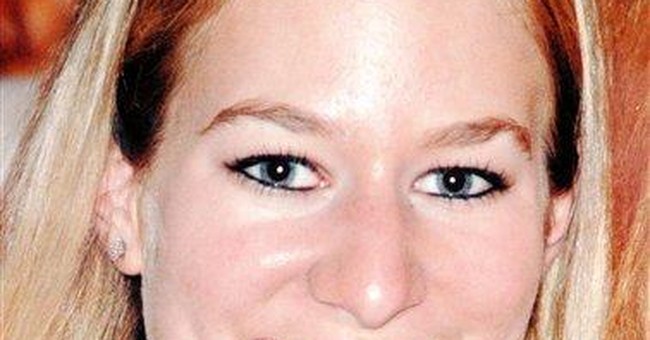 Police have found another young woman’s body. They think it’s Emily Sander, a missing college student in Kansas. The 18-year-old community college student apparently led a double life. She appears to be the young teenager who was also known as Zoey Zane, who posted nude photos online, appeared in two live cam shows a week and recently signed a contract for pornographic work on the Internet. She was last seen leaving a bar with a 24-year-old man whose room was later found in disarray and drenched in blood. A friend told reporters that Emily “enjoyed” posing for the pictures because “she wanted to be in the movies and she needed the extra money.”

There is an ugly thread linking Emily’s apparent death to Natalee Holloway’s disappearance while on her senior trip to Aruba and to the unimaginably gruesome death in New York City last year of Imette St. Guillen after she left a bar at 4 a.m. These sorts of tragedies bring us grief –– but our grief is mixed with rage that such a thing could happen to such beautiful young women with the potential of bright futures ahead of them.

Are young women not aware that there are sick, cruel, evil, perverted people in this world? Do they imagine that the mere threat of arrest or a lawsuit will protect them from these predators? Do they think that drunk or sick guys will respect a “no?” Where do they come up with the insane idea that they could “take care of themselves” in a struggle with a 250 pound brute or someone with a knife or gun or steel bar to force submission — someone who would, in addition, take pleasure in the pain inflicted by the attack.

Some young people seem to have a desperate need to live life “on the edge” — to chase excitement and engage in behavior that flouts death. When they are “liquored up” they make foolish decisions to drive too fast, to take foolish risks, to go where they wouldn’t otherwise venture, to associate with dangerous people — in short, to engage in perilous activities that could, and often do, end in disaster.

Those who push the idea that kids are miniature adults are not dealing with reality. No amount of teaching about supposedly safe sex will protect from misjudgments; utopian rhetoric will not counteract immaturity. Adults need to teach kids –– even older teens ––about reality and protect them from predators. There are people who live for the adrenaline rush. They are driven to do things that take them right to the edge. They want the thrill of the narrow escape, to seriously fear that they aren’t going to make it through. If or when they manage to survive, they want to tell about staring death or injury right in the eye and, with a lot of luck, coming through. They might fear being banged up a bit, but they think that they’ll live to tell the tale of having had an experience with the real possibility that they were going to die.

Such an attitude comes in degrees, of course. Bungee jumping or skiing a black diamond slope are mild forms of the phenomenon. But some individuals want to push the envelope and actually court disaster, hoping to have a grand tale to tell on the other side of the experience. This is all the more dangerous when kids have no sense at all of their mortality — guys especially, but obviously there are some girls who are that way as well. They deliberately take risks (probably telling themselves they’ll only do this once) to have the kind of experience that produces a fear-induced or guilt-induced rush of excitement.

Such teens think that if they haven’t done something wild and dangerous then they haven’t really lived or that they don’t measure up unless they have an escapade that matches or exceeds the exploits of their parents or some hero. Guys, especially, see it as a test of their manhood.

How do we keep our children and young people from acting as though life were a video game or a movie? In life, the blood is real, and when the scene is finished, there is no director yelling “cut.” The wounded are still wounded, and the dead stay dead. And the grieving loved ones are left silently screaming, “No, No, No” and wondering, “What could I have done? What should I have done?”

Youths will forever be prone to misjudgments and accidents. A random accident is a tragedy, but when our worst fears come true, it is unbearable to think it was the consequence of a deliberate decision to court disaster or in pursuit of a cheap thrill. How do you cope with a mind destroyed by sniffing glue, with a life damned by cocaine, with a child gone forever after a bout of binge drinking?

Isn’t it time for grown-ups to teach kids how to deal with today’s awful realities? Haven’t we had enough deaths from kids who have bought into the utopian silliness foisted off on our children by those whose leftist agenda is more important than our own flesh and blood who are the nation’s future?