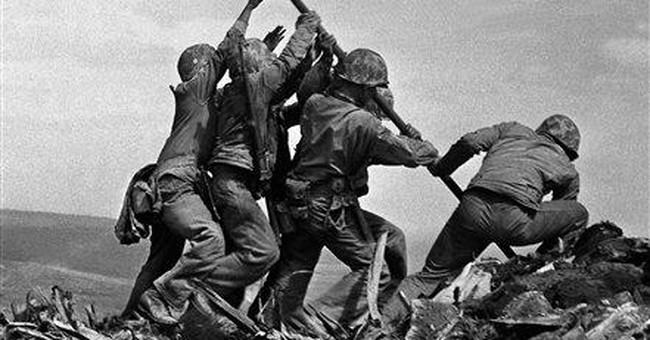 This past Sunday morning, we arrived with our weekend guests at the Washington National Cathedral just as the service was beginning and quickly found seats. Almost immediately, we noticed the attractive tourist family in the row immediately in front of us. They seemed to be typical tourists — him in his flowered shirt, shorts and running shoes, her in her jeans skirt, rose-colored knit shirt and sandals. The two older children were in t-shirts and khakis. They were all clean cut but on the casual side.

Despite their typical appearance, it gradually became apparent that this was not your average family of tourists in Washington to see the sights.

After the service, when we were complimenting the parents on their well-mannered children, we learned that the family had journeyed to Washington for the burial of the wife’s father in Arlington National Cemetery earlier in the week. Her father was a Vietnam veteran, and she proudly related the fact that he had won the Silver Star for valor in combat.

Many visitors, like us, view the magnificent edifice of the National Cathedral, hear the wondrous choir and organ, worship with people from around the country, and then return home with nothing more than photographs to illustrate the majesty of the cathedral and scribbled notes about the sermon they heard. But seeing the couple with their three children was a lasting image for our minds and hearts on this Sunday morning. For one thing, though they were not in a familiar setting and had no children’s books or toys to keep them occupied, the two older children’s quiet and respectful behavior spoke volumes about what they had been taught; they clearly had more than a little experience with being calm and orderly during Sunday worship. Snuggled in her carrier on the seat between the mother and father, the youngest child, an infant, slept undisturbed.

Anyone not watching closely would have missed the moment when the switch in seating arrangement was made. During an opening hymn, in a move as smooth as any quarterback’s handoff to his running back, the father shifted the baby’s carrier to his own seat and moved to stand by his wife. He handled the baby carrier with such strength and deftness that it was clear the role of protector was ingrained. Later on when the infant opened its incredibly bright eyes, the father, with sure hand, nudged the pacifier back into her mouth so gently that she fell back asleep almost immediately. Her dark eyes were so beautiful; it was a bit disappointing to have only the briefest glimpse of them. But it was wonderful to think of a little one so carefully protected and obviously cherished that it was not discomforted in the least by all that was going on around her.

As the man moved alongside his wife, her hand slid up under his elbow, almost as though it had a mind of its own, to lightly and comfortably rest on his forearm. Seeing the contact, I recognized it as yet another visible expression of the emotional bond that linked them. Even after many years together, those in the grip of love have an inexplicable need to affirm over and over again — sometimes through words, but even more often through touch — “I am yours. You are mine. We are one!” Such touches are a simple expression of love, but somehow they always warm our hearts and comfort our spirits.

Later, as we stood and sang another hymn, the mother leaned toward the daughter, who appeared to be about 6 or 7 years of age, and with her finger traced the location of the words to assist the daughter’s fledgling efforts. When we sat back down, the father’s arm came comfortably to rest lightly on the mother’s back –– not in showy ostentation, but in a seeming expression of the deep-seated human need to feel directly connected to those we love.

Like a screensaver on a computer etching out an image, little by little as they worshipped, the signs were blossoming into a clear picture of the relationship of this couple and their children. By the time the Eucharist was celebrated near end of the service, I was not the least surprised — and inwardly applauded — when the father demurred at the usher’s assurance that the baby would be all right if it were left sleeping where it lay while the parents took communion with the older children. Instead, with one strong hand, the dad lifted the carrier and held it by his side as the family moved forward to receive the elements. The infant was still fast asleep when they returned to their seats.

The sermon this week addressed the holy moments — healing moments — afforded to us when we devote the Sabbath to worshipping God. Included in the homily was a discussion of the story in Luke’s Gospel of Christ’s encounter on the Sabbath with a woman who had been infirmed for 18 years and was so bent over that she could not straighten. Seeing her, Christ’s heart was moved. He had compassion on her, and, with a healing touch, released her from the oppression of her infirmity.

To my mind, the morning’s message harmonized perfectly with the picture of the grieving family seated in front of us who had come that day to worship despite their loss. Seeing the love they shared revealed through touch helped illustrate why the Scriptures speak of God as a loving father, of Christ as one who desires a relationship as intimate as marriage with His bride, the Church, and of our own incompleteness without contact with Him.

What mysteries we glimpse wrapped up in the tell-tale touch.