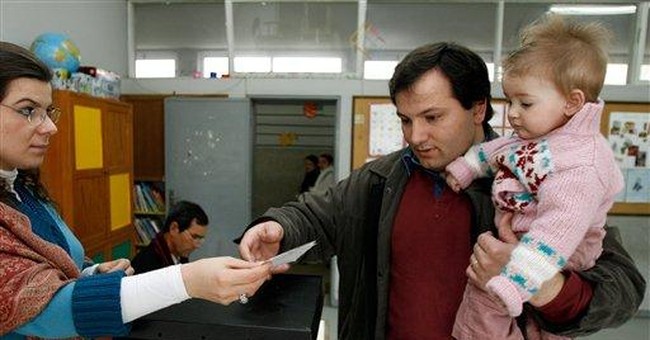 Let’s briefly review two contradictory United Nations (U.N.) talking points. (1) Abortion is a matter of “women’s rights;” (2) Killing a “girl child” in the womb is “the most extreme form of violence against women.” To hold both of these beliefs at the same time means to live with constant cognitive dissonance.

It doesn’t take a genius to realize that the U.N. is on the horns of a dilemma; that is, the two alternatives are mutually exclusive. Holding one point of view means that you cannot believe the other proposition. How can the U.N. embrace the position that abortion is morally unobjectionable while condemning abortion for sex selection? Having the abortion option, they claim, is regrettable, but necessary. Sex selection abortion, however, is a morally reprehensible crime against the “girl child.” Only in the U.N. universe would people think that this makes sense.

Amazingly, the U.N. admits the humanity of unborn girls: “At least 60 million girls who would otherwise be expected to be alive are ‘missing’ from various populations as a result of sex-selective abortions or neglect.” The concept of “missing” girls is prevalent throughout the U.N. headquarters on posters and in brochures and books rightly lamenting the girls who have been aborted.

India tops the list for sex-selection abortions (called feticides) and female infanticide. Experts claim that the number of feticides in India is growing. Indira Patel, a global expert on harmful cultural, traditional and religious practices, in a presentation this week at the Commission on the Status of Women, said that 96 percent of aborted fetuses in India are female. Some experts claim that there are nearly 2 boys born for every girl since 20 million female fetuses have been aborted over the last 10 years. Patel quotes families who justify their decision by saying, "Better to pay $38 for an abortion now than $3800 for a dowry later on.” A Delhi-based non-governmental organization (NGO) reported, “Thousands of female infants are murdered in their mother’s wombs or are born to die; the justification is that a girl child is better dead than alive in a society which views her as a financial burden.”

Julia Motoc, the U.N. Special Rapporteur on Human Rights, pointed out in a session at the U.N. this week that most countries have laws prohibiting sex selection abortions, but that when the culture allows for it, the laws are not enforced.

A major reason for sex-selection abortion (called “gendercide” in some circles) is the common preference for having a son rather than a daughter. Even when a daughter is not aborted, she is often neglected and denied basic needs such as nutrition, health care and education in preference to her brothers. According to reports from India, genetic testing for sex selection has become a booming business, especially in the northern regions of the country. Women’s groups have protested the gender-detection clinics that advertise terminating a female fetus.

India is not alone in its preference for the male child. Muhammad Ali, former boxing champion in the United States was once asked by a reporter how many children he had. He replied, “One boy and seven mistakes.” China has announced that it will criminalize sex-selection abortions. Given the looming shortage of females, Chinese researchers have predicted that there will be 40 million unmarried men in mainland China by the year 2020. Experts report that such a surplus of unmarried men will, inevitably, mean more violence, including war, kidnapping and rape. Indeed, China has seen a sharp rise in violent crime over the past decade.

Other crimes also accompany shortages of women in nation states. China is a major destination country for sex trafficking in part because of the shortage of marriageable women there. Pakistan and Afghanistan have significant numbers of sex-selection abortions, but the problem is not yet having the impact that it is having in China and India. In addition to sex trafficking, there is a rise in bride trafficking –– Korean men, for instance, are finding brides in Vietnam.

The United Kingdom (U.K.), too, has outlawed “sex selection for social reasons.” The U.K. based bioethics group, Human Genetics Alert, argues, “If we allow sex selection it will be impossible to oppose ‘choice’ of any other characteristics, such as appearance, height, intelligence, etc. The door to ‘designer babies’ will not have been opened a crack –– it will have been thrown wide open.”

These facts led Bill Saunders, Human Rights Counsel, Senior Fellow and Director, Center for Human Life and Bioethics at the Family Research Council, to say, “The true ‘plight of the girl child’ is that she is being aborted out of existence. Recent demographic studies show a growing dearth of female births around the world. This trend is increasing, as couples (and governments) try to ‘engineer families.’”

The abortion dilemma of the radical feminists and other leftists at the United Nations won’t be resolved anytime soon and the ramifications continue to worsen. The bodies of the aborted babies are out of sight but the staggering long-term consequences of the “missing” lives continue to dramatically cumulate.

Sow the wind, reap the whirlwind. The lie that produced the illogical abortion dilemma is the same lie that is snuffing out thousands of lives and wreaking havoc on human dignity. In due time, the bitter fruit of “choice” will be recorded in the pages of history . . . after the plagues that struck Egypt, after the World Wars of the 20th century.