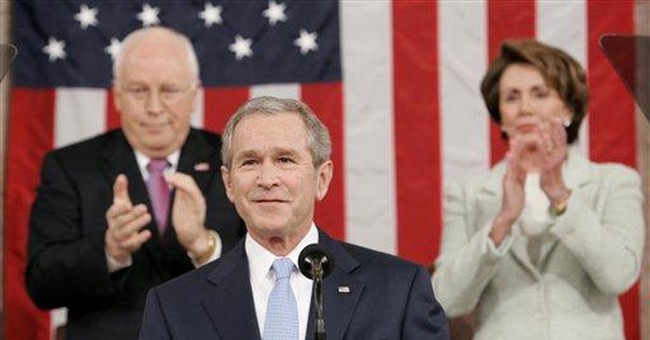 President Bush faced a chamber far more chilly and partisan than he faced in previous State of the Union addresses when his party was in power. His graciousness to the Speaker of the House, Nancy Pelosi, set a conciliatory tone necessitated not just by the new climate of contentiousness, but also by his record low approval ratings in the latest polls. Mentioning the Speaker’s late father, a former Congressman from Baltimore, as he congratulated the Speaker spoke volumes about his sensitivity to the new realities and his intentions to deal respectfully with the opposition, as did his reference to the two absent members who are recuperating.

I had to admire the President’s fortitude; he did not let the situation intimidate him. He spoke with more conviction and forcefulness than usual. There was no question about his determination to stay the course. One has to admire that steadfastness and, hope that, perhaps, history will prove him right. Certainly, it will be years before we will know the outcome of the war in Iraq. The ambivalence in the Chamber was obvious –– even among the President’s party. There were only 60 applause interruptions though usually there are at least 70.

There were three high points in the President’s remarks. (1) He presented a strong case for our involvement in Iraq. He laid down a gauntlet by revealing some of the ways that the United States has prevented further attacks since 9/11 and by listing the explicit statements of our enemies indicating their evil intent toward America. He stated emphatically that the United States must ensure our nation’s security. The key line about the war was “This is not the fight we entered in Iraq, but it is the fight we are in . . . Let us find our resolve and turn events toward victory.” (2) He addressed both earmarks and entitlements. The President laid the facts bare: In 2005, there were 13,000 earmarks totaling nearly $18 billion. He bluntly admitted that we are failing in our duty regarding Social Security, Medicare and Medicaid. His solutions, though, fell far short of being either inspiring or challenging; they sounded like something a committee would come up with. (3) The conclusion of the speech consisted of stories about four people whose courage exemplifies the American spirit. All four were in the gallery and their stories truly were heartwarming. But why did he not also focus on one of the hundreds of heroes who are working to counter the nation’s cultural disintegration and the breakdown of our nation’s families?

In fact, overshadowing all the high points of the speech, unbelievably, the President virtually ignored the issues of the people who voted him into office. He spent about 30 seconds talking about getting an up or down vote on his judicial nominees. Otherwise, he “dissed” the social conservatives. In the conference call with conservatives the day before the speech, Karl Rove said that the 40-minute speech would be split half on domestic issues and half on foreign policy. Not so. Even the domestic issues that made the cut –– energy, budget, health care, immigration –– were framed with the Democrats in mind.

The theme of the President’s remarks was “hope and opportunity.” Conservatives had such high hopes for “their President.” This speech was an opportunity for him to make the case for the Iraq war –– briefly and powerfully –– and then move the nation beyond that quagmire to help the public see the bigger picture. In short, we hoped that he would be able to provide a view of the forest instead of a tour through the trees. The Democrat response –– which is usually a dismal exercise in futility –– was an example of what the President should have done. Senator Jim Webb (D-Virginia) gave an exceptionally well-crafted speech –– made even more powerful by his rich, deep voice and authoritative delivery –– that focused on the two pivotal issues where his party differs from the President’s –– domestic “economic disparities” and “faulty foreign policy.” Instead of a laundry list of policy formulations, Mr. Webb developed a persuasive and emotional argument for the liberal position on the two issues. Though his arguments were often flawed, the power of his delivery and the emotional impact of his rhetoric will be what people remember.

The President had an opportunity in this speech to recapture the confidence and trust of the American people. That should have been his top priority. There were sections of the speech that developed strong, persuasive arguments. There were parts of the speech where he came through as thoroughly “presidential.” He scored points at the outset by his courtesy and graciousness to the Speaker. He scored points by his obvious strength in defense of his decisions regarding the war and his openness about the difficulties we face in that war. He ended with moving tributes to ordinary Americans who have done extraordinary things. The President’s recognition of their accomplishments embodied the spirit of our nation and reminded us of our resilience and potential. Only time will tell whether the President succeeded in convincing the public to take heart and believe again in the hope and opportunity of America.