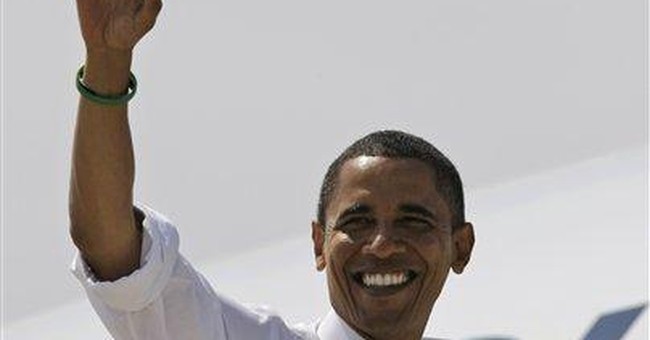 Barack Hussein Obama’s half-brother, George Hussein Onyango Obama, 26, was found living in a “two metre by three metre shack” in the ramshackle town of Huruma on the outskirts of Nairobi, Africa, according to The New York Post and The UK Telegraph. Apparently, The Washington Post and The New York Times decided it wasn’t news that’s fit to print.

The mesmerized media show no sign of stopping the margin of victory they’ve given Obama in the presidential race as reported recently by the Media Research Center.

But, the following day Barack blasted John McCain for having too many houses. Both papers devoted liberal space to it (pun intended) including flattering photos of Obama—the one with the $1.6 million Chicago mansion—not the one with the shack, lest you’re confused about which Hussein.

And once again, neither paper mentioned Obama’s homeless brother. Nor was there any mention that McCain doesn’t have a brother living in a shack, or that the McCains acquired their houses without the help of a convicted felon.

The Post’s column, “Obama Jumps on McCain House Comment,” opens with Obama mocking McCain for not knowing “how many houses he owns.” According to Obama, “John McCain has seven homes.” The Post actually calls McCain’s response “damning.” “Damning”? You’d think it’s McCain’s brother who’s living in the shack. But there’s no “damning” shack attack at Barack.

The Times political blog, “Obama Counts McCain’s Houses,” includes a list of McCain’s properties, some of which are separately owned by McCain’s wife, Cindy, and mentions her estimated worth at “$35 million to $100 million.”

Neither paper mentions that shortly after her husband’s election to the U.S. Senate, Michelle Obama became vice president for external affairs at the not-for-profit hospital center where she’s employed, and received an annual salary increase from $121,910 to $316,962. So much for the Obama’s concern for lowering the cost of health care.

Both papers quoted the McCain campaign’s response to Obama: “Does a guy who made more than $4 million last year, just got back from vacation on a private beach in Hawaii and bought his own million-dollar mansion with the help of a convicted felon really want to get into a debate about houses?”

Obama tried to get his audience to identify with him: “But if you're like me, and you got one house … you might have a different perspective.” I’m guessing the other Hussein does.

Obama referred back to last Saturday night’s forum at Saddleback Church when John McCain mentioned that rich might be defined as somebody making $5 million dollars. According to tax records, Obama’s “household income jumped from $991,296 in 2006 to $4.2 million in 2007,” mostly from his two best-selling books.

Could somebody at the Times or Post dial up the Obama campaign, and ask what if anything Barack intends to do about his brother living in a hovel on a $1 a month? Obama constantly mentions that poverty is a big issue for him, so the question shouldn’t be one of those “distractions” he regularly dodges. What could be more relevant in light of Obama’s outrageous criticism of America at the forum as he lamented its failure to address poverty:

“America’s greatest moral failure in my lifetime has been that we still don’t abide by that basic precept in Matthew that whatever you do for the least of my brothers, you do for me, and that notion of -- that basic principle applies to poverty.”

A presidential candidate living in a glass mansion who has a brother in a shack shouldn’t be throwing rocks at his opponent because he has too many houses. The same Gospel quoted by Obama condemns the hypocrisy of trying to remove a speck in your brother’s eye without removing the log in your own.

And one more question for Obama. How is it that John and Teresa Heinz Kerry’s great wealth and many mansions didn’t dampen Obama’s support for Kerry in 2004?

George Obama told his interviewers that “he was homeless for 10 years, including when Sen. Obama visited Nairobi two years ago.” Obama mentioned George in his autobiography, describing him briefly as a “beautiful boy with a rounded head.” He doesn’t mention George’s homelessness.

The Times says, “Obama campaign workers have fanned out in various battleground states to ask voters if they remember how many homes they own. Among the states are Pennsylvania and Florida.”

There’s no chance Obama’s workers will be fanning out to the outskirts of Nairobi, but the Times and Post should ask Obama if he’s going, unless they think a housing surplus matters more than a character deficit.