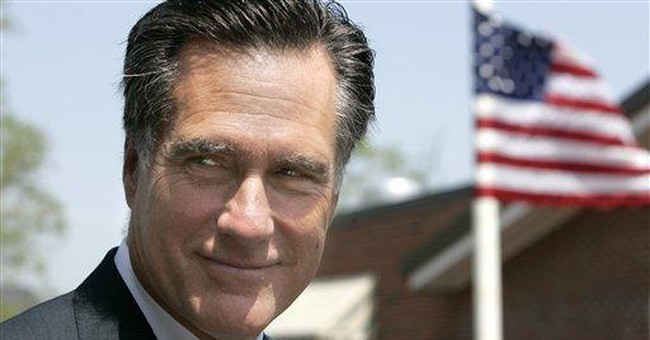 The Washington Post's May 26th editorial, Campaign Finance Flip, took presidential candidate Mitt Romney to task for calling for the repeal of McCain-Feingold, which Romney justified in a recent Townhall.com piece, The Fundamental Flaws in the McCain-Feingold Law. The editorial claims a "wrongheaded turnabout," denies that McCain-Feingold is a product of "Washington's back-scratching political class" that "imposes unprecedented restrictions on the political activities of everyday Americans" and disputes that it forces political spending into "secret corners," giving more power to "hidden special interests." The Washington Post is wrong on every count.

Romney attacks McCain-Feingold because the "electioneering communication" prohibition imposes a "free speech blackout period," where corporations, including non-profit advocacy groups, and labor unions would commit a federal crime if they mentioned the name of a federal candidate in a broadcast ad within 30 days of a primary and 60 of a general election. He says that "the American people should be free to advocate for their candidates and their positions without burdensome limitations" and that this blackout period "is contrary to the spirit of a free and open issues debate."

There can be no doubt that this "free speech blackout period" is an "unprecedented restriction on the political activities of everyday Americans." It is "unprecedented;" even the now discredited Sedition Act of 1798 required that the prohibited speech be "false, scandalous and malicious" or bring governmental officials "into contempt or disrepute."

And Senator McCain and the campaign finance lobby argue that even grass roots lobbying about upcoming votes in Congress should be banned during the blackout periods. Senator McCain intervened in two cases brought by Wisconsin Right to Life and the Christian Civic League of Maine to stop them from lobbying their Senators about the filibuster of Bush's judicial nominees, the Child Custody Protection Act and the federal marriage protection amendment.

Furthermore, the law targets groups, corporations and labor unions, exempting wealthy individuals, spending their own money, and the news media. "Everyday Americans" must pool their resources into advocacy groups to effectively participate in our democracy, and they are the ones prohibited.

The Post editorial responded that nonprofits "can run whatever ads they want as long as they pay for them through political action committee funds." This is the free speech equivalent of "let them eat cake." PAC funds are very difficult to raise with corporate and union contributions prohibited and individuals limited to $5,000 annually. If one gives more that $200 to a PAC, the PAC must publicly report the donor's home address and employer, opening up the donor and his or her employer to retaliation and harassment by disgruntled opponents and politicians.

Furthermore, all churches and charities, tax exempt under section 501(c)(3), are prohibited by the IRS from having PACs and many non-profits, like the AARP and the ACLU, don't want to become involved in partisan politics.

As for forcing political spending into "secret corners," giving more power to "hidden special interests," the Post's editorial grudgingly acknowledges that "the current campaign finance system is flawed: no doubt, some spending has been shifted into areas exempt from disclosure," but argues that the current system is "less corrupt." Does anyone really believe that our political system is better off because section 527 groups like "Americans Coming Together," "Joint Victory Fund," "Media Fund," and "Progress for America" spent more than 600 million dollars in 2004, rather than letting the Republican National Committee and NAACP spend it? What the Post now calls a "flaw," they previously called "ominous" and "buying influence."

And this was no "turnabout." Romney was and is appropriately concerned about the influence of money on politics, which is why he is for more transparency, accountability and disclosure, all of which McCain-Feingold has undermined by driving money to "secret corners." Regarding spending limits and public funding, which he previously supported, they restrict candidates, not citizens groups which he criticized McCain-Feingold for, and they proved to be such a failure in Massachusetts that he supported their repeal as Governor.

Regarding abolishing PACs, the big "turnabout" is not by Romney, who was concerned enough about PAC contributions that he didn't take any in 1994, but by the campaign finance reform lobby. The center piece of the original McCain-Feingold bill, introduced in the early 1990s, was abolishing PACs. This followed a relentless campaign by the campaign finance reform lobby, including Public Citizen, Common Cause and The New York Times, which published breathless exposes demonizing PAC contributions for their influence on legislators. Incumbent politicians were receiving about 80% of PAC contributions, and, in 1997, the PAC ban was dropped, as the result of opposition mainly from House Democrats and Senate Republicans. "Back-scratching" by the Washington political class seems like an apt, if modest, description of this.

Now, however, under the new McCain-Feingold, PACs are just a way for "citizens to play by the same rules as candidates." Not only are PACs not prohibited, they are now the required vehicle for everything a group wants to do to participate in our democracy – mention the name of a candidate, tell fellow citizens about what a politician is doing to us or for us in office, lobby him or her about an upcoming vote in Congress – all must be done through a PAC.

Nor has McCain-Feingold improved public cynicism about politics. Since its adoption in 2002 through 2004, almost 50% more Americans believe that people don't have a say in what the government does and 17% more Americans think that quite a few governmental officials are corrupt.

Finally, the Post justifies the "free speech blackout period" as stopping "sham issue advertising" – "the creation of corporate America and labor unions trying to get around the law that prohibits them from making political contributions." The news media exception belies this claim. The news media in America is owned almost entirely by six multinational corporate conglomerates, which earned total revenues in 2005 of 281 billion dollars. They can mention the names of federal candidates 24/7/365 and many in the media want to influence federal elections with this massive corporate spending.

Senator McCain recently explained, in filings in the U.S. Supreme Court, that any broadcast ads were sham efforts to influence federal elections, if they "took a critical stance regarding a candidate's position on an issue" and "referred to the candidate by name," during the blackout periods, and could be banned. It would come as a surprise to most Americans that incumbent politician have the power under our Constitution to prohibit people from criticizing them, but this is just what McCain-Feingold is intended to do. Repeal of this "deeply-flawed measure," therefore, is not "wrongheaded," but a welcome call from an aspiring Presidential candidate.