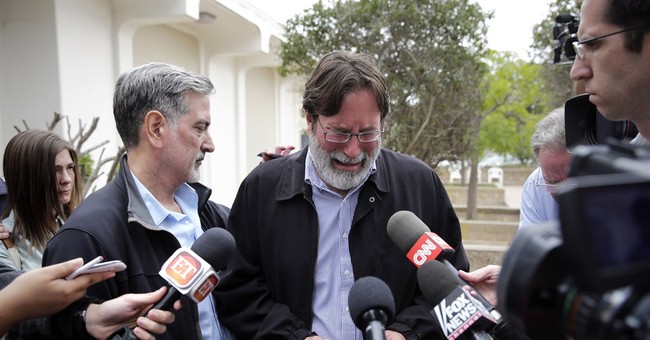 Trending
The day after his 20-year-old son, Christopher, was shot down at a deli in Isla Vista, Calif., Richard Martinez blamed his death on "craven, irresponsible politicians and the NRA." Gun-control advocates quickly seized upon Martinez's remarks, using his grief to obscure the illogic of their position.

None of the items on the anti-gun lobby's wish list makes sense as a response to the crimes of Elliot Rodger, the 22-year-old college student who murdered Martinez's son and five other people on Friday night. Far from demonstrating the lifesaving potential of gun control, the Isla Vista massacre, which took place in a state with firearms laws that are among the strictest in the nation, exposes the false promise of policies that aim to prevent violence by limiting access to weapons.

"Why did Chris die?" Martinez asked at a news conference on Saturday night. "Chris died because of craven, irresponsible politicians and the NRA. They talk about gun rights. What about Chris's right to live? When will this insanity stop?"

The next day, Dan Gross, president of the Brady Campaign to Prevent Gun Violence, declared that Martinez "got it exactly right," because "Americans are dying every day because of the corporate gun lobby and the politicians it has in its pocket." Those forces, Gross averred, are blocking "real solutions."

Such as? The only specific policy Gross mentioned was "expanded background checks." But California already has those: All gun sales in that state, including private transfers, must be handled by licensed dealers, and every buyer has to be cleared by the California Department of Justice, as Rodger was for each of the handguns he bought in 2012, 2013 and 2014.

Rodger passed those background checks because he did not have a disqualifying criminal or psychiatric record. In California, that means not only that he was never involuntarily committed, but also that he had not been put on a 72-hour psychiatric hold for evaluation as a possible threat to himself or others within the previous five years.

The YouTube video Rodger posted and the 140-page autobiography he distributed on his "Day of Retribution" gave clear indications of his violent intent. But until that point, he did not seem like a threat.

Yes, Rodger was depressed, socially isolated and desperately lonely. But how many people who fit that description become mass murderers? The difficulty of predicting which of the world's troubled oddballs will turn violent is the reason "expanded background checks" cannot stop this sort of crime.

California also has adopted two other recently popular gun-control measures: It bans "assault weapons," identified by certain military-style features that all of Rodger's guns lacked, and it limits magazines to 10 rounds. Rodger was carrying 41 such magazines along with his three legally purchased pistols, although he killed himself before he got around to using the extra ammunition.

According to his autobiography, Rodger began plotting his revenge against the "beautiful girls" who would not give him the time of day and the "obnoxious young brutes" they preferred as early as the summer of 2011. So he obviously was not deterred by California's 10-day waiting period for taking possession of a firearm or its one-per-month limit on handgun purchases.

One can imagine policies that might have stopped Rodger, but they are neither practical nor constitutional. If the government not only banned guns, but also somehow managed to confiscate the 300 million or so that Americans already own, that would have put a damper on Rodger's plans, although he used knives to kill half of the victims who died and used his car to injure others.

The New Yorker's Adam Gopnik says banning knives or cars as "instruments of death" would not be reasonable "because these things were designed to help people do things other than kill people." In other words, guns, unlike knives and cars, have no legitimate use.

If you believe that, banning guns makes perfect sense. But most Americans do not agree with Gopnik, and neither did the Framers.

Cortney O'Brien
After Being Victimized By The Left And Obama's DOJ, Carter Page Looks To Set Record Straight
Matt Vespa