The Red Line to Damascus 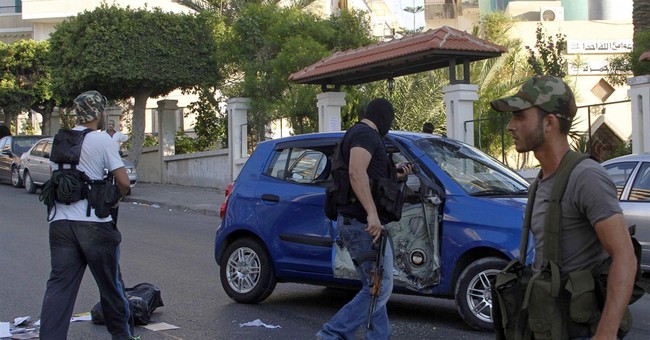 "What we're seeing taking place in Syria is heartbreaking," President Barack Obama said during a debate with Mitt Romney last October, "and that's why we are going to do everything we can to make sure that we are helping the opposition." You can't say he didn't warn us -- not only about escalating U.S. involvement in Syria's civil war but also about the lack of a credible argument for it based on anything resembling national defense.

Judging from the explanation that deputy national security adviser Ben Rhodes gave last week for Obama's decision to start arming the Syrian rebels, the president painted himself into a corner with his own red line. "The president has been clear that the use of chemical weapons ... is a red line for the United States," Rhodes told reporters, "as there has long been an established norm within the international community against the use of chemical weapons."

As he did in the case of Libya, Obama cites international authority to justify joining a war against a Middle Eastern despot. The "international community" drew a line, so he did, too, leaving him no choice but to intervene more forcefully once U.S. intelligence agencies confirmed that, as Rhodes put it, "the Assad regime has used chemical weapons, including the nerve agent sarin, on a small scale against the opposition multiple times in the last year."

In the context of a war that has killed some 93,000 people so far, it is not clear why the 150 or so casualties the White House attributes to chemical weapons should make a decisive difference, except that the president threatened "enormous consequences" in response to any use of such weapons. "If Mr. Obama did not respond in some fashion," The New York Times explained, "it would have been taken as a question of credibility since he had previously said such a development would change his calculus."

This perceived need to preserve credibility is a key ingredient in any foreign policy quagmire because it discourages second thoughts and dictates stubborn persistence in the face of failure. No matter how misguided in theory or disastrous in practice an intervention is, changing course is always a threat to credibility, a threat that looms larger the farther a president goes down the wrong path. All the more reason to resist what Obama used to call "a war of choice."

The case for caution is reinforced by the fact that, odious as the current government of Syria is, there is no guarantee that whatever follows the current government will be better, especially because the strongest element of the opposition forces is militantly anti-American. No matter what the Obama administration says about making sure that U.S. weapons go to the right rebels, it is effectively siding with Sunni extremists against Shiite extremists in a sectarian war.

Polls indicate that Americans overwhelmingly reject the idea that the U.S. has a responsibility to help rebels allied with al-Qaida to defeat a dictator allied with Hezbollah. But instead of heeding that message, Obama seems to be taking advice from Bill Clinton.

"When (voters) tell you not to do these things," the former president opined the day before the White House announced its plans to arm the Syrian opposition, "they're not telling you not to do these things." He continued, "They hire you to win ... to look around the corner and see down the road." He urged Obama not to "look like a total wuss" by staying out of a civil war 6,000 miles away.

History suggests that Clinton overestimates the ability of mere mortals to "see down the road." The very intervention he cited as a model of smart foreign policy -- arming Afghan mujahedeen against the Soviets in the 1980s -- had the unforeseen consequence of strengthening America's future enemies.

But the architect of a stable and peaceful Somalia is unfazed, warning that "we shouldn't over-learn the lessons of the past." That does not seem to be the danger we are facing right now.