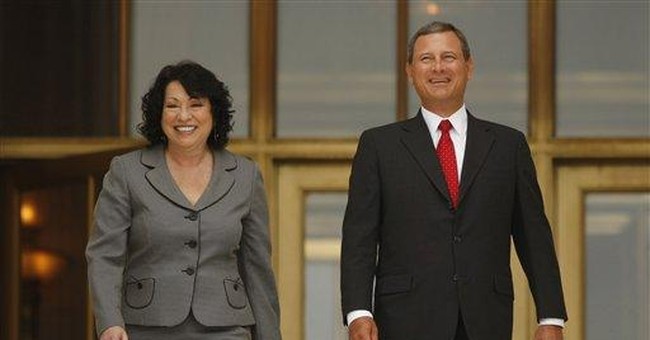 Rather than a "penalty" imposed on anyone who "fails to comply" with the "requirement to maintain minimum essential coverage," which is how the law itself describes the policy, Roberts perceived a "tax" that hinges on whether one follows the government's totally nonmandatory guidelines regarding health insurance. This implausible relabeling of reality was Roberts' desperate attempt to uphold the provision formerly known as a mandate without endorsing a boundless view of Congress' power to regulate interstate commerce. Instead he endorsed a boundless view of Congress' tax power that could prove even more dangerous to liberty.

During the 2009 debate over the health care law, President Obama insisted that the "shared responsibility payment" assessed on Americans who fail to obtain government-approved medical coverage is not a tax. "I absolutely reject that notion," he told ABC's George Stephanopoulos that September. "For us to say that you've got to take a responsibility to get health insurance is absolutely not a tax increase."

After the law was enacted and challenged in court, the Obama administration changed its tune, arguing that the mandate is a legitimate exercise of the power to "lay and collect taxes." That claim, which no court accepted until last week, contradicted the language of the statute and statements by members of Congress.

It even contradicted another argument the administration's lawyers were making in the same case. The Anti-Injunction Act bars lawsuits "for the purpose of restraining the assessment or collection of any tax." That meant that if the "shared responsibility payment" were deemed a tax, its opponents would not be able to challenge it until 2014, when it was scheduled to take effect. Preferring a quicker resolution, the Obama administration insisted that the payment, which it was simultaneously defending as a tax, was not a tax.

Roberts swallowed and regurgitated all of that illogic because, unlike the four dissenting justices, he was not prepared to overturn the health care law but, like them, could not accept the notion that forcing people to buy stuff counts as regulating interstate commerce. He warned that "allowing Congress to justify federal regulation by pointing to the effect of inaction on commerce would bring countless decisions an individual could potentially make within the scope of federal regulation and -- under the government's theory -- empower Congress to make those decisions for him."

But recasting regulation as taxation only magnifies this danger. Under the government's view of the Commerce Clause, Roberts worried, Congress could order Americans to buy vegetables, citing the impact that poor diet has on health care costs. Under Roberts' view of the tax power, Congress could do much the same thing, imposing a levy on people who fail to buy vegetables. It would not even have to allege a "substantial effect" on interstate commerce. Indeed, Roberts said "the breadth of Congress' power to tax is greater than its power to regulate commerce."

By way of reassurance, Roberts added that the former approach "leaves an individual with a lawful choice to do or not do a certain act, so long as he is willing to pay a tax levied on that choice." People who decide not to pay a tax, of course, can get into plenty of legal trouble, including criminal prosecution as well as liens and forfeiture.

For political reasons, Congress barred the IRS from using those scary remedies to extract the "shared responsibility payment." The insurance mandate was controversial enough without raising the prospect of taking people's homes or throwing them in prison if they failed to obey it. Future "tax" legislation aimed at getting Americans to behave as members of Congress think they should may not be so gentle.