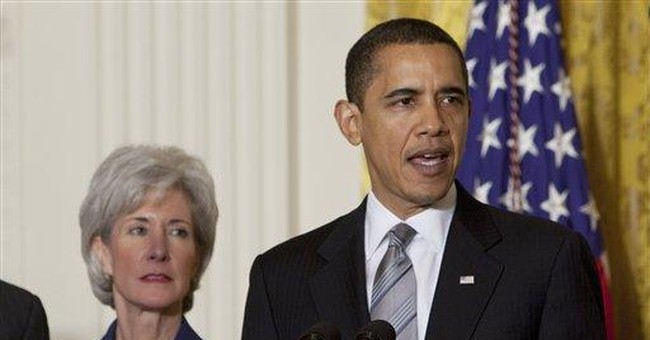 In his speech to Congress last week, President Obama promised to "go line by line through the federal budget in order to eliminate wasteful and ineffective programs." Although the process was not completed yet, he said, "we have already identified $2 trillion in savings over the next decade."

But it turns out that tax increases account for half of those "savings." From Obama's perspective, it seems, letting people keep their own money qualifies as a "wasteful and ineffective program." That makes sense if you believe all resources are the government's to distribute as it sees fit, which is the premise underlying the multitrillion-dollar spending binge that Obama calls "A New Era of Responsibility."

Under the Bush administration, Obama said, "a surplus became an excuse to transfer wealth to the wealthy." Whatever you think about the wisdom of Bush's tax cuts, they amounted to taking less from people, not giving more to them. Obama makes it sound as if there is no meaningful difference between robbing Peter to pay Paul (which is what he has in mind when he talks about "rebalancing the tax code") and leaving Peter alone (or, more accurately, robbing him less thoroughly) -- except that the latter option is, in Obama's view, morally inferior.

The same attitude is apparent in the Obama administration's defense of its plan to limit tax deductions for households earning more than $250,000 a year. Peter Orszag, Obama's budget director, says it's "a question of fairness." How so? "If you're a teacher making $50,000 a year and decide to donate $1,000 to the Red Cross or United Way, you enjoy a tax break of $150," Orszag explains. "If you are Warren Buffet or Bill Gates and you make that same donation, you get a $350 deduction -- more than twice the break as the teacher."

In response to nonprofit organizations worried that limiting the deduction for charitable contributions will reduce donations, The Washington Times reports, Orszag "said Mr. Obama took care of that by giving charities government money to make up part of the difference." Orszag noted that "in the recovery act, there's $100 million to support nonprofits and charities." In essence, then, Obama plans to take money people otherwise would have given to the charities of their choice and give it to the charities of his choice.

Obama insists he is only raising taxes on "the wealthy" and emphasizes that "the recovery plan provides a tax cut … for 95 percent of working families" -- a credit of $400 per taxpayer. Yet even leaving aside the enormous increase in debt on which Obama's spending relies (which will mean higher taxes in the future), the cut he promises is illusory.

To continue the tax credit past two years, Obama is counting on $646 billion in revenue from "a market-based cap on carbon pollution," which has essentially the same impact as a carbon tax, although the cost is less explicit: It raises the price of every product and service that contributes to carbon dioxide emissions, and it reduces economic growth, making everyone poorer than they otherwise would have been. At best, the tax credit will make up for a fraction of these effects.

Even the name of Obama's tax credit is insulting: "Making Work Pay." What makes work pay is the willingness of other people to pay for it. Taxes subtract value from this arrangement; they do not add to it. Obama not only wants to take his cut; he wants to take credit for taking less than he could have -- indeed, for letting you keep anything at all. As far as he's concerned, the fruits of your labor are yours only by the grace of government.