Fear Is His Friend 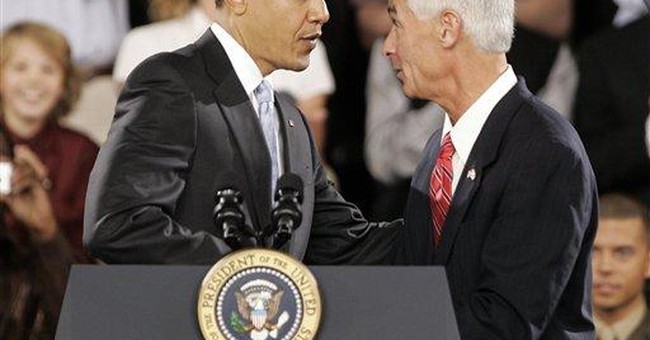 I flashed back to the fall of 2001 upon reading the subhead over a New York Times story about Monday's presidential press conference: "He Says That Failing to Act Could Lead to Catastrophe." To rush a complex, ill-considered piece of legislation through Congress, George W. Bush invoked the specter of another terrorist attack. Barack Obama, bringing the change he promised, invoked the specter of economic collapse.

Just as the PATRIOT Act was a grab bag of legal changes that law enforcement and intelligence agencies had been seeking for years, the American Recovery and Reinvestment Act is a grab bag of expenditures that leftish Democrats have long wanted, repackaged for the crisis du jour. In both cases, instilling fear was the key to suspending skepticism and cutting off debate.

In a Washington Post op-ed piece last week, President Obama warned that if Congress did not immediately pass the American Recovery and Reinvestment Act, "our nation will sink deeper into a crisis that, at some point, we may not be able to reverse." While Bush gave us the concept of the never-ending War on Terror, Obama has introduced the idea of the never-ending recession, a phenomenon that has never been seen before but that can be averted only by uncritically approving his spending priorities.

"We can't afford to make perfect the enemy of the absolutely necessary," Obama declared in his weekly radio address on Saturday. "The time for action is now." During an appearance in Elkhart, Ind., on Monday, he said, "the situation we face could not be more serious" and insisted, "we can't afford to wait." At his press conference that evening he said, "a failure to act will only deepen this crisis" and "could turn a crisis into a catastrophe."

Obama insisted there was no time for debate. "We can't posture and bicker," he said in Elkhart. "Endless delay or paralysis in Washington in the face of this crisis will only bring deepening disaster." At the same time, he claimed there had been plenty of debate already: "many weeks of debate and discussion," as he put it at the press conference.

The stimulus bill was introduced in the House on Jan. 26 and passed two days later. The Senate began debating its version last week and approved the bill this week. No hearings were held in either house. If that's Obama's idea of "many weeks of debate and discussion," verging on "endless delay or paralysis," maybe we should not worry so much about his prediction of an endless recession.

The false sense of urgency created by the president was designed to override two kinds of doubts: about Keynesian stimulus spending generally and about this package in particular. "Doing nothing is not an option," he said in Elkhart. It should be, especially when the something the president wants to do could be worse than nothing, adding $1 trillion to the national debt and diverting resources from more productive uses without delivering on the promise to "jolt our economy back to life."

And that probably won't be the end of the story. At Monday's press conference, Obama said the Japanese government "did not act boldly or swiftly enough" in the 1990s, when it spent trillions of dollars on construction projects in a vain attempt to revive the country's economy. From his study of Japan, the Times reports, Treasury Secretary Timothy Geithner concluded that "spending must come in quick, massive doses, and be continued until recovery takes firm root."

As with the PATRIOT Act, the success of Obama's Recovery and Reinvestment Plan will be hard to assess. If the Bush administration can take credit for the absence of terrorist attacks without any firm evidence that its policies were decisive in preventing them, the Obama administration can take credit for an economic recovery that would have occurred anyway. I hope that's what happens, because otherwise we can expect further expensive sacrifices to the god of economic stimulus.