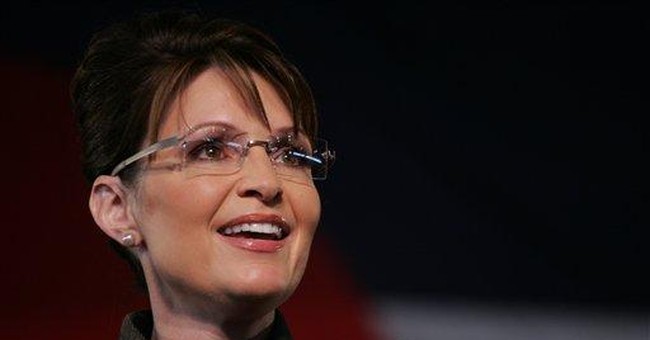 When it comes to questions about youthful marijuana use, Sarah Palin is no Slick Willie. "I can't claim a Bill Clinton and say that I never inhaled," the Republican vice presidential candidate told the Anchorage Daily News in 2006, before she was elected governor of Alaska.

Although Palin's handling of the issue scores higher on the candor meter than Clinton's, she has the same difficulty reconciling her personal experience with her policy positions, a problem also shared by former pot smoker Barack Obama. None of them has a persuasive answer to the question of why other Americans should be arrested for something they did with impunity.

Pot smokers who are arrested do not typically spend much time in jail. But as a 2007 report from the Center for Cognitive Liberty & Ethics noted, they pay a substantial cost that includes not only public humiliation and legal expenses but collateral sanctions such as "revocation or suspension of professional licenses, barriers to employment or promotion, loss of educational aid, driver's license suspension, and bars on adoption, voting and jury service."

According to figures released by the FBI this week, about 873,000 people were arrested on marijuana charges in the United States last year, a new record. Pot busts accounted for nearly half of the 1.8 million drug arrests; as usual, the vast majority, about 775,000, were for simple possession, as opposed to cultivation or sale.

This is the fifth year in a row that marijuana arrests have increased, but the upward trend began in the early 1990s. Three times as many people were arrested on marijuana charges last year as in 1991.

The increase in arrests does not correspond to an increase in use; instead, the chance that any given pot smoker will be busted (though still small) is much higher than it was two decades ago. It is also higher than when Palin attended college in the '80s, which is presumably when she tried marijuana.

By way of extenuation, the Anchorage Daily News reported, Palin noted that marijuana "was legal under state law," although "illegal under U.S. law." In 1975, the Alaska Supreme Court ruled that the state constitution, which says the "right of the people to privacy is recognized and shall not be infringed," prohibits the government from punishing people for possessing small amounts of marijuana in their homes.

A 1990 ballot initiative ostensibly recriminalized all marijuana possession, but in 2003, the Alaska Court of Appeals ruled that "a statute which purports to attach criminal penalties to constitutionally protected conduct is void." The following year, the Alaska Supreme Court declined to hear the state's appeal of that decision.

In 2006, the state legislature, at the urging of Palin's predecessor, Frank Murkowski, passed another law that supposedly made private possession of marijuana for personal use a crime. A judge found that law unconstitutional as well, and the Alaska Supreme Court is considering an appeal of her ruling.

The upshot is that smoking marijuana in the privacy of one's home is just as legal in Alaska today as it was when Palin did it. Evidently, she regrets this situation.

As mayor of Wasilla in 2000, Palin championed a city council resolution opposing a ballot initiative that would have legalized marijuana for adults. In March her administration asked the Alaska Supreme Court to reverse its 1975 decision shielding private marijuana use, arguing that the drug is more dangerous than it used to be.

In other words, Palin got to smoke pot without worrying about legal consequences and now wants to deny that assurance to fellow Alaskans doing exactly the same thing. "Palin doesn't support legalizing marijuana," the Anchorage Daily News reported in 2006, because she worries about "the message it would send to her four kids."

It's Palin's job to teach her children that certain pleasures are reserved for grownups. The government should not continue to arrest adults who are harming no one simply because her children are easily confused.