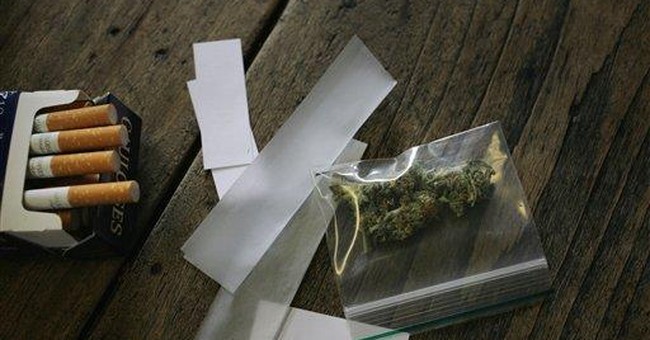 "This is a difficult case," writes Judge Michael Hawkins, dissenting from a recent decision by the U.S. Court of Appeals for the 9th Circuit. That is not the way most people respond when they hear about Savana Redding, who was strip-searched in 2003, when she was 13, by Arizona public school officials looking for ibuprofen pills in her underwear.

Nor is it the way most of Hawkins' colleagues reacted. Eight of the 11 judges who heard the case agreed that Vice Principal Kerry Wilson's decision to order a "grossly intrusive search of a middle school girl to locate pills with the potency of two over-the-counter Advil capsules" violated Savana's Fourth Amendment rights.

But Hawkins' conclusion that the fruitless strip search was reasonable under the circumstances, an opinion shared by two of his 9th Circuit colleagues and the federal judge who first heard the case, shows Wilson is not alone in thinking that when it comes to preventing teenagers from using drugs, pretty much anything goes. The U.S. Supreme Court itself has come perilously close to endorsing that position.

In a 1985 decision upholding a high school principal's perusal of a purse belonging to a freshman who was caught smoking in the girls' room (a search that found marijuana as well as cigarettes), the Court said public school officials, as agents of the government, are bound by the Fourth Amendment's prohibition of unreasonable searches and seizures. But given the importance of maintaining order at school, it said, officials do not need a warrant or probable cause to search a student; it's enough that the search is "justified at its inception" and "reasonably related in scope to the circumstances which justified the interference."

In subsequent cases, the Court has indicated that a search can be deemed reasonable even when officials have no grounds to suspect a student has done anything wrong. In 1995, it upheld random drug testing of student athletes, and in 2002, it said that requirement could be extended to all students participating in extracurricular activities.

To justify compelling a student to urinate into a cup under a teacher's supervision and surrender the sample for laboratory analysis, the Court not only did not require any evidence that the student was using drugs; it did not require any evidence of a drug problem at the school. The fear of a potential drug problem was enough, in its view, since "the nationwide drug epidemic makes the war against drugs a pressing concern in every school."

This pronouncement (which came at a time when illegal drug use among high school students was declining) would seem to justify random urine testing of all students, whether or not they join the football team or drama club. When anti-drug hysteria is so widespread that the nation's highest court suggests the crusade for pure bodily fluids trumps the Constitution, you can start to see how someone like Kerry Wilson might conclude that it was reasonable to make an honor student with a clean disciplinary record disrobe based on a fellow eighth-grader's uncorroborated accusation that she had brought unauthorized Advil to school.

The drug policy at Wilson's school, which bans even over-the-counter medication without advance approval, exemplifies the "zero tolerance" zealotry that has been embraced by schools throughout the country. According to advocates of this approach, preventing drug abuse is so important that schools should rigidly enforce clear, simple rules without regard to a student's intent or the danger he poses.

Combine this mind-set with a greenish light from the Supreme Court, and you may see extreme measures like strip searches deployed against trivial offenses like ibuprofen possession. As Judge Hawkins notes, the Supreme Court's test for student searches "eschews any clear rules in favor of a highly abstract balancing standard that is meant to reflect nothing more than 'the dictates of reason and common sense.'" The problem with this standard, as Kerry Wilson showed, is that common sense is not as common as it should be.