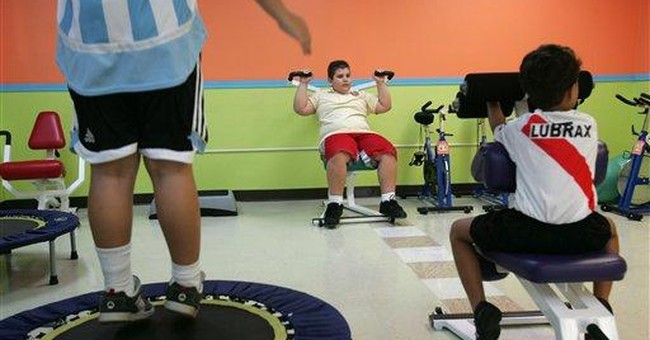 Yet, that weight is not normal since two-thirds of American adults exceed it. And judging from the latest research, it is not necessarily healthy, either. According to a study recently published by The Journal of the American Medical Association, people in the government-recommended BMI range of 18.5 to 24.9 are more likely to die from a variety of diseases than people with BMIs of 25 to 30.

The JAMA study updates research by Katherine Flegal of the National Center for Health Statistics and three other government-employed scientists, who two years ago scandalized the public-health community by concluding that the annual death toll associated with excessive weight was far lower than the U.S. Centers for Disease Control and Prevention had been claiming. The CDC later reduced its estimate from 365,000 deaths blamed on "poor diet and physical inactivity" to 112,000 "obesity-related deaths."

Looking at data from the National Health and Nutrition Examination Survey, Flegal and her colleagues found that people who qualified as "obese" (with BMIs of 30 or more) did indeed have a higher mortality rate than people in the "normal" range, as did those considered "underweight." But people who were merely "overweight" had the lowest mortality rate of all.

In their new study, Flegal et al. examine specific causes of death in each weight range and find that cardiovascular disease is by far the biggest contributor to "excess deaths" among the obese. Deaths from certain cancers and the combined category of "diabetes and kidney disease" also were significantly more common than in the "normal" group.

Standing alone, these data do not prove that plumpness is healthy or that thinness kills. But they do cast doubt on some of the more alarmist predictions made by "obesity epidemic" doomsayers.

"This could be the first generation of American children to lead shorter lives than their parents," warns Yale obesity expert Kelly Brownell, who urges a panoply of taxes and regulations aimed at averting that disaster. Yet, there's no evidence that life spans are getting shorter in the United States. In fact, as Flegal et al. note, death rates from cardiovascular disease continue to decline, while the association between obesity and cardiovascular disease seems to be getting weaker.

In response to the JAMA study, obesity researcher JoAnn Manson told The New York Times that "health extends far beyond mortality rates." In particular, extra weight can make it harder to get around, discourage exercise (lack of which helps explain the association between obesity and cardiovascular disease), and contribute to problems such as sleep apnea and arthritis.

But such day-to-day impairment is much more obvious than the lurking,lethal risk of a few extra pounds that Manson has been warning people about for years. A 1995 New York Times headline inspired by one of Manson's studies warned that "Even Moderate Weight Gains Can Be Deadly." The story quoted Manson's prediction that "it won't be long before obesity surpasses cigarette smoking as a cause of death in this country."

It looks like both of those claims were wrong. Thats good news not only for those of us who weigh more than the government says we should but for anyone who worries about the social engineers who have plans for making Americans thinner.

WATCH: Even Mainstream Sunday Shows Slam Biden's Blunders
Townhall
Calm down, lefties: Border Patrol is *not* 'rounding up Haitian refugees with whips' [pics, video]
Twitchy
Sinema Delivers a Big Message to Biden and He Definitely Won't Like It
Redstate
You'll Have Only One Question When You See This Hospital's COVID Shot Religious Exemption Form: Is This Thing Legal?
PJ Media