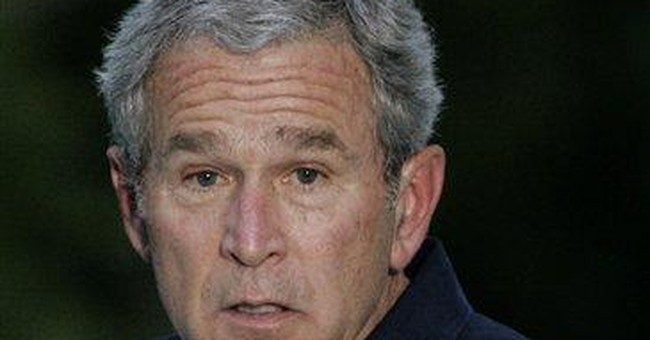 In November 2003, when he announced his "forward strategy of freedom in the Middle East," President Bush declared that "the only path to independence and dignity and progress" for the Palestinians is "the path of democracy." He added that "the consistent and impartial rule of law" is one of the "essential principles common to every successful society."

Less than four years later, the Bush administration is backing the illegal removal of a democratically elected Palestinian government. This turnaround, along with the administration's continued solicitude toward authoritarian allies such as Egypt and Pakistan, shows Bush was either insincere or mistaken in promising that the United States would no longer have to choose between promoting democracy and promoting its interests.

It's not hard to understand why Bush prefers the West Bank-based "emergency government" of Palestinian Authority President Mahmoud Abbas to the Gaza-based regime of Prime Minister Ismail Haniyeh. While Abbas' secular nationalist party, Fatah, has recognized Israel's right to exist, renounced terrorism and committed itself to a peaceful resolution of the Israeli-Palestinian conflict, Haniyeh's Islamist party, Hamas, has done none of these things.

But the fact remains that Hamas took control of the Palestinian parliament as a result of apparently free and fair elections in January 2006, the first such vote permitted by the Fatah-run government in a decade. The fighting that culminated in Hamas' takeover of Gaza was sparked mainly by conflicts over control of the various security forces, which often resemble armed gangs more than police or soldiers, loyal to particular leaders rather than the government or the people it represents.

The rivalry between Fatah and Hamas was compounded by legal ambiguity. Under the Basic Law (the Palestinian constitution), the president, Abbas, is the "Commander-in-Chief of the Palestinian Forces." At the same time, the Council of Ministers, headed by Haniyeh, has "the responsibility to maintain public order and internal security."

Once the argument between Fatah and Hamas became an armed conflict verging on a civil war, Abbas had the authority to declare a state of emergency, which allows him to rule by decree. But under the Basic Law, the state of emergency elapses after 30 days unless it's renewed for another 30 days by the Hamas-controlled parliament, which also has the right to review the president's decrees.

By supporting Abbas, then, the U.S. government has chosen peace and stability over democracy and the rule of law -- just the sort of tradeoff Bush said we'd no longer have to make. In Iraq, meanwhile, the administration continues to insist, despite all the evidence to the contrary, that democracy will bring peace and stability.

There may actually be more grounds for hope on that score in the West Bank and Gaza. Although Hamas won a majority of seats in the Palestinian parliament last year, its edge in the popular vote amounted to just two percentage points, and polling indicated that its supporters' main motivation was disgust at Fatah's corruption, as opposed to support for terrorism.

In fact, while a large majority of Palestinians tell pollsters that Israel has no right to exist, most also say Hamas should abandon its goal of destroying Israel. According to a March poll by the Palestinian Center for Policy and Survey Research, most Palestinians continue to support a two-state solution.

Furthermore, a May survey by Near East Consulting found that nearly 70 percent of Palestinians favored early elections, which Abbas is now promising. That finding suggests an argument the Bush administration can use if it refuses to admit its support for democracy is conditional: We sacrificed democracy to save it.