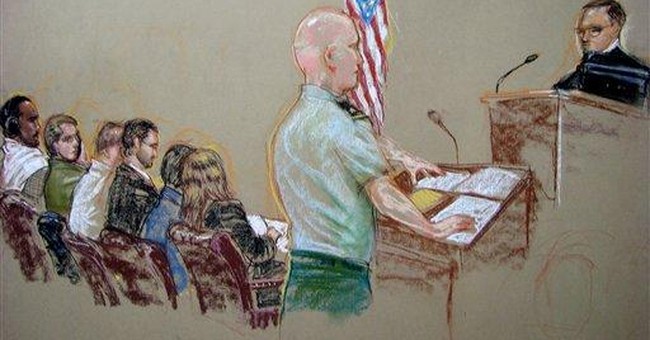 The Patriot Act, passed a month and a half after Al Qaeda's attacks on the World Trade Center and the Pentagon, gave the attorney general the authority to detain aliens suspected of terrorism for up to seven days before charging them or seeking their deportation. But according to the Bush administration, this provision was unnecessary.

By the administration's account, the president already had the authority to detain not just aliens but citizens, not just for a week but for life, based on his own determination that they qualify as "enemy combatants." Rejecting this theory, the U.S. Court of Appeals for the 4th Circuit has struck a blow for due process and the rule of law, both of which are threatened by President Bush's assertion of the king-like power to lock people up at his discretion and throw away the key.

The 4th Circuit's ruling deals with Ali al-Marri, a legal U.S. resident from Qatar who was attending graduate school in Peoria, Ill., when the FBI arrested him in December 2001. Initially held as a material witness in the 9/11 investigation, he was later charged with credit card fraud and lying to the FBI.

In June 2003, a month before al-Marri was scheduled to be tried on those charges, Bush issued an order that described him as an Al Qaeda operative and transferred him to military custody. Since then he has been imprisoned at the Navy brig in Charleston, S.C.

Bush says Congress approved this sort of detention in September 2001, when it authorized the use of military force against the "nations, organizations or persons" who "planned, authorized, committed or aided" the 9/11 attacks. He also argues that he does not need congressional permission, because he has the inherent power as commander in chief of the armed forces to hold enemy combatants in military custody until the cessation of hostilities to prevent them from returning to the battlefield.

In Bush's view, an enemy combatant is anyone he suspects of involvement with terrorism, the battlefield is the entire world and the cessation of hostilities occurs when terrorism has been decisively vanquished -- i.e., never. The upshot is that the president has the unilateral, unreviewable authority to grab legal residents and American citizens off the streets of the United States and imprison them indefinitely.

So far the courts have been reluctant to endorse this vision of presidential power, and the Bush administration has been reluctant to test it. In 2004 the Supreme Court agreed that a U.S. citizen captured in Afghanistan while allegedly fighting alongside the Taliban, Yaser Esam Hamdi, could be held in military custody, but only if the government gave him a fair opportunity to challenge its claims. Rather than do so, the Bush administration deported Hamdi to Saudi Arabia.

Two years ago the 4th Circuit itself upheld the military detention of another U.S. citizen, Jose Padilla, an alleged Al Qaeda operative who was arrested in Chicago but reportedly served as a guard at a Taliban outpost in Afghanistan. Rather than risk having that decision overturned by the Supreme Court, the Bush administration transferred Padilla back to civilian custody, and he is now on trial for aiding terrorism.

In deciding that al-Marri can likewise be tried in a criminal court but cannot legally be kept in military detention, the 4th Circuit distinguished his case from those of Hamdi and Padilla, noting that he has not been accused of taking up arms with the Taliban. "The President cannot eliminate constitutional protections with the stroke of a pen by proclaiming a civilian, even a criminal civilian, an enemy combatant subject to indefinite military detention," the court ruled, adding that such a power "would effectively undermine all of the freedoms guaranteed by the Constitution."

With the Bush administration winding down and the strong possibility of a Democrat in the White House come January 2009, perhaps Republicans will begin to see the wisdom of this warning.