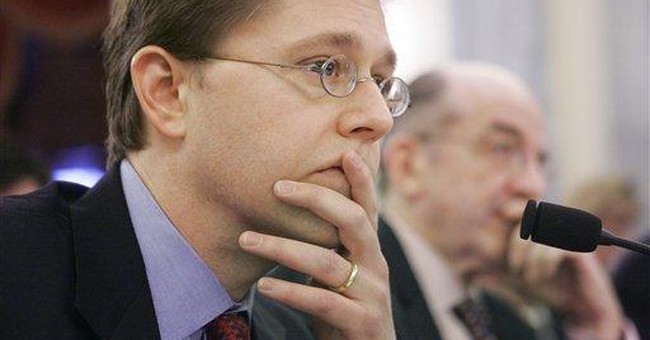 In 2004 a few dozen members of Congress asked the Federal Communications Commission whether the government could define and regulate "excessively violent programming that is harmful to children" without violating the First Amendment. Last month, after thinking about it for three years, the FCC had an answer: Sure. Go ahead.

Emboldened by the FCC report, Sen. Jay Rockefeller, D-W.Va., plans to introduce legislation aimed at regulating TV violence any day now. If he takes the same approach he did in a 2005 bill he sponsored, he will knock the ball back to the FCC, asking it to define excessively violent programming and adopt measures to protect children from it.

There's a reason no one is keen to define excessively violent programming. Anyone who tries will face insoluble practical and constitutional problems.

Because opinions about what is appropriate for children vary widely, any definition of excessively violent programming would be attacked as too narrow, too broad or both. Some critics say TV violence encourages imitation; others worry that it causes anxiety by making the world seem dangerous. The most troubling violence, some say, is the "explicit" and "graphic" kind, because it's both disturbing and desensitizing. Others worry about the "sanitized" and "glamorized" kind, which separates violence from its real-world consequences.

I'd say "CSI," "Schindler's List" and History Channel war documentaries are not appropriate for small children. Does that mean such programming should be banished to late-night hours, one solution the FCC proposes? If not, what use is "time channeling"? If so, it's hard to see why news shows covering crime and war, or sports such as football and boxing, should be exempt.

For those who worry about imitation of sanitized violence, even children's cartoons are not appropriate for children. Should "Teenage Mutant Ninja Turtles" be shown only between 10 p.m. and 6 a.m.?

Another FCC suggestion, forcing cable and satellite companies to offer channels "a la carte," is even less promising. Blocking entire channels is a clumsy way to shield kids from inappropriate material. In any case, cable and satellite subscribers already have this ability ; the FCC is just saying they shouldn't have to pay for the channels they decide to block.

The effectiveness of these rules will be an important question when courts address their constitutionality, since content-based speech regulation generally can be justified only if it's the least restrictive means of serving a compelling government interest. No restriction on violent entertainment has ever met this test.

As the First Amendment lawyer Robert Corn-Revere notes, regulations that take the context of violence into account would be scrutinized especially closely, because the government would be targeting speech based on viewpoint as well as subject. "Any attempt to regulate televised violence would face insurmountable First Amendment barriers," he concludes.

I agree. Given the tools parents have to filter what their children see, including the V-chip, ratings from producers and independent groups, and cable and satellite system controls, the excuse for regulating content on any channel is weaker than ever.

The FCC's quaint talk of "time channeling" betrays an old-fashioned bureaucratic mindset. It seems regulators have not come to terms with an entertainment world in which a wide variety of programming is increasingly available, via DVDs, DVRs, downloads and video on demand, whenever viewers want to watch it.

The route taken by that programming, whether over the air or over the Internet, through TV cable or through phone lines, by mail or by satellite, into computers or cell phones or iPods, should be legally irrelevant. Logically, the government has to choose between a lot more censorship and a little more respect for parents.