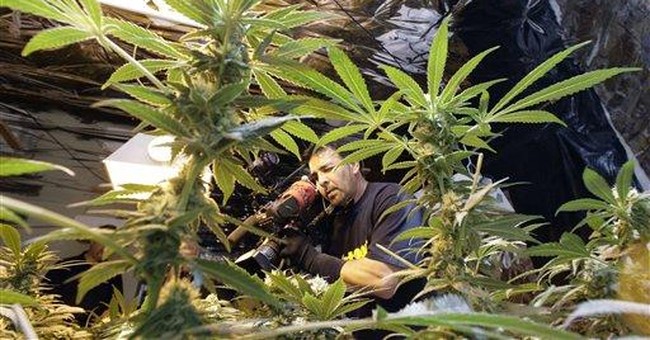 I'm not sure how you make something seem glamorous by linking it to a product that everyone knows is aimed at kids. Such scattershot, contradictory arguments are a sign that the moral panic over products like Kronic Kandy and Stoner Pops is building. Several jurisdictions, including Chicago, already have banned cannabis-flavored candy; Georgia is on the verge of prohibiting sales to minors; and legislators in other states have proposed their own restrictions or bans.

Before the whole country is overwhelmed by the urge to prohibit anything that tastes like pot, let's pause to consider the aim of such legislation. Ban proponents do not claim the candy itself is dangerous. Rather, they object to the ideas it represents.

The crusade against marijuana-flavored sweets, some of which contain cannabis flower essential oil but none of which is psychoactive (leaving aside the effects of the sugar), is reminiscent of the Drug Enforcement Administration's failed attempt to ban food products made from hemp seed. That reinterpretation of the law, which the courts rejected, seemed to be motivated by antipathy toward anything associated with marijuana. Anti-drug activists such as Calvina Fay still lump hemp foods together with marijuana-flavored candy as part of "a sub-culture that glamorizes and promotes drug use," saying both should be banned because of the message they send.

And what is that message? According to George Crawford, coordinator of the Atlanta-based Coalition Against Chronic Candy, "Marijuana-flavored products are a threat to our youth because they give the false impression that marijuana is fun and safe." Yet marijuana is fun and safe, if "safe" is understood to mean acceptably risky, as opposed to completely risk-free. In terms of acute poisoning, driving impairment and long-term health damage, marijuana compares quite favorably with alcohol.

The president of a New Jersey company that stopped making pot-flavored lollipops under government pressure once noted that Jelly Belly sells "pina colada" and "strawberry daiquiri" jellybeans. "Is that creating an environment for kids to become alcoholics?" he asked. Tom Murphy of Vote Hemp, which promotes the hemp industry, notes that a company based in Atlanta, currently the center of agitation against cannabis-flavored candy, makes a highly popular coca-flavored soft drink that's marketed to children.

Unlike cocktail-flavored jellybeans and Coca-Cola, of course, pot pops are marketed based on their drug connection, under slogans such as "tastes like the real deal" and "every lick is like taking a hit." Yet the distributors plausibly maintain that their target market is young adults in the 18-to-24 range for whom cannabis already has positive connotations. "It's not just a candy," says the Chronic Candy slogan. "It's a lifestyle." Although some customers may genuinely like the taste of marijuana, people who buy these products are also making a fashion or political statement.

Those statements understandably offend supporters of the war on drugs, who try to conceal their censorious aims by pretending it's all about the children. Crawford, whose group's Web site features a photo of an angry-looking baby sucking on a bright green lollipop, suggests that cannabis-flavored candy may "fall into the hands of unsuspecting youth" and "serve as a gateway product for future marijuana use." A Pennsylvania legislator says "it is really frightening to develop a taste for marijuana in children through lollipops."

Such warnings fundamentally misconstrue the appeal of both marijuana (which people do not smoke mainly for its flavor) and candy that tastes like it. It's marijuana that makes the candy cool, not the other way around.

And what makes marijuana cool? To a large extent, the government's efforts to prevent its consumption. The legal moves against marijuana-flavored candy can be expected to have a similar effect.