Congress hastens the return of `No gas today' signs 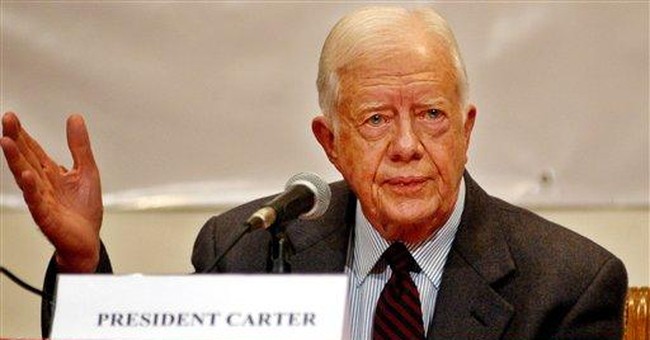 What do Richard Nixon, Jimmy Carter and the ancient Roman Emperor Diocletian all have in common? They all imposed price controls on their respective economies. When Presidents Nixon and Carter embraced government-imposed gasoline price controls for the better part of a decade, consumers paid the price in terms of shortages, rationing and long waiting lines. In contrast, succeeding administrations from Presidents Reagan to Clinton did not, and the performance of the economy under their collective watch proves they were correct.

Why, then, is Congress considering a return to the failed policies of the 1970s? Consumers are frustrated and challenges exist with respect to needed energy policy reforms. Yet under the guise of addressing gasoline "price-gouging," legislation is being debated in Congress that could march us back to the days of seeing "No gas today" signs at every intersection.

Whether well-intentioned or politically motivated, price controls ultimately result in harsh unintended consequences, including shortages in the market and unnecessary economic hardships for consumers. Further, these proposals do nothing to address the core issues related to high gasoline prices: the need for greater supply and expanded domestic refining capacity to meet ever-increasing demand.

Vote-conscious policymakers who are so intent on taking immediate action could rescind the average 42 cents of federal and state taxes that are tacked on to every gallon of gasoline, diesel and jet fuel. Yet this is highly doubtful ince they consider that "their" money.

When demand is high and capacity is reached without the ability to increase supply, we are faced with either shortages or high prices. In seeking to address the latter, current proposals would actually ensure the former.

Price controls are a proven means to hasten shortages and supply disruptions, the impact of which will be even harsher during times of disasters and emergency response. Think about the Carter era of long lines at gas stations in the 1970s and apply these memories to the events following Hurricanes Katrina and Rita. Even in view of the failed emergency response to these recent natural disasters, the outcome would have been far worse if fuel resources for evacuees and first responders were limited or nonexistent.

Couple the fact that domestic refiners are running at or near capacity with increased global competition for crude oil, and the need to leverage more domestic resources now off-limits and expand existing U.S. refineries becomes even more apparent. Government-imposed price controls, however, will create the opposite effect, likely compelling companies to reconsider future expansions at U.S. refineries. From a simple return on investment standpoint, punitive laws simply eliminate the incentive to do so. If legislation that includes price controls becomes law, numerous infrastructure plans around the country will be placed in jeopardy.

Current proposals also would lead to a sea of litigation for trial attorneys. Bills now being considered define price-gouging as when anyone can claim that the price of gasoline is "unconscionably high" or similar but equally vague thresholds. The result could be 10 years in prison and $150 million in fines for any "person" in the distribution chain … from the gas station owner to the refiner. Basically, sellers of gasoline would set prices and wait to see if anyone complains. This presents a Catch-22 scenario that would be laughable if it were not so seriously close to becoming reality.

Just as alarming are the national security implications. Without increased domestic capacity, we will soon find ourselves not just dependent on foreign sources of crude oil, but also gasoline and other finished fuel products from refineries in the Middle East, China, India and elsewhere. To put this in context, the United States currently imports 10 percent of its gasoline from foreign sources; after Hurricane Katrina, this figure shot up to nearly 30 percent.

Unlike domestic refiners, foreign gasoline suppliers have the option of forgoing the U.S. market if price controls are imposed and prices are too low compared to other markets abroad. This would result in one of two scenarios: Either we face significant national shortages or we are held hostage by foreign suppliers, including nations such as Iran and Venezuela.

The effects of price controls in the United States are well-documented and nearly unanimous in their failure. Days after taking office, President Reagan issued an executive order ending energy price controls. Later, he vetoed a bill that would have created standby price and allocation control authority. The administrations of President George H.W. Bush and Bill Clinton maintained this wise approach. The result? The real price of gasoline didn't rise above its 1981 level again until 2000.

If the goal of "price-gouging" legislation is solely for the sake of political expediency, proponents are set to succeed. However, if these proposals are being offered as a legitimate means to actually lower gasoline prices or address our broader energy challenges, history has already shown that they will fail miserably.