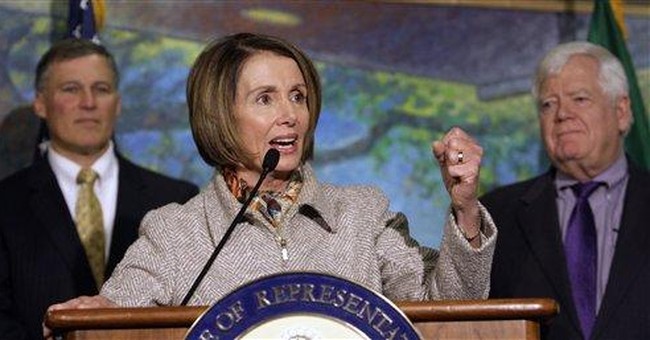 On election night, Nov. 2, 2010, less than 12 months away, Speaker Nancy Pelosi might rue her victory celebration this past Saturday.

Pelosi, attired in a regal red dress, presided over the vote on the Democratic health care bill last Saturday night. The vote complete, she victoriously announced the bill's narrow passage by 220 to 215. Minutes later, Pelosi began the celebratory press conference with the exclamation, "Oh, what a night!"

That same statement might be the theme for next year's mid-term elections.

The final vote for the Democratic health care bill included 176 Republicans and 39 Democrats voting no, with 219 Democrats and one Republican voting yes.

The lone Republican vote came from Rep. Joseph Cao, R-Lou. a first-term congressman from an overwhelmingly Democratic district in New Orleans. The last Republican congressman elected from this district was Hamilton Coleman in 1888. According to the Cook Partisan Voting Index, this district is the most Democratic-leaning district that is currently represented by a Republican.

Cao understands he is in an unusual situation and understands his constituents can vote him in, and out, of office.

He was elected with 50 percent of the vote in a special election, replacing Rep. William Jefferson (yes, the man who was found with money in his freezer). The district, which is 64 percent African American, voted 75 percent for Barack Obama. The district has 22 percent uninsured, which is 50 percent higher than the national average. Cao, who according to The Washington Post has voted with the Republican Party 80 percent of the time, crossed the party line and voted for his constituents and, according to him, his conscience.

The Democratic Congress, primarily along party lines, had defeated the Republican health care alternative earlier in the day. With no other option, Cao voted yes.

This attempt at claiming bipartisanship is disrespectful to the American people. They understand that one person crossing party lines does not bipartisanship make.

The passage of the Stupak Amendment, which prohibits abortion insurance coverage in the public insurance option and in private plans that accept people who are receiving government subsidies, was the last hurdle for Cao to vote yes for the Democratic health care plan.

The amendment passed, by 240 to 194. Rep. John Shadegg, R–Ariz., voted present, the remaining 176 Republicans voted for the amendment, as did 64 Democrats.

Pelosi continued during the celebratory news conference, "We are proud to take responsibility and credit for this great victory because it was obviously largely with Democratic votes."

That's good news. While Pelosi's district is a Democratic stronghold, many of the Democratic House members who voted for the Democratic health care bill are in districts that mirror more closely the national sentiment.

This will create an exciting 2010 election for many of the Democratic House members who voted for the bill.

"Republicans have moved ahead of Democrats by 48 percent to 44 percent among registered voters," noted a Gallup Poll released Tuesday. This year, "independents' preference for the Republican candidate in their districts has grown, from a 1-point advantage in July to the current 22-point gap."

Next fall, plan on seeing clips of Pelosi's congratulatory news conference during which the Democratic side takes responsibility and credit for the passage of a health care bill that provides for large government intervention and control in an enormous sector of our economy. It will be replayed and replayed in many districts where there are close elections.

Like Cao's district in Louisiana, the constituents in all districts determine whom they will send to Washington to represent them in Congress.