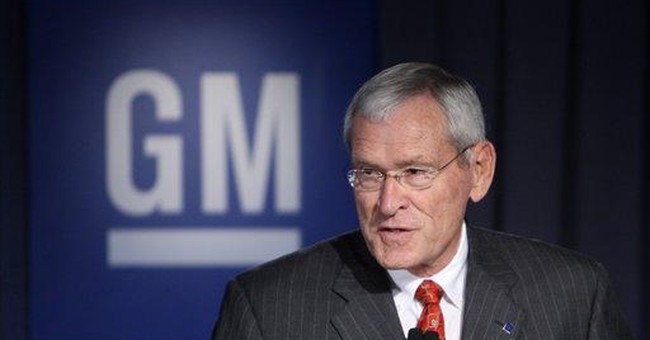 In the 1960’s, General Motors held more than 60 percent of the United States market share in cars.  This past week, the American taxpayers, (via the U.S. Treasury), became the majority owner (60 percent) of the Vehicle Acquisition Company, soon to be renamed the General Motors Company.  “By the end of the year, the government will have poured $50 billion of taxpayer money into the automaker,” according to the New York Times article (July 10) that bore the headline: “With Sale of Good Assets, G.M. Out of Bankruptcy.” The plan calls for GM maintaining a market share of 15 percent to 17 percent.

This is just the latest in a string of activities that, little by little, is immunizing the American public to accept government intervention, despite our historic tradition rejecting it.  It’s the culmination of the idea that this is the way it has to be because the company is too big to fail. The overall assumption is that the government will make sure that the taxpayers will be taken care of.

America’s history is one of personal responsibility, entrepreneurship and innovation, risk-taking and hard work.

Government – “more, bigger, better” might be the new slogan.

The current budget, which President Obama has touted as halving the deficit over time, does so only because it first triples it.  The current budget plan has the debt increasing from a total of $10 trillion last year to more than $16 trillion in 2012.

This spending of our money continues.  According to a U.S. Government Accountability Office report regarding TARP money, “As of June 30, 2009, … Treasury has approximately $328 billion remaining under the almost $700 billion limit.”  The result is that the Congress is now arguing how to best allocate that remaining money.

The Associated Press recently reported that “American International Group Inc. is consulting with the federal government about its plans to pay millions of dollars in retention incentives and bonuses.”  The credit facility for the company – another company labeled too big to fail -- has increased from $85 billion last September to $182.5 billion today.  “Too big to fail” has turned into “too big to manage without government approval.”

Another recent government encroachment is a tax increase masquerading as an environmental solution.  According to the Wall Street Journal, (“The Cap and Tax Fiction”, June 26), the Waxman-Markey bill represents “the biggest tax in American history.”  What better way to get a tax passed than to say it’s good for Mother Nature.

While the Obama administration is persistently moving the country leftward through policies, Gallup has recently reported that, “Americans, by a 2-to-1 margin, say their political views in recent years have become more conservative… all three major partisan groups indicate that their views have shifted to the right.”

So, while the country is moving to the right, the administration is moving in the opposite direction. The Gallup report concludes that, “for those seeking to understand why the Republican Party suffered such major election losses, they may find that political ideology has very little to do with it.”

What does it have to do with then?

President Obama, the Democratic leader, has stayed on target, continued along his path and acted consistently even-keeled and professional – sure of his positions and policies.  While often at odds with facts and reality – he is surely sure that his reality is real.

Possibly, leading the country isn’t as much about dealing in reality, as it is about having the conviction that how you represent your version of reality is what actually matters.

What’s at risk?  That the nation too will become immune to reality, and believe that more, bigger better government is the answer to all problems.

“Passive immunity lasts only for a few weeks or months,” notes the Centers for Disease Control and Prevention’s Web site, “only active immunity is long-lasting.”  Let’s hope that, in seeking to recover from the economic malaise that is infecting the nation, this administration’s current transfer of antibodies against reality is passive, not active and will soon be over.

In the meantime, we might want to ponder: Just as style is much more about how clothes are worn than it is about the clothes themselves,  – maybe we should realize that good governance is not only about policies, but also about how, and by whom the policies are communicated.

The GM line of cars of the 1960’s was expansive and represented the dreams of many Americans turning into reality.  Let’s hope that when reality dawns, that the GM car sitting in our nation’s carport today is not a lemon but sparkles in the sun, and performs on the road.