When is comes to neighbors, fences can be offensive 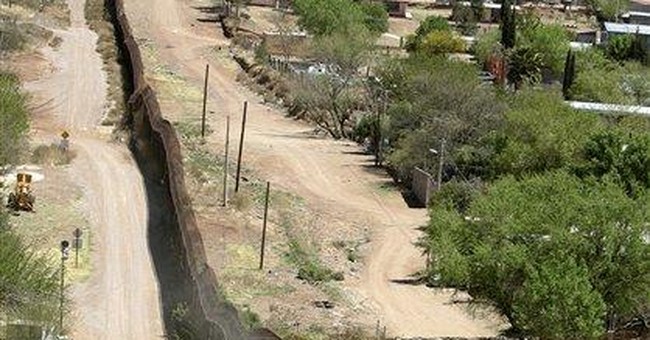 The influx of illegal immigrants is due to the higher relative concentration of opportunity (on the U.S. side) and a relatively permeable membrane (the border).

Over the long term, each of these areas needs to be addressed to create a stable immigration pattern.

Enforcing current immigration law would result in lower opportunity for illegal immigrant workers. Illegal immigrants leave their families and brave long treks in the desert or over mountains to reach the United States because they know they can find work here.

Our current enforcement might be termed the “wink and a nod” enforcement. People talk about how employers should enforce immigration law, but then turn their heads, and wink and nod, as a lawn service, painting company, cleaning service or installation crew staffed by illegal aliens working for a subcontractor does the work.

The second area to address is border security. The simple fact that millions of people have entered our country illegally is proof that our borders are not secure.

Count me among the millions of people in the United States who want secure borders. It would be helpful to know who is entering our country and whom we should keep out.

However, I am not quite convinced that we should install a fence.

Recently, I drove through the entrance of a gated community with my children, and thought about the signals such communities send. They remind me of the fiefdoms of times past in England and Scotland and the forts that were build in the Old West to keep settlers in and Indians out. Gated communities are intended to separate those who are allowed to pass through the gates (insiders) from those who are not (outsiders).

In contrast, vibrant, healthy communities are areas where people of mixed backgrounds live together. While there may be a distinction between classes, everyone intermingles, and there is interaction and impact in peoples’ daily lives. For people to progress, they need to meet each other, talk to each other and work with each other. It is hard to hate those whom you work with side by side. It is easy to hate those whom you never see.

If the two groups did not interact, why would those inside the gates pay attention to the problems of those outside the gates? To solve problems, you first have to know that they exist, then you have to care enough to do something about them, and finally you have to be able to work with those who have the problems to help implement a solution.

As for those who live outside the gates, what incentive would they have to improve if they had no hope that doing so would improve their lots in life? If you grow up in an environment where you are told that you cannot interact with others, and you are cut off from those who have more, why would you expect that you could improve your lot in life? Who would be your role models? If there is no hope, there is no incentive to work toward progress.

We want to keep terrorists out, and a fence might be one way to do this. However, we need to question whether the United States, in building such a fence, would be setting up a gated community on a world stage. Would it lead the rest of the world to resent us more than they already do and, if so, what would be the long-term implications?

The final area to address is the opportunity in the illegal immigrants’ countries of origin.

The goal should be to keep terrorists out, but to allow others in at a rate that would allow the immigrant population to assimilate into the U.S. population -- not too fast and furious to upset the delicate balance that communities require to thrive.