Anniversary of an Outrage — Elian Gonzalez 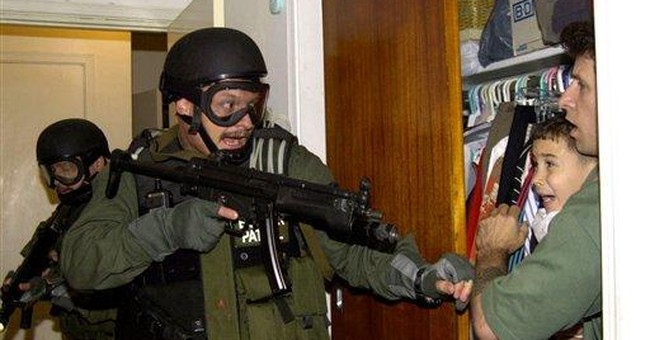 Castro’s Stalinist regime just released pictures of 16-year-old Elian Gonzalez, resplendent in the uniform of a Communist Party youth. The timing of the photo-release may coincide with the 11th anniversary of Elian’s shanghaiing from the U.S., which hits on the 22nd of this month.

The magnitude and methodology of the snow-job Fidel Castro, with the aid of his ever-faithful MSM and Democrat allies, pulled on the American public (69, per cent of whom fell for it and embraced Castro’s position on the kidnapping) is partly explained here.

Thanks to MSM-Castroite collusion most people forget (or missed) the crucial legal and ethical details of this circus/tragedy — which were mostly established during the first week after Elian’s rescue at sea, after his heroic mother’s drowning. The “son-belongs-with-his-father” crowd, for instance, “missed” (with the help of the MSM) that Elian’s father was initially delighted that his motherless son was in the U.S. and in the loving arms of his uncles and cousins.

The evidence — frantically buried by the mainstream media — was overwhelming. Mauricio Vincent, a reporter for Madrid newspaper El Pais, wrote that during that first week he’d visited Elian’s home town of Cardenas and talked with Elian’s father, Juan Miguel, along with other family members and friends. All confirmed that Juan Miguel had always longed for his son Elian to flee to the United States. Shortly after Elian’s rescue, his father had even applied for a U.S. visa!

In phone call after phone call from Elian’s Cuban family to Elian’s Miami family, the Cuban Gonzalez family always made themselves very clear: “Please take care of Elian. His father’s on the way....even if he has to row over in a washtub.”

The Miami Herald reported that on November 26, 1999, the day after Elian was rescued, Juan Miguel had obtained certified copies of Elian’s birth certificate and his marriage certificate to his deceased ex-wife, Elizabeth. These documents are the first order of business for Cubans seeking a visa to the United States.

Please notice the date — Juan Miguel was preparing for a Cuban exit before Castro intervened in the Elian case, which he did on December 5, 1999. Elian's Miami uncle, Lazaro, explained it repeatedly and best: “I always said I would turn over Elian to his father, when Juan Miguel would come here and claim him. But I (along with practically everyone with experience under communism from Cambodians to Hungarians and from Lithuanians to Cubans) knew such a thing was impossible. He couldn’t do that. I knew it wasn’t Juan Miguel requesting Elian--it was Fidel."

The legal-weasels forgot (or missed) that on Dec, 1st 1999 the INS asserted that Miami-based uncle Lazaro was indeed Elian’s legal custodian and Florida’s family court indeed the place to arbitrate further issues.

Then on Dec 5th, 1999, Castro clapped his hands and his MSM minions snapped to attention.

NBC’s Jim Avila piled on: “Why did she [Elian’s mother] do it? What was she escaping? By all accounts this quiet, serious young woman, who loved to dance the salsa, and was living the good life.”

Bryant Gumbel pointed the finger at the real enemy: “Cuban Americans have been quick to point fingers at Castro for exploiting the little boy. Are their actions any less reprehensible?”

Within weeks Clinton’s INS had turned its initial decision on its head. Within months this same INS was kicking down Lazaro’s door, pummeling camera men and elderly ladies to the ground with jackboots and wrenching a screaming Elian from his legal custodians in a blaze of pepper gas and machine guns. When asked for the legal authority for this, they brandished either a search warrant to seize evidence that didn’t exist (and would not have been hidden anyway.) or an arrest warrant to seize someone who no one claimed was a criminal or even a lawbreaker!

They never made it clear just what kind of "warrant” it was. And neither would it have been legal — as patiently explained by Alan Dershowitz (no less!)

On January 31, 2000, a Christian evangelical minister from India, the Reverend Kilari Anan Paul, visited Cuba. The reverend was closely following the Elian saga from his native India and was severely miffed by those malicious Cuban-exile crackpots in Miami. The reverend stood shoulder to shoulder with Castro on this one, completely in favor of the United States returning Elian to Cuba and his father, as every vestige of logic, legality and decency clearly dictated. Toward this noble end, the reverend attempted to meet with Juan Miguel Gonzalez at his Cardenas home — but found him under house arrest.

So why did Elian’s father change his tune?

Think of Juan Miguel as Frankie Pentangeli. The gun Fidel Castro held to Juan Miguel’s head was as invisible (to those without experience with Communism) as the one Mikey held to Pentangeli’s head was to most spectators at those hearings.

After Elian’s shanghaiing, the New York Times’ incomparable Thomas Friedman probably spoke for most of his colleagues: “Yup, I gotta confess, that now famous picture of a U.S. marshal in Miami pointing an automatic weapon toward Donato Dalrymple and ordering him in the name of the U.S.”

Sure, we’re getting plenty of Castro-issued pictures of Elian. But according to a BBC (no less!) story, access to Elian and his Dad hasn’t improved since the Reverend Kilari Anan Paul attempted an interview back in Jan. 2000.

"Attempts to interview Elián González come to nothing,” reported the BBC’s Ed Vulliamy from Feb. 21st, “Anyone approaching the house is questioned, photographers chased away."

"The Castro regime won't allow us to contact the boy,“ says Elian’s Miami uncle Lazaro Gonzales (who suffered ten years in Castro’s dungeons and torture-chambers) “and the entire family is forbidden to speak to us. Every time they detect a call from us in Miami, the line drops. I'd love to go and see Elián, talk to him. But they'll never let us.”