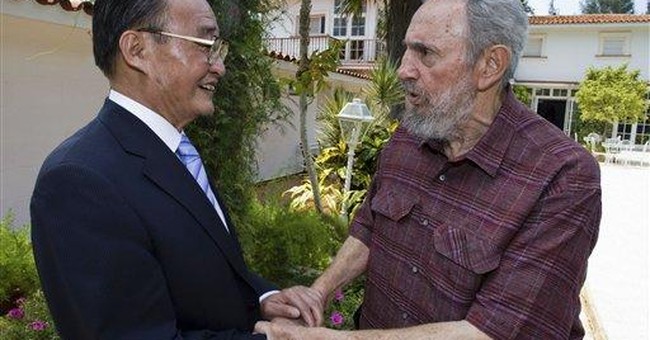 Unlike the old soldier Douglas MacArthur, the Old Media will not fade away gracefully. Instead they’ve chosen the Sunset Blvd route of Nora Desmond, minus the eccentric charm. In Sunset Boulevard you couldn't help but sympathize with Norma Desmond. She made nostalgia, senility and decrepitude slightly pitiable, but also charming.

The New York Times, plagued by plagiarism scandals, stock value and circulation heading for the sewer while it squirms under the thumb of a foreign robber baron, makes the same things shabby and pathetic. In last week’s Washington Post, former New York Times' senior editor, Howell Raines, while wheezing spitefully against his former competition Fox News, dramatized this shabbiness and pathos.

“Ed Koch once told me he could not have been elected mayor of New York without the boosterism of the New York Post,” writes Raines in his Washington Post piece.

Raines implies that boosterism for a New York mayoral candidate is hideously tacky. A truly world–class paper’s boosterism should be employed (apparently) to help Stalinists set up their killing fields and gulags. To wit:

“A foreign reporter — preferably American (meaning the New York Times’ Herbert Matthews) — was much more valuable to us at that time (1957) than any military victory. Much more valuable than rural recruits for our guerrilla force, were American media recruits to export our propaganda.” (Ernesto “Che” Guevara in his diaries.)

“In a bygone era of fact-based commentary typified, left to right, by my late colleagues Scotty Reston and Bill Safire, these deceptions (by Fox News) would have been given their proper label: DIS-information.”

Not to be confused with the impeccable IN-formation printed (not as commentary, but as a gold-backed news scoop) on the very front pages of the New York Times by Scotty Reston’s colleague in July 1959: “This is not a communist revolution in any sense of the word,” wrote Reston’s colleague and the New York Times' senior man in Cuba, Herbert Matthews from Havana itself. “Fidel Castro is not only NOT a Communist, he is decidedly ANTI-Communist. In Cuba there are NO COMMUNISTS in positions of control.”

For months by this date, Fidel, Raul and Che had been repairing to their respective (stolen) Havana mansions nightly and conferring with Soviet GRU Agents to button down the Stalinization of Cuba. Indeed, Raul Castro had been supervised by a KGB handler since 1953 and when arrested in Mexico in 1956, Ernesto ‘Che” Guevara was found to have, in his very wallet, the calling card of the KGB’s top Latin American agent, Nikolai Leonov.

Though all of the above had been repeatedly reported in Cuba’s press for over a year, none of these intriguing data seemed to fit the New York Times’ category of: “all the news that’s fit to print.” And this was smack in the middle of the hottest years of the Cold War.

“Why has our profession, through its general silence – or only spasmodic protest – helped Fox legitimize a style of journalism that is dishonest in its intellectual process, untrustworthy in its conclusions and biased in its gestalt?” laments Raines in the same article.

Apparently, a truly world class paper’s “style of journalism” should serve to make it truly “trustworthy” as a propaganda arm for a Stalinist regime’s KGB–trained secret police; getting its marching orders, then hunting-down and character-assassinating those on the Communist regime’s enemies-list. To wit:

One day in May 1959, only five months after the triumph of Castro's glorious Revolución, proclaimed as “democratic and anti-communist” by the New York Times, Castro's own Air Force Chief, Major Pedro Diaz-Lanz begged to differ. He told his friend Eddie Ferrer, "I've got to tell the Americans and the world what's going on here and start the fight against these communists. Everybody seems asleep!"

A week later Diaz-Lanz resigned his post and declared publicly that Castro's civilian government was a hollow sham, nothing but a front (maintained with the then invaluable assistance of the New York Times) for Soviet-trained Communists who were running the show behind the scenes, especially in the crucial functions of the military and police. Diaz-Lanz then bundled his wife and kids onto a small boat and escaped to Miami just ahead of a firing squad.

Mr. SOURWINE. But Fidel Castro has said on many occasions [as dutifully transcribed and transmitted by the New York Times] that he is friendly to the United States. You are saying that this is not true?

Major DIAZ. He is lying.

Mr. SOURWINE. You know there are many [the New York Times foremost among them] who say that Fidel Castro is not himself a Communist.

Major DIAZ. I am completely sure that Fidel is a Communist.

Mr. SOURWINE. You are completely sure that Fidel Castro is what?

Major DIAZ. That Fidel Castro is a Communist. Also, I'm prepared because the Communists have a well-known system of trying to destroy the reputations of anyone who disagrees with them.

After Diaz-Lanz testimony, Castro's U.S. media auxiliaries (who earlier, like their boss, ignored Diaz-Lanz, hoping he'd fade away) got their marching orders and spit on their hands. They suited up, slid down the pole, and gunned the engines. Naturally the New York Times revved up first: This is not a communist revolution in any sense of the word,” quickly wrote the New York Times senior man in Cuba, the redoubtable Herbert Matthews, from Havana itself. “In Cuba there are no communists in positions of control,” he stressed. “The accusations of Major Pedro Diaz-Lanz are rejected by everybody.”

But as Diaz-Lanz warned, when outing Communists, their denial is only half the story. The truth-teller must also be slandered, smeared, defamed --his character assassinated as surely as the hundreds of men and boys then being physically assassinated by Che Guevara's firing squads.

Not to worry! The New York Times was eminently worthy of the task!

"Sources (Castro or his henchmen) tell me that Major Diaz-Lanz was removed from his office for incompetence, extravagance and nepotism," continued Herbert Matthews' front-page article in the New York Times on July, 16 1959 (the very day following Diaz-Lanz’ testimony!) "Fidel Castro is not only NOT a Communist,” continued the New York Times front-page story, “he's decidedly ANTI-communist."

And Castro's U.S. propaganda minions were just warming up. The New York Times had sounded her bugle. Now the rest of the media pack rushed in behind her (remember, this was 1959), yapping and howling and wagging their tails, panting to join the hunt. They were all too eager for a chance to mob and maul a man who risked his life and went stone-broke to warn America about what turned out to be the gravest threat in her history.

"It's an outrage that Congress should give a platform for a disaffected Cuban adventurer to denounce the Cuban revolution as Communist!" barked Walter Lippmann a few days later in the New York Herald Tribune. "It would be an even greater mistake even to intimate that Castro's Cuba has any real prospect of becoming a Soviet satellite," (italics mine) Lippmann stressed a week later in a Washington Post (who published Raines recent lamentations).

Lippmann's Pulitzer Prize the year before, by the way, noted "his distinction as a farsighted and incisive analyst of foreign policy" (italics mine).

The Atlanta Constitution yapped next: "Major Diaz-Lanz is simply a disgruntled soldier-of-fortune," wrote its chief editor and publisher Ralph "Conscience of the South" McGill (who was in Havana at the time, schmoozing it up with Fidel and Raul). "Reliable sources tell me that Major Diaz-Lanz has been involved in clandestine money-making activities," McGill continued. "Diaz left Cuba because he was involved in black-marketing."

In 1964, LBJ decorated this filthy propagandist and smear-artist with the Presidential Medal of Freedom. "The desire for individual dignity and freedom is in the genes of all mankind," proclaimed McGill during the solemn ceremony. Yes, Mr. McGill – and amazingly enough, even in Cuban genes. Ask the thousands of Cubans riddled by firing squads yelling "¡VIVA CUBA LIBRE!" while you and the New York Times carried water for their murderers.

In wistful moments, I imagine Rush, Beck, Hannity, Breitbart, etc. on the U.S. media scene when Pedro Diaz-Lanz burst upon the U.S. political scene with some pretty important revelations. Might his revelations have gotten more and better airplay? Might they have influenced the idiotically Castro-friendly U.S. policy of the time?

Well, ask yourselves what traction O’Keefe’s expose of ACORN and Glenn Beck’s of Van Jones might have gotten, if from their mountaintop throne, Howell Raines long-time employers still decided what constitutes “all the news that’s fit to print.”