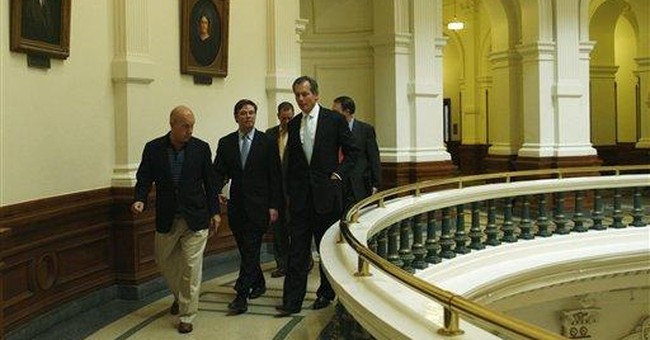 The Texas GOP is very close.

Early voting is underway in Texas right now and goes on through Friday. If you are a Texas GOP voter, go to TedCruz.org and find out where you can go and cast your vote for Ted Cruz.

If you know anyone living in Texas, call him or her up and urge them to go to TedCruz.org and find out where they can vote and to go vote for Ted Cruz, right now.

If you have $5 or $50 or $500 to spare to help the country back on to the right road, contribute via TedCruz.org or via the ActRight button at my own website if you want to contribute to Cruz and to other conservatives running for the United States Senate.

Winning the early vote in a big way will be important for Cruz’s insurgent campaign. Getting up and going –right now—to the early voting station is key to winning Tuesday.

Email your friends in Texas this column. The email it a second time. Then call them. That is what GOTV –get out the vote—is all about.

This is why a Ted Cruz win is so important on Tuesday.

It isn’t because his opponent, Texas Lt. Governor David Dewhurst, is a moderate or a RINO. Dewhurst isn’t a RINO. He is a good solid conservative.

But Ted Cruz is 42. David Dewhurst is 66. If they vote the same way –and they will—which is the better choice for Texas and the United States?

If you are the coach of an NFL expansion franchise, and you are offered Andrew Luck or Peyton Manning, which will you build your team around? Relative youth and energy matter too the rebuilding of the U.S. right now, and Cruz has the advantage on both counts.

Ted Cruz has been endorsed by Senators Jim DeMint, Mike Lee, Rand Paul, Pat Toomey and a host of other elected officials. Conservative luminaries from Sarah Palin to my radio brethren Sean Hannity and Mark Levin and yours truly have endorsed Ted Cruz. The wonderful Ed Meese –selfless and ever-serving—has endorsed Ted Cruz, and it is the Meese endorsement that ought to make you think about one more factor.

Ted Cruz is a very, very good lawyer, a superb originalist, a Paul Clement-like legal talent. We need more of those in the United States Senate, and not only for their votes cast there, but also for the near-complete immunity from filibuster service in the Senate bestows on them should they ever be nominated for the United States Supreme Court.

Imagine an increasingly obstructionist Democratic minority in the Senate led by a bitter former Majority Leader Harry Reid or an always hyper-partisan Chuck Schumer. (Not so hard to imagine about, is it?) If President Mitt Romney or the GOP president after him finds that this “last stand” caucus is blocking Supreme Court nominee after Supreme Court nominee, the president can always turn to the Senate for one of its own to be the nominee, provided their are sound originalists of the right age and talent there.

Even the radical obstructionists will blink at blocking one of their own. Sure, it has happened, with a Texas senator in fact, John Tower, when he was nominated by George H.W. Bush to be Secretary of Defense. Students of the Senate laugh now at the Democrats who broke the rule of comity towards their colleagues. The man who replaced Tower? Dick Cheney.

Thus was John Ashcroft confirmed to be Attorney General even after he was defeated for re-election to the Senate. The ways of the Senate are old, and very hard to break. If Ted Cruz is nominated to the highest court in the future, he will get confirmed.

In the meantime, Cruz will bring enormous energy, good humor and a love of the Constitution to the “world’s oldest deliberative body.” He is a “weather-maker,” like Marco Rubio, and like Marco Rubio, Cruz also represents the growing appeal of Republicans to Latino-Americans interested in expanding freedom and prosperity here and abroad.

So don’t wait another minute. Go cast an early vote for Ted Cruz right now. To repeat: If you are unsure of where you can do that, go to TedCruz.org and find out.

Then call your friends and family and urge them to do the same. The big win in November, the big win the country needs, begins Tuesday night, but the votes that will power that win are being gathered right now.

And don’t forget: Email this column to your Texas friends. Use the button. Tweet the link.

The U-Turn the country so desperately needs begins Tuesday.