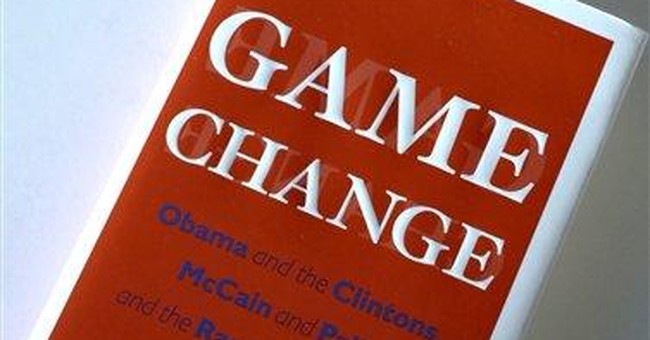 “Game Change” by Mark Halperin and John Heilmann is an entertaining book. However, it could have a been a great one had the authors not decided merely to hint at and tiptoe around the biggest untold stories of President Obama’s long march to the presidency. It is hard to figure out why the authors went so soft on some aspects of the president’s biography and campaign when they relentlessly pilloried him on other character issues throughout the book. Perhaps the duo from central MSM-Lefty casting wanting to try and maintain some favor inside Team Obama by treading oh so lightly on the president’s most sensitive spots, but the collective impact of their thousands cuts at the president and his team nevertheless deliver a devastating impact in that it arrives from obvious friendlies interested in trying to make everyone involved in Campaign 2008 look very bad other than Obama.

Halperin and Heilmann use brass knuckles on everyone, but they tried –unsuccessfully-- not to leave many marks on Obama. The bloodiest pulp is John Edwards, and not far behind the at-one-point-feared-to-be-suicidal-by-his-staff candidate is his wife, “St. Elizabeth,” described this way by the authors: “an abusive, intrusive, paranoid condescending crazywoman." (p.127) And a shopping addict to boot, guilty of "filling her house with unopened boxes containing items she'd bought online." (p. 139).

Hillary is portrayed as a head case, and a more prolific potty-mouth than ten Nixons. Bill is a cauldron of neuroses and jealousies. The account of George W. Bush, “43,” calling “42” to assure and console him that the incumbent knows his predecessor wasn’t a racist is priceless. (p. 227). The details the authors provide about “the burning speculation about Bill’s putative priapism” make the Enquirer seem tame. From the name given to Ron Burkle’s Boeing 757 to the details of allegations concerning Bill’s relationships with Belinda Stronach, Julie Tauber McMahon and Gina Gershon (pp. 47-49), the sex lives of the former president and current Secretary of State are used to push books, and the country should hope that the heads of state with whom Mrs. Clinton will be meeting in the next three years put the book’s salaciousness down to the needs of a couple of old media reporters-turned-gossip columnists to sell some hard covers while there is still a market.

Halperin and Heilmann despise the center-right media, and reflexively twitch out the tired slams at “the right wing freak show” and the “flying monkeys of talk radio,” even as they serve up big scoops of innuendo. However, there's no original reporting about the president’s past drug use, his ties to Tony Rezko and William Ayers, and his relationship with Jeremiah Wright. They never dig into the details of any of these episodes, but communicate clearly that they believe these associations to have been legitimate targets of first Hillary and then John McCain. All of these attacks and more originated from Team Clinton, by the way, not the right wing. Indeed Hillaryland’s obsession with the president’s past drug use appears again and again in the book, and these and other charges the former first lady made are wilder by far than anything heard on center-right media. (“In getting ready for that night [a debate] Hillary casually mentioned to her aides that she’d heard that Obama’s mother was a communist.” p. 239). Halperin and Heilmann blame old Syd Blumenthal for mainlining the most salacious stuff into Hillary’s veins, but it is the authors –not talk radio—who have dressed up all these charges and more about Obama and landed them on the New York Times’ best seller list.

The portrait of the president is really an effort in poison-pen pointillism, where hundreds and hundreds of razor sharp paragraphs combine to create a deeply disquieting picture of the new president. President Obama is presented as insecure and needy of reassurance (p. 25), self-important, cynical and megalomaniacal (pp 30-31), petulant and spoiled (p. 111), touchy and vain (p. 112), hypocritical (p. 119), overweening (p. 184) and deceptive (p. 120.) Hillary and Bill are used as mouthpieces for the conclusions that President Obama is an empty-suit elitist both vindictive and small. (p. 231, p. 241 and p. 267), but it is Halperin and Heilmann who are the hit men, delivering the private judgments and accusations to the public.

Obama’s team is an extension of their boss, willing to do “whatever it takes” according to Hillary, including playing the race card (p. 265), a regular obsession with Bill (p. 198) who considered Obama to be “an off-the-rack Chicago politician” who had “figured out how to have it both ways—appearing to be above bare-knuckled tactics while his team practiced them with a vengeance.” (p. 155).

Obama’s brain trust is cast as reptilian, especially Axelrod, “a master of the dark arts of negative campaigning.” (p. 119). At one key point in the campaign “David Axelrod likened Hillary to Freddy Kruger, and that made Obama laugh. ‘My God, these people never die,’ Barrack said.” (p. 229.)

The only parties that come off worse than the president and his supporting cast are the MSM, in the tank for Obama throughout the campaign, unwilling to ask even basic questions about Rezko and Ayers, the drug use or Jeremiah Wright. “How extreme was the infatuation of the press corps with Obama?” the authors have Bill Clinton asking rhetorically on p. 228. You can read the president’s very vulgar answer to his own question, but suffice it to say – a lot. “The Clintons talked about Obama’s drug use with some regularity in private, citing it as another example of the willful failure of the press to vet Obama” runs another complaint, this one on p. 161. Halperin and Heilemann deliver a scathing indictment of everything the press didn’t do in their coverage of the campaign. Though using the words of principals rather than themselves to blister their Manhattan-Beltway media elite colleagues, Halperin and Heilmann leave no line out of the indictment of the shabby professionalism of their increasingly irrelevant brethren in the newsrooms. There are so many stories in Game Change that never made it into the daily coverage of the campaign that the press assigned to the contest could fairly be judged to have all been rookies –or simply star struck. Hillary uses the term “cultlike” to describe Obama followers at one point (p. 265), concluding they had “drunk the Kool-Aid,” a charge that could have been leveled at the MSM given all the stories about Obama that went unreported throughout 2007 and 2008. )Hillary also believes that Obama cheated in Iowa by importing voters, a charge repeated by Bill on p. 179.)

Game Change leaves the reader feeling soiled by the tackiness of all involved, and very troubled that the MSM is simply out of the business of reporting. The biggest surprise of many? Not that Obama had a source inside the negotiations that led to the bankruptcy of Lehman, or that Joe Biden had no idea who Sarah Palin was when she was named VP, or any of the many other jolts..

The biggest surprise is that, try as they might, Obama fanboys Halperin and Heilmann couldn’t protect the president’s carefully constructed image from the consequences of reporting accurately even the least damaging stories from Campaign 2008. Imagine the impact if the authors had actually looked into the Rezko ties or the Ayers' relationship, much less the Wright-Obama relationship, the president's past law practice, his academic performance or any of the still unknown questions about the 44rth president of the United States.