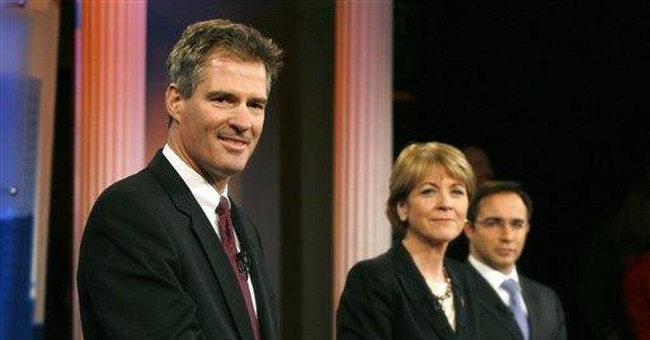 Long ago and far away, I was one of you.

I actually campaigned for Gerald Ford in Fall River, so I know what it is like to try and get an old JFK Democrat to even listen to an appeal from a Republican.

But especially if you are an old Democrat, you should be listening.

A vote for Scott Brown in the upcoming special election to fill Teddy Kennedy's seat for a brief period of time will save your Medicare.

You don't have to tell your family. You can pretend to have voted Democratic again. But if you want to save Medicare from the massive cuts that President Obama, Nancy Pelosi and Harry Reid have planned, you need to vote for Scott Brown.

It isn't forever. In fact you can vote Scott Brown out very soon, and perhaps a Kennedy will even run in the next election and you can get the seat back into the family's hands. Sure, all the Kennedys are dutifully endorsing her, but you know they feel this is very wrong. This is the Kennedy seat, and if it passes out fo the family to another Democrat there's no telling when another one of the family will get back to the chamber which was once home to JFK, Bobby and Ted.

You don't really admire Coakley now, do you? She is part of Team Patrick, and they have done a worse job in the Bay State than President Obama has done nationally.

She hates the Red Sox. Well, maybe not, but she still is setting the worst example of any candidate in modern Massachusetts history by refusing to campaign and ask for your vote.

The key though is the message you can send to the D.C. Democratic elites. if you vote for Scott Brown, the message received in Washington will be loud and clear: The D.C. Democrats have gone to far to the left and are threatening FDR's legacy and the senior citizens the Democrats used to protect and serve.

Dermocrats are fleeing D.C. with Senators Dorgan and Dodd quitting just this week. But the hard left leadership simply won't listen, simply won't push the president back to the center.

To make that happen and stave off disaster for Medicare and for Democrats in the fall, the party needs a sharp slap in the face.

You can give them just that. Massachusetts can send a message heard not just in D.C. but around the world. Again.

Scott brown. Think about it.