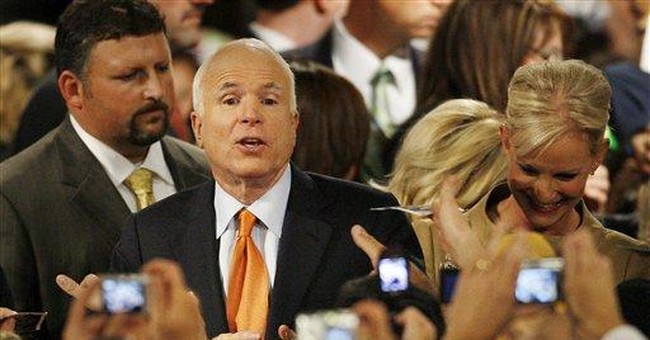 Yes, of course it is.

Three weeks ago John McCain was ahead, and a furious attack on Sarah Palin was underway.

Our stocks will recover if the American economy, powered by democratic capitalism's relentless innovation and productivity, is allowed to work its magic again.

That is the record of our often disparaged but inevitably triumphant attachment to economic liberty.

The task for John McCain between now and the time the last vote is cast on November 4 is to speak this truth and articulate this record and thus help repair the damaged confidence of a nation while making the case that the combination of a President Obama, a Speaker Pelosi and a Senate Majority Leader Reid poses a real peril to the ability of the American economy to recover.

Part of that challenge will be to hammer away at the record of Senator Obama when it comes to choosing his friends, colleagues and mentors. If Obama is elected, he will be tasked with bringing not just his luggage to the White House, but more than 3,000 appointees to the executive branch. Senator McCain must focus the American electorate on the record of Senator Obama in this regard, a record that includes some names that need to be familiar to the voters: William Ayers, Bernadine Dohrn, Rashid Khalidi, Tony Rezko and Jeremiah Wright, and one organization, ACORN, with which Senator Obama has been deeply associated with for the past two decades.

The Manhattan-Beltway media elite has obsessed on every absurd internet rumor and slander directed at Sarah Palin, but has refused to pull at the many threads in the Obama tapestry of experiences. Never have so few obvious questions been posed by the the last-gasp media gate-keepers. The inversion of the traditional role of the press --to discover and explore-- been inverted into an enabling protection racket. But the country is wired, and even though it is angry, it is hungry for information and answers and not indifferent to the identity of the man who would lead them for the next four years. The MSM has failed to be fair, but Senator McCain doesn't have to accept their rules or their absurd practices. For ninety minutes next week he must explain again and again that the roots of the financial crisis are in the practices pushed by ACORN and its accomplices on the Hill. Again and again he must raise the subject of the 3,000 colleagues of Obama that will arrive with him to take control of the vast federal machinery.

Senator McCain is best defined by his relentlessness when engaged. The message is a simple one: We ought not to trust our government and thus our country to this complex web of radicals and grifters, of social engineers and elites. McCain trusts America to do the right thing, but he must at least announce to them clearly and with great candor that the fork in the road on November 4 is unlike any the voters have approached before, and he must do so in the face of a terrific wind of bad news and as yet unfocused anger.

Sarah Palin has secured the GOP base, reminding it that the GOP is the party of middle America and traditional values. Senator McCain must deliver a message to those who don't think much about politics and who trust the government to do its best within the margins of the mainstream political debate.

Three weeks is an eternity, but while the beginning has been made, there is a long way to go. Straight talk has never been so necessary and so overdue.