Victory and Energy for the Second American Century: Cheering the Palin Pick 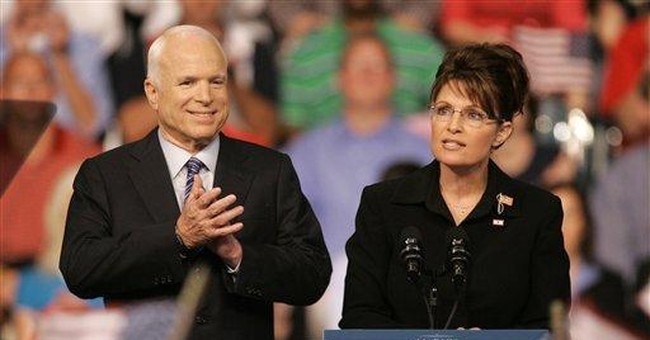 Conservatives are thrilled with the selection of Sarah Palin as John McCain's running-mate. Scroll through the postings at RobinsonandLong.com, or listen to the hosts and callers on any of the talk shows today.

There are six reasons, all of them huge and enduring.

First, over the past month we have gone from hoping Senator McCain would win to thinking he might actually be able to win. With the selection of Governor Palin most of us are convinced he will win. Which means the country will be well led on the war for at least another four crucial years. The reason behind this new confidence leads us to the second factor.

Sarah Palin is a real deal conservative, down the line, on all of the issues. This has the immediate effect of energizing the base to battle to keep the White House and to close the gap in or take back the House of Representatives. It is especially important that she is ardently pro-life, and the story of her family is certain to resonate with those values voters who prize faith and family as the center of life.

Third, the Palin pick guarantees that the party will remain a conservative party long-term. If Senator McCain had picked a pro-choice Republican or had asked his friend and great American Joe Lieberman to run with him, the party would truly have been split. That didn't happen, and Matt Cunningham summarizes the response among conservatives party activists:

McCain took a major step forward in exciting the GOP's conservative base at Rick Warren's forum. For example, I spoke with a prominent local conservative activist who was so enthused by McCain's performance who bought a plane ticket for Minneapolis the next.

The Palin choice boosts and accelerates that process. Like me, Palin is 44 years old. She came of age politically during the Age of Ronald Reagan. To a conservative movement that has grown tired and enervated, she has demonstrated you can run, win and successfully govern on conservative principles in the face of the government-accommodating Republicanism that has infected so much of the party.

Fourth, the GOP already owned the energy issue and and the energy issue dominates and will continue to dominate the next 60 days. Even if Sarah Palin doesn't persuade John McCain to come out for exploring ANWR now, a vigorous exploration/conservation strategy has an ideal spokesperson in Palin.

Fifth, she is not a Beltway Republican. The modern GOP is the party of Reagan and Bush --both westerners, and very outside-the-Beltway. Neither ever succumbed to the Beltway's many poisons.

John McCain is clearly outside of his party's recent tradition, much more of the Eisenhower, above-partisanship nationalist than the movement conservative, comfortable as a Beltway big, on easy terms with the permanent political elite of the country from both parties and the Beltway-Manhattan media elite.

McCain, of course, understands the war and is the steel for the next crucial few years of resolve that victory in the war requires. A Vice President Palin will be a voice for the conservative movement in the Administration and for the party outside of the Beltway. The long run of Congressional power drained a lot of the energy from the GOP when it came to the battle of ideas, and Palin is a representative of the non-Beltway GOP that wants very much to get back into that fray. Winning the war remains the first priority, and Supreme Court justices after that, but on a host of key issues Governor Palin represents the reagan wing of the party, and that's a great thing.

Sixth and finally, she is young enough to be a bridge to the next generation, and with five kids, she has been living in the world of young moms and technology-dependent teens. This advantage will be hard to quantify, but when she is out on the trail talking about her kids and her family's path, it will be a huge counterpoint to the Obama's narrative, one that underscores that millions of American families are conservative, traditional, proud of their country and full of optimism about the future if the government's burdens do not grow to large and the country's enemies are kept in retreat.

There is a lot of enthusiasm out there, and given these reasons, it will endure until November.