Memo for a Lingering Conservative: "Today We Are All Georgians" 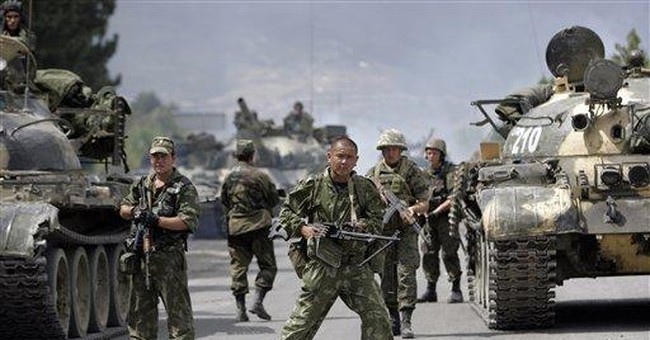 First, did you see McCain's strong and principled response to Russia's rape of Georgia? It was a great political moment because it was first and foremost a great American moment wherein a leader stood up for the victims of totalitarian aggression. If you were still having trouble getting motivated about the fall campaign, the crisis in Georgia should remind you of the stakes, and of how the occupant of the Oval Office can either rally the world or, with a call for U.N. mediation like Obama issued, declare the aggressor also the victor.

You still aren't over your disappointment that Fred or Mitt or Mike isn't the nominee? Have you read through the Obama response to the Corsi book? It was intended to bury Corsi but it in fact resurrected all of the doubts about Obama's background and shady pals. Skip the Corsi book and order David Freddoso's The Case Against Barack Obama for all the reasons you'll ever need to work hard against the Dalibama.

Still not off the bench? Do you want energy for the country's future? McCain's not there yet on ANWR, but after the Russian lurch towards Georgia's pipeline, the national security case for exploring ANWR got stronger. Perhaps McCain will save an ANWR announcement for his acceptance speech, but even if he doesn't, McCain is solidly behind both coastal exploration and rapid development of the scores of new nuke plants that we need.

Personally, I hope he names Romney as veep while announcing that he's putting Romney in charge of a team that will include the Secretaries of Energy and Commerce and charge them with revitalizing the country's energy and automobile sectors. If he does that and sends Romney off to ANWR in early September on a fact-finding trip and then on a week of intense talks in Detroit with the struggling captains of the car business, the already-stable McCain campaign will start to surge. The energy that the Romney organization would bring in places like Nevada and Colorado would be enormous, and the contrast of McCain-Romney to Obama-Anyone would be immense. We could actually win this thing.

Of course McCain could disappoint with the VP pick. We both know that. Recall Bob Dole picking Jack Kemp in 1996 --a one day burst of excitement followed by three months of realizing that sometimes you can be too smart when it comes to picking the VP. Right now some senior McCain advisors are arguing for Senator Hutchinson and others for Secretary Ridge, both of which would fall pretty flat with the online activists, which will be the first wave of reaction that will set the tone.

The McCain VP choice is really about where the GOP will head after President McCain, and thus a conservative with great political skills is necessary to encourage a dispirited base. You know I am talking about you, and keeping you in the game beyond the next two months. A President McCain will be all about winning the war and securing the country in the second phase of the long war. He will be focused on the military and on Iran and of course Russia and the PRC. He won't be much for party building. The conservatives will cheer McCain's seriousness abroad but will also need an ideas factory and a motivator in the Vice President's office, someone to charge up the think tanks and inspire the online legions.

But if McCain disappoints on the #2 --take a deep, deep breath before you scream. The stakes are way too high for huffing off stage right. St. Paul could be a great, great moment in the history of the GOP, or a bad few days to be overcome because the country needs a serious and experienced man at the helm during very difficult times that could get a lot worse before they get better.

If the veep announcement shocks you, or McCain has bad night on a debate or says "not now, not ever, never to ANWR," or anything else, keep a card in your wallet or purse, one that reads "Today, we are all Georgians."

You see, if that it was true when McCain said it, it means you have to work --all out and hard-- for his win, because the Georgians can't wait four years.