Do Conservatives Still Care About The Courts? 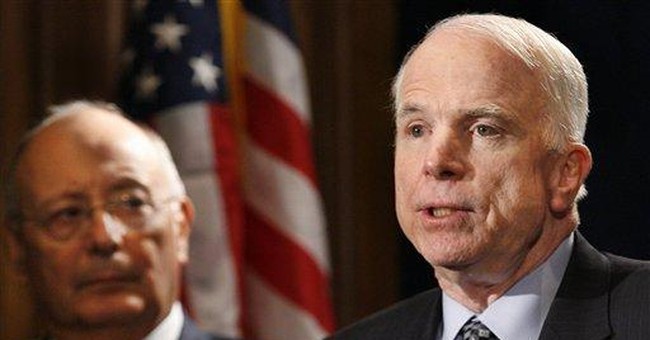 Which of the Republican candidates for the presidency is most likely to get "Soutered?" To nominate for the Supreme Court, not an originalist, but in fact the opposite. Those vulnerable to being Soutered lack an ear for or an interest in the inner ideology that all lower court judges keep carefully tucked away until they arrive on the Supreme Court of the United States where it is allowed to take full flight. It is hard work to get SCOTUS nominees right. Even when a president cares about the Court and the Constitution's interpretation by the nine deeply, he can still be flummoxed by the process. If he isn't passionate about it going in, it won't spring up in the course of his busy life in the Oval Office.

The first President Bush narrowed a field of Supreme Court candidates to Judge Edith Jones and then New Hampshire Supreme Court Justice David Souter. Though a good man and a sound conservative, George H.W. Bush picked the inscrutable Souter, and the ill-effects of this single decision linger on and on. Justice Souter is a man of the left, and a solid vote for the anti-originalists on the Court.

Not that this error was unique to "41." President Reagan elevated Justice O'Connor and Justice Kennedy, and though neither is a liberal, neither is an originalist in the mold of the old or new Chief, or Justice Scalia, Thomas or Alito. Unless a president has a passion for the Court's direction and an ear for the often convoluted statements of judges, or at very least extremely talented and experienced advisors whom he trusts who do have such skills, he will get Soutered. If a SCOTUS nominee is just a political decision designed to win a vote here or confer a favor there, the odds of getting Soutered increase immeasurably.

Senator McCain lacks the ear. He lacks the passion for the Court's future. His love of the approval of the Beltway elites almost guarantees a "consensus" choice for the Supreme Court if he is the one making it. And how hard could he fight for even a modestly controversial nominee? Senator McCain worked to save the right of a minority of the Senate to block any nominee --how could he ever argue against the power he deserted his party to preserve?

Looking forward to the next presidency, we see that Justice Stevens is 87, Justice Ginsburg 74, Justices Kennedy and Scalia 71, Justice Breyer 69 and Justice Souter 68. Perhaps all will be sitting in January 2013. Perhaps all will be retired. Voters who care about the Supreme Court ought to assume that the next president will have an impact on the future course of the Supreme Court greater than any president in modern times.

The Court of course affects every aspect of American life, from the conduct of the war to the protection of the unborn, the right to worship and speak freely, the right to bear arms and the right to be free from intrusive governmental oversight.

The Court can chose to protect private property or, as has been the case for decades, almost completely ignore this foundational right.

The Court is the country's future in many respects, and the president is the keeper of the court.

Which is why I cannot understand any serious conservative supporting Senator McCain's candidacy over that of Giuliani, Huckabee or Romney.

More than these three, Senator McCain could have made the court one of his causes through his long years in the Senate. He could have worked to repair the deeply shattered confirmation process. He could have used his immense standing with the MSM to assail the attack on the Judiciary's independence led by Tom Daschle, Harry Reid, Patrick Leahy, Charles Schumer and Ted Kennedy.

Senator McCain could have done this. But he didn't.

In fact, Senator McCain abetted that attack by undermining the great and thoroughly planned effort to delegitimize the extra-Constitutional filibuster of judicial nominees. John McCain declared first --to Chris Matthews of all people!-- with the Democrats and for the self-declared privileges of the United States Senate over the clear structure of the Constitution that called for confirmation of judicial nominees by majority votes. And when he could not persuade his caucus or the Administration of his position, he simply undercut them both and cobbled together the infamous Gang of 14.

These days Senator McCain and his allies make the stupendously disingenuous argument that the Gang saved a few Bush nominees and cleared the way for the confirmation of Chief Justice Roberts and Justice Alito.

This is risible. It insults the intelligence of everyone who recalls even the faintest outline of what happened.

Bill First had lined up the votes to approve a ruling from the Senate's Chair --Vice President Dick Cheney-- that judicial filibusters were out of order, a ruling that would have assured that every nominee that cleared the Judiciary Committee would receive an up or down vote on the Senate floor. After such a ruling and with 55 Republicans, each and every federal appeals court judge sent up by the president who could keep the Republicans on his or her side in the Committee would have been sent to the Bench. Had Democrats attempted to mount filibusters against Roberts or Alito, those efforts would have been smashed, and much damage done to the Dems in the process.

The GOP was poised to win a crucial round in the battle for the integrity of the courts and the restoration of sanity in the confirmation process. The GOP was about to strike a lasting blow for the rule of law.

John McCain blew that up. He stood with all the Democrats and six of his GOP pals for the self-declared powers of the Senate, against his caucus, his president, his party, and the millions of voters who had worked for control of the Senate so that the courts could be protected.

At the time as the instant outrage shook D.C. and ever since Senator McCain and his allies have argued that the GOP will someday praise his preservation of the judicial filibuster, though the GOP had only resorted to it once, and then only briefly and in a bipartisan fashion to stop a corrupt Abe Fortas from being elevated to the position of Chief Justice in the last weeks of the LBJ Administration. No Republican filibuster of a judicial nominee to a circuit court has ever occurred on the floor of the Senate, and it is extremely doubtful it ever will, because most Republicans are originalists and they understand that this is not what the Framers intended and further understand that the continued hyper-politicization of the confirmation process is an ongoing victory for the most radical elements in the battle over the courts. You cannot be against the Constitution while trying to save it, and you cannot defend the perks of the Senate's out-of-touch elites at the expense of the Third Branch and call yourself a friend of the Constitution.

What else do we know about Senator McCain's attitudes about the courts and the Constitution?

We know as well that Senator McCain's regard for the First Amendment is contingent. Thus McCain-Feingold, and of course Senator McCain's doubling down with his brief against Wisconsin Right To Life's right to speak its mind about judicial nominees. How can the Senator claim to be pro-life when on the two greatest issues the Senate has dealt with on the subject --judges and the right of pro-life groups to persuade the public-- John McCain has been against the interests of the pro-life community?

And the rule of law generally? The path to citizenship via the Z Visa was not a modest attempt to regularize a population in the country illegally. It was a wholesale abandonment of the idea that law breaking had serious consequences.

All of this and more is backdrop to the key question: What kind of Supreme Court justices would John McCain appoint if he was elected president?

They would certainly be better than those Hillary would appoint, which is why I will support Senator McCain should he manage to use the MSM to get the GOP nomination.

But there is no reason to believe that McCain nominees would be originalists. John McCain's heart isn't with the originalist movement. It cannot be. The Gang of 14, McCain-Feingold, and McCain-Kennedy can be read no other way.

Rudy would have Ted Olson at his side as SCOTUS candidates were evaluated. Mitt Romney would turn to Harvard's Mary Anne Glendon, his General Counsel as governor, the ardent pro-lifer Peter Flaherty and of course Wisconsin Right to Life's counsel James Bopp --a trio of pro-life superstar lawyers with a passion for the Court's future. Mike Huckabee's pro-life credentials are also gold plated. Each of them would approach the appointment of justices with an understanding of the enormous significance of those choices.

We have to assume that John McCain would view such appointments as he did the First Amendment when McCain-Feingold was being debates or the Constitution's advise and consent provisions at the time of the Gang --mere suggestions to be pushed aside if his own judgment inclined in an opposite way.

John McCain is a great American, but he is not an originalist when it comes to the Constitution. As the GOP moves toward the final decisions in its nomination process, it must remember that an attachment to the Constitution, once abandoned, is hard to reclaim. If it nominates John McCain, it sends into the fall a very weak candidate trying to rally a sullen base. If on the chance he wins --an unlikely event as he is increasingly understood to be another Bob Dole when it comes to campaigning-- no one should be heard to complain if his SCOTUS nominees come from the "center" as he seeks consensus and a second term.