The Climb and Decline of the Ancient Mariner: The McCain Encore 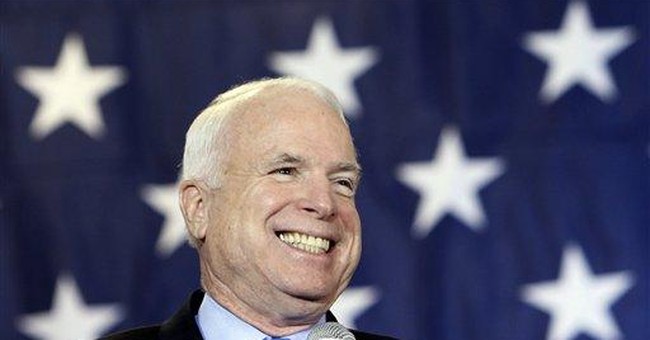 With Michigan, South Carolina, Nevada and Florida as rest stops on the way to Super Tuesday, and with the collective credibility of pundits and pollsters shattered after Obama's staggering, run-away win in New Hampshire, it has begun to dawn on the commentariat that they have no idea what is going on in the presidential race, and that voters may be troublingly insistent on casting ballots for whomever they want regardless of the results predicted by the pros.

The GOP side is particularly scrambled, and as poster Thunder at RedState illustrates by a look ahead at the February 5 winner-take-all states:

Rudy Giuliani is expected to win New Jersey and New York on Super Tuesday, February 5, 2008, and those states award their delegates on a winner-take-all basis.

John McCain will likely win Arizona, which is another winner-take-all state, giving him 53 delegates on Super Tuesday.

Mike Huckabee should win the winner-take-all state of Georgia, to earn him 72 points on Super Tuesday.

Mitt Romney is strong in the winner-take-all states of Massachusetts, Vermont and Utah, which yield a total of 96 delegates.

Fred Thompson can be expected to win the winner-take-all state of Tennessee, assuming he wins a majority of the votes, for a total of 55 delegates.

We can confidently look forward to waking up on Wednesday February 6 with every GOP candidate claiming some victories and many delegates, and the outline of a convention fight looming in the not-far-off distance.

No one is headed for the sidelines soon, not even Fred with the fewest votes cast in the first two contests, and certainly not Romney with the most votes and delegates as of today.  Even a second place in Michigan --another open primary like Iowa and New Hampshire in which the Republican preference is obscured by the votes of Independants and even Democrats-- won't sideline Romney, despite the demands of Manhattan-Beltway scribblers and talkers.  Romney raised more than $5 million the day after a second place finish in New Hampshire, and the campaign was energized by the obvious loyalty of the base Romney has built over the past year.  That base will harvest delegates from now until St. Paul and put Romney in a commanding position at the convention if he simply stays in the game, and may possibly deliver the nomination if he surprises anywhere between now and the end of voting in Texas and Ohio on March 4.

But what about the McCain surge and his big win in New Hampshire?   "John McCain will not get the base of the Republican Party," former Pennsylvania Senator Rick Santorum told me this week, and Santorum proceeded to list the ways in which McCain has rejected conservative policies over the years:

John McCain was the guy who was working with Ted Kennedy to drive it down our throats, and lectured us repeatedly about how xenophobic we were, lectured us, us being the Republican conference, about how wrong we were on this, how we were on the wrong side of history, and that you know, this is important for his…because having come from Arizona, knowing the strength of the Hispanic community, that we were going to be seen as racists, and he wasn’t going be part of that, that he was not a racist, and that if we were for tougher borders, it was a racist thing. Look, John McCain looks at things through the eyes, on these kind of domestic policy issues, looks at it through the eyes of the New York Times editorial board, and accepts that predisposition that if you are not, if you stand for conservative principles, there’s some genetic defect.

[McCain's] not with us on almost all of the core issues of…on the economic side, he was against the President’s tax cuts, he was bad on immigration. On the environment, he’s absolutely terrible. He buys into the complete left wing environmentalist movement in this country. He is for bigger government on a whole laundry list of issues. He was…I mean, on medical care, I mean, he was for re-importation of drugs. I mean, you can go on down the list. I mean, this is a guy who on a lot of the core economic issues, is not even close to being a moderate, in my opinion. And then on the issue of, on social conservative issues, you point to me one time John McCain every took the floor of the United States Senate to talk about a social conservative issue. It never happened. I mean, this is a guy who says he believes in these things, but I can tell you, inside the room, when we were in these meetings, there was nobody who fought harder not to have these votes before the United States Senate on some of the most important social conservative issues, whether it’s marriage or abortion or the like. He always fought against us to even bring them up, because he was uncomfortable voting for them. So I mean, this is just not a guy I think in the end that washes with the mainstream of the Republican Party.

This is the complete conservative critique of John McCain, and all the efforts by the MSM to encourage Republican voters to turn their eyes away from it will not work.  GOP activists and conervative loyalists have been poked in those eyes too many times by Senator McCain over the past eight years to lose the memories of those assaults.

Which is not to say that Romney will win the nomination, though I hope he does.  Fred Thompson rose up out of his political grave in last night's debate and hammered Mike Huckabee in terms every conservative understood to be devastatingly true.  And Rudy is waiting in Florida having successfully defined victory as victory there.  Huck will take his guitar and a sack of southern delegates to St. Paul, and his fans are indifferent to policy arguments.

What will decide this thing?  The Luntz focus groups on Sunday and Thursday night which went overwhelmingly to Romney and Thompson respectively tell us what Republican voters prize most of all: Fight in their candidates.  This may be because of what we know lies ahead in the fall, when not just an energized Dem nominee assaults them day after day, but when Soros et al unleash their tens of millions and the leftie nutroots scream BushCo and Halliburton at the top of their virtual lungs 24/7.  The GOP knows it will need a fighter full of energy and optimism who will both argue the case for Reagan conservatism and do so with the graciousness and charm that will be a sharp contrast with the angry left.

Which brings us back to Senator McCain.  His debate performance last night was wobbly, with meandering answers and an occasional grimace or misplaced wink.  He fell back on his tired answers and many were exact repeats of Sunday night's programming.  When he wandered through answer after answer it gradually dawned that he is indeed way past his prime, a Bob Dole without the energy.  Sure, he tramps from event to event, but at 71 he is not the same maverick he was at 63 when the McCain phenomenon swept New Hampshire and Michigan before running into conservative reality in South Carolina.  Even the McCain enthusiasts watch this aging warrior and know that he could no more win in the fall than Dole could in '96.  Politics is not exclusively a young man's game, but it is most definitely not an old man's game either.

A GOP vote for McCain is a vote for a shattered base and a desultory campaign in the fall. It is a vote for lecture after lecture on global warming, campaign finance reform, and the bridge to nowhere.  It is a vote for an old warrior way past his prime and the prospect of three debates against Barack Obama in which the age and energy gap goes unremarked upon while devastatingly obvious.

"[W]e’re looking at the media trying to make Barack Obama the president, and make John McCain the shill for him," Rick Santorum told me. "I think they know that John McCain can’t win this election," he concluded.